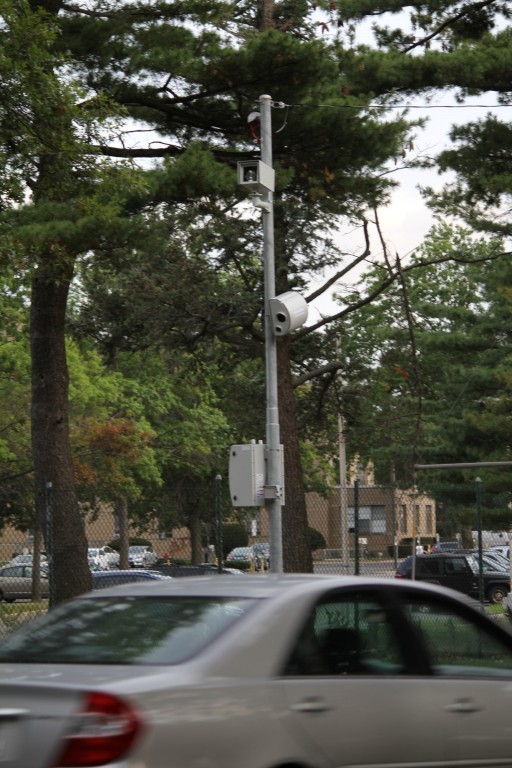 School speed cameras, like this one in East Meadow, have been a huge source of controversy since their September implementation by Nassau County. This week, lawmakers called to repeal the speed camera program.
Christina Daly/Herald
By David Weingrad

The cameras, which first went into operation in speed zones outside certain schools beginning Sept. 3, have been heavily criticized by residents, with many decrying them as a ploy to secure additional revenue for the county.

Motorists who exceed school speed limits by at least 10 miles per hour in camera-enforced locations between 7 a.m. and 6 p.m. on school days have been ticketed and fined $80.

On Dec. 3, Mangano announced that, effective Dec. 8, camera times would be adjusted from 7 to 9 a.m. and 2 to 4 p.m. on school days. Spokesman Brian Nevin said the change was made because drivers’ habits had changed drastically, citing a 70 percent drop in violations in November compared to September.

That same evening, Democratic legislators called for the repeal of the program, said Kevan Abrahams, of Freeport, and the Legislature’s minority leader.

On Dec. 9, Republican legislators, which outnumber Democrats 11 to 8, followed suit, announcing their own legislation to repeal the speed camera program at a press conference in Mineola.

Gonsalves, a Republican from East Meadow, said the legislation proposed by Democrats contained “technicalities” that needed to be corrected.

Gonsalves said that the speed camera program was implemented poorly, and that it never achieved its desired purpose. “The objective was to gain the public’s approval. That never happened,” she said. “The confidence of the legislators, as well as the public, was eroding day by day.”

She said she waited to call for a repeal until she met with acting Nassau County Police Commissioner Thomas Krumpter and received assurance that police would maintain student safety. “When I got that impression from the commissioner, I felt comfortable in doing the repeal,” Gonsalves said. “From the get-go, we were all interested in the safety of the kids. Revenue was secondary.”

Gonsalves added that she still plans to have flashing lights installed in front of schools to inform motorists they are entering a school speed zone.

Abrahams said Democrats first called for a suspension of the program in September, after receiving numerous complaints from residents.

In November, he said Democrats asked the Legislature’s bipartisan budget review office to conduct a study of each speed camera to determine its effectiveness, and to review if tickets were distributed erroneously. “It seems like [Mangano] knows something that we don’t know,” Abrahams said, “and I’m very uncomfortable with the program going forward without having that information.”

The next Legislative session is Dec. 15. If approved, the proposed legislation would take effect immediately, said Gonsalves, noting that Mangano has the option to veto it.