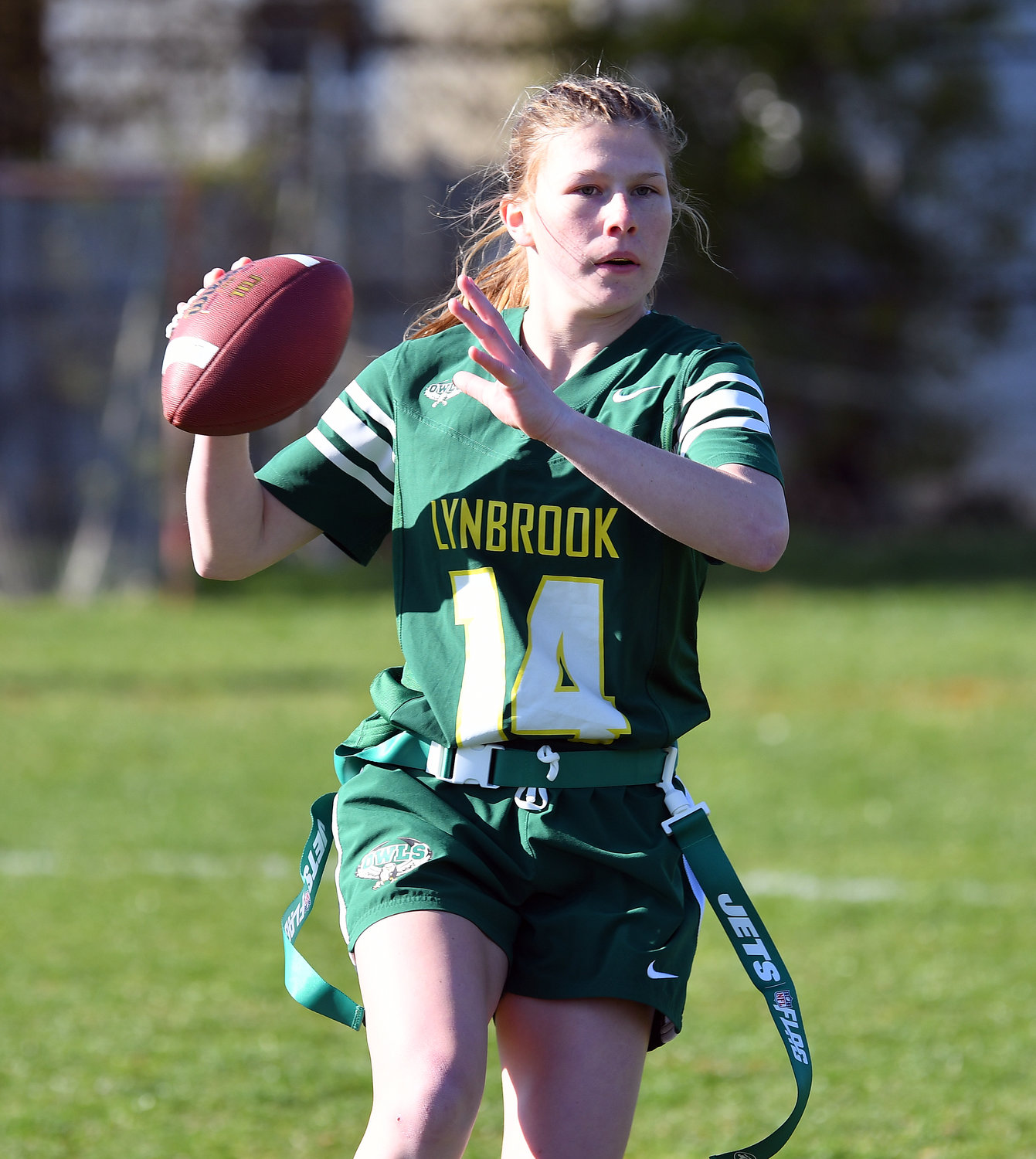 Lynbrook’s Kaelyn O’Brien had passing and rushing touchdowns in its win over Long Beach on April 28.
Neil Miller/Herald 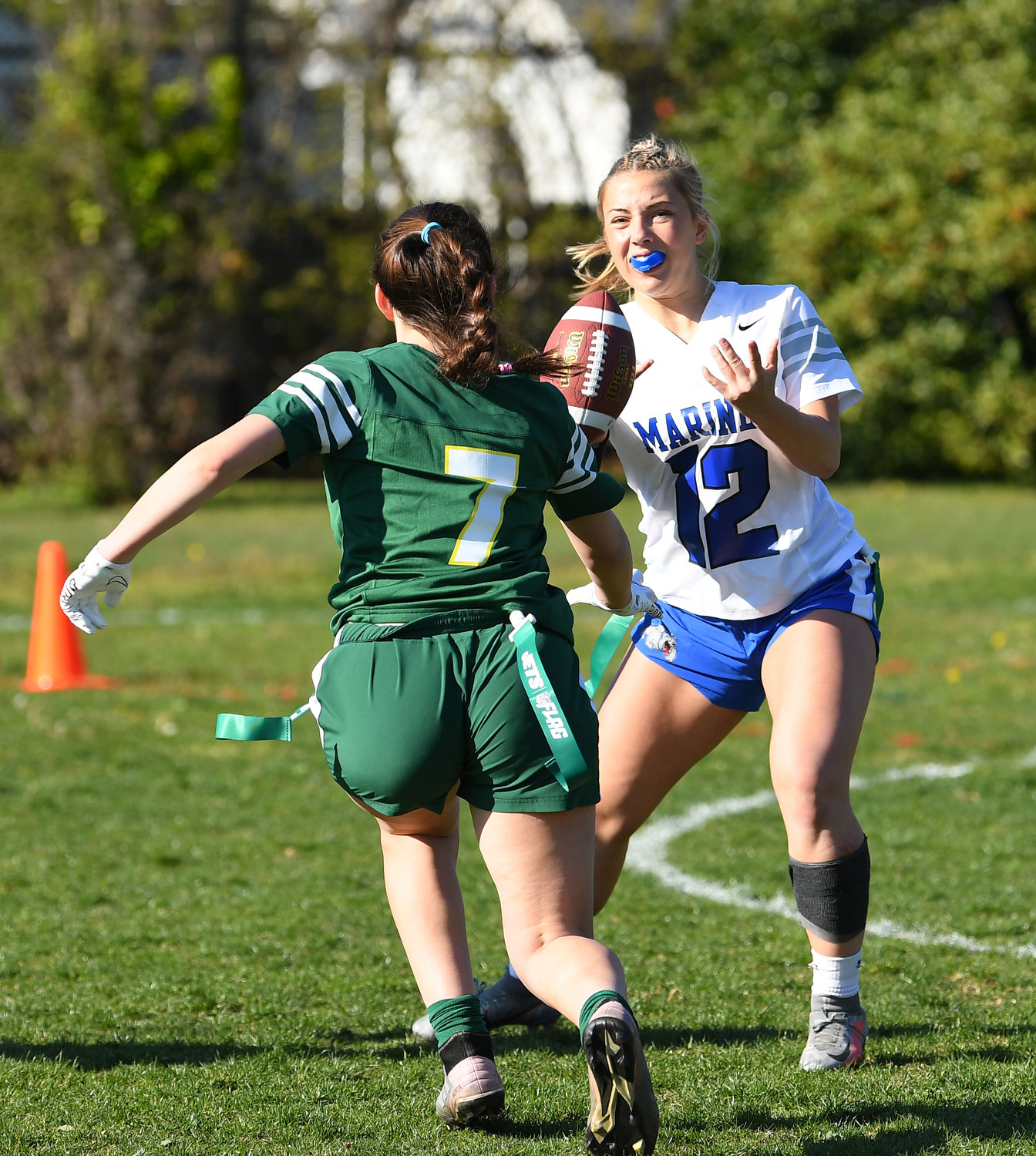 Lynbrook and Long Beach squared off April 28 for the first time in a girls flag football matchup in what both programs hope will turn into a long-lasting South Shore rivalry.
The inaugural meeting was dominated by Lynbrook against a short-handed Long Beach team, but the dedication to advance flag football into a growing sport on Long Island was apparent on both sidelines with full embrace of being pioneers for a new league,
“It’s a great experience and the girls are having a lot of fun with it,” said Lynbrook senior Izzy Sanchez, who caught three touchdowns in her team’s 41-0 home win against Long Beach. “It’s an amazing opportunity.”
The Owls jumped out to a 35-0 halftime lead in improving to 3-0 on the young season led by junior quarterback Kaelyn O’Brien, who threw one touchdown and scored another on the ground. Tyla Vuotto registered one rushing touchdown and also reached the end zone on a punt return. Mimi Berkowitz also ran for a score.
On the defensive side of the ball, Lynbrook held the Long Beach offense at bay aided by interceptions from Keziah Job and Mackenzie Casey. Job also recorded three sacks.


“The kids dominated in all facets of the game with offense, defense and special teams,” said Lynbrook head coach Rob Kolb, a former assistant college football coach at Stony Brook and the U.S. Merchant Marine Academy. “They are working hard and are buying into the offensive and defensive system.”
Long Beach, which entered the Lynbrook game at 1-1, was without some key players due to conflicts with other spring sports. Under the direction of head coach Lori DeVivio and assistant coach Rocky Butler, a former standout quarterback at Hofstra, the Marines are excited to tackle a new challenge while laying the foundation for a brighter future.
“I think girls flag football will make a major impact on Long Island,” said DeVivio, who played wide receiver with the New York Sharks in the World Professional Football League. “I’m excited about pioneering this initiative.”
Senior Alex Hastings, who missed the game against Lynbrook due to a softball game, helps lead the offense as starting quarterback. Nicole Perez, a Long Beach soccer player, has ignited the defense with two interceptions for touchdowns early in her flag football career.
Sophomore running back Rylee Roberts has also made strides in her first year with flag football, rushing for over 100 yards in the team’s first three games. She also shines on defense as a middle linebacker and leads the team in flag grabs.
“It has been a really fun experience,” said Roberts, who plays soccer in the fall. “It’s new to everyone and the coaches make it fun.”
The inaugural flag football season is now hitting the home stretch with the Nassau County playoffs looming. Long Beach hosts Massapequa Friday at 5 p.m. and Lynbrook visits West Hempstead this Tuesday evening.
The eventual Nassau County champion will face the winner from Suffolk for the Long Island title at the New York Jets training facility in Fordham, Park, N.J. on June 4.
“It would be insane to get to play there” said Sanzhez, a lifelong Jets fan of her motivation to reach the championship stage. “That would be amazing.”