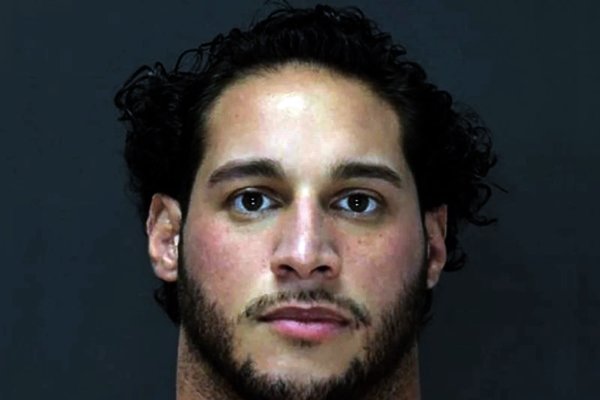 Dino Tomassetti was charged with two counts of atempted murder in the aleged shooting of his parents in their Hewlett Harbor home on Christmas Day.
Bergen County Sheriff
By Jeff Bessen

Dino Tomassetti, was charged with two counts of second-degree attempted murder in the alleged shooting of his parents, Rocco Tomassetti and Vincenza Tomassetti, in their Hewlett Harbor home on Christmas Day.

He is being held without bail. His next court date is Jan. 5. Marco La Racca, of Orange, New Jersey is representing him. Police confirmed what neighbors had told the Herald on that Saturday that the argument between Dino and his parents was over the custody of his nearly 2-year-old son. It is reported that the child is with the mother, Klarisa Perez,  who also witnessed the shooting. Orders of protection were issued against Tomassetti for Perez and the, who were not injured.

“He wanted to take  the 1-year-old away from his parents and the natural mother,” Nassau County Police Commissioner Patrick Ryder said during a Dec. 29 news conference.

Tomassetti, 29, was arraigned at First District Court in Hempstead on Dec. 29 after being extradited from New Jersey, where he led police after fleeing the Five Towns in a white 2017 Cadillac Escalade following the alleged shooting. He was caught in Mahwah on Dec. 25 and was held in the Bergen County jail.

"It's too early for me to comment," La Racca said, regarding the defense of his client.

Police said they received a call about the shooting at 10:09 a.m. on Dec. 25, and the responding officers found two people with gunshot wounds at 1060 Seawane Drive. “The defendant produced a .22 caliber pistol, he shot the mother, Vincenza Tomassetti, age 64, in the head near the right temple, and then shot the father, Rocco Tomassetti, age 65, in the back and left wrist,” Ryder said. “He struck his father then in the head numerous times with the gun after he ran out of bullets.”

Both were conscious and rushed by county police ambulance to a local hospital. They both underwent surgery and were discharged from the hospital earlier this week. Rocco owns the Brooklyn-based concrete supplier, Empire Transit Mix, and Vincenza is the owner of Starz on Broadway, a dance studio in Lynbrook.

Dino, of  Maspeth Avenue, Brooklyn, was a personal trainer at a Retro Fitness in Queens. The Hewlett High School graduate attended Molloy College from 2011 to 2012 and Hofstra University from 2012 to 2015, and was a catcher on the baseball team.