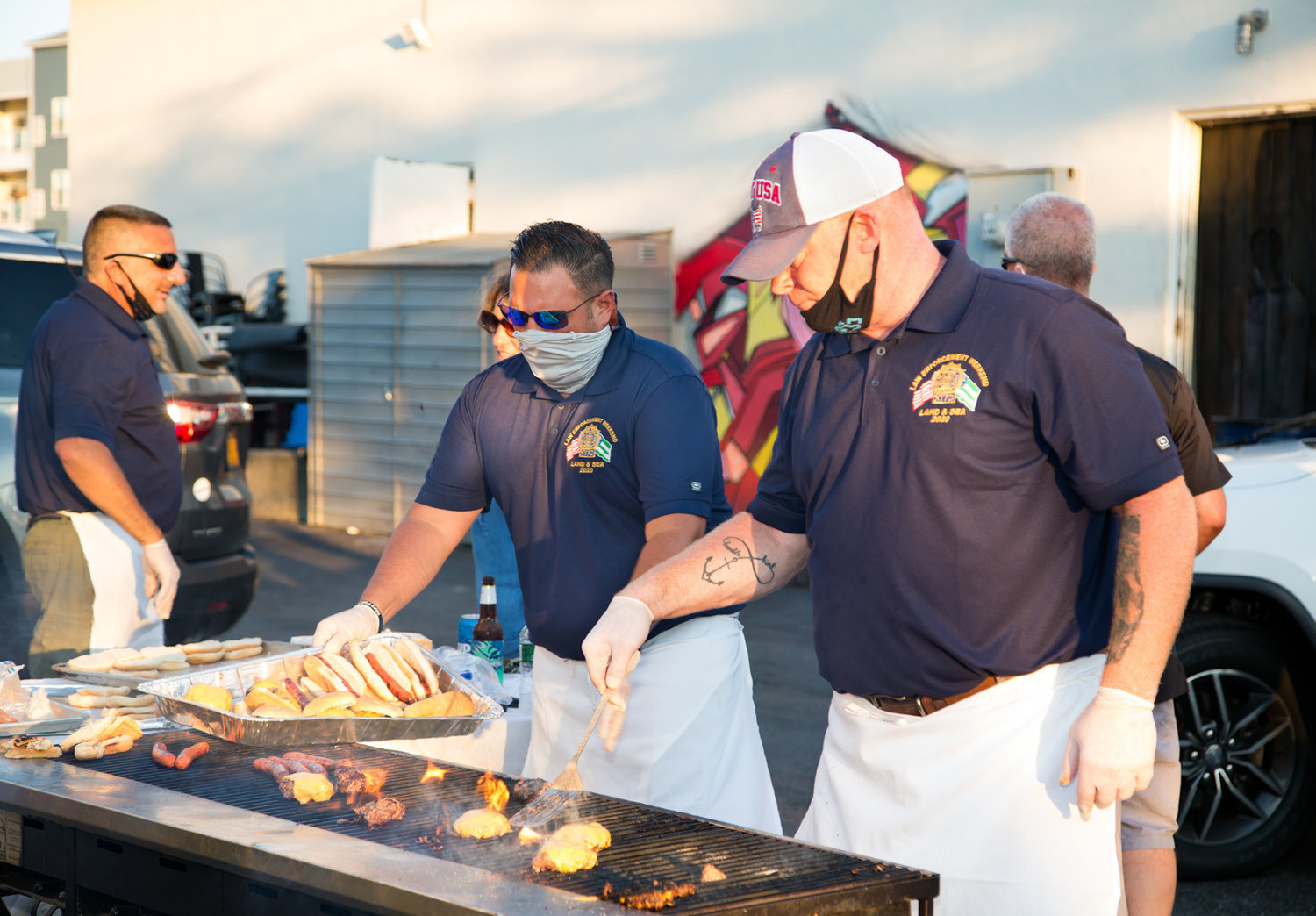 Tim O’Hagan said he was excited to offer outdoor dining again to patrons this spring and summer. Above, O’Hagan, right, cooking under the sun alongside Hempstead Town Councilman Anthony D’Esposito.
Courtesy Town of Hempstead
By Mike Smollins

With the weather warming and Covid-19 restrictions loosening, restaurant owners in Oceanside and Island Park said they are excited about the return of outdoor dining, but have had trouble staffing their businesses.

“No one wants to work,” said Tim O’Hagan, the owner of EGP Oceanside and EGP Land & Sea in Island Park. “They’re getting free money to stay at home and work no hours, so what’s the benefit for anybody to come to work? Until that changes, this industry is in big trouble. It’s a nightmare.”

O’Hagan opened his Oceandide business, on Long Beach Road, in 2014, and then the Island Park eatery, on Pettit Place, on Memorial Day 2019. He said the pandemic created many hardships for his business, but noted that it was a bit easier on him to pitch in amid a dearth of staffing because he has a background in food preparation, and his wife and children have helped him overcome the personnel shortage.

When the pandemic took off in March 2020, O’Hagan had to switch to pick-up only. As the economy slowly reopened, he decided to shift all of his operations to the Island Park restaurant, which included forwarding calls from the Oceanside eatery. He eventually opened both restaurants again, and said he was hopeful that outdoor dining would help bring in more patrons. He said that even with restrictions in place and capacity limits, he had a better winter than he thought he would, and he was eager to capitalize on the momentum this summer. O’Hagan added that he hoped for a business boost now that he can begin catering events again.

“The pandemic was one of the scariest things we had to deal with,” he said. “We’re all in it together. Whether you’re a restaurant owner, in the finance industry or retail, it was the same for everybody.”

O’Hagan said he will have about 15 tables outside in Island Park, and added that he just remodeled the Oceanside restaurant’s outdoor area, which now has up to 30 tables. They include at a patio lounge, an outdoor bar and seating by a flower garden.

With guidelines on mask restrictions loosening, O’Hagan said, patrons will not be asked to wear face coverings while seated outside; however, inside they must unless they can prove they are vaccinated. He said the current guidelines are confusing to many customers and hard to enforce.

“They put us in a tough spot,” he said. “We’re doing the best we can, but it’s definitely controversial.”

Much like O’Hagan, business owner Craig Gelston has had trouble staffing his restaurant, Jessie’s on the Water, at 92 New St. in Oceanside.

“That’s the hardest thing at this point,” he said of staffing, adding that he had six employees when he reopened on May 19, “and there’s a shortage on certain types of food.”

Gelston said his business specializes in different seafood from around the world, but not all of it is readily available in a post-pandemic world. He noted that at the height of the pandemic, he had to cut his entire staff, and only 3 percent returned. Some of his chefs found work in Florida and Texas and decided not to come back. He said that because of a lack of staffing, he has had to close Sundays, Mondays and Tuesdays, but hopes to return to a full-week schedule.

“It’s gotten to the point where if I’m at the grocery store and the cash-out person has a great personality, I ask, ‘Have you served before?’” he said with a laugh. “You can train anybody to do anything, but you can’t train personality.”

Gelston said he likes to visit tables to ensure that everyone enjoys their food and their time. He also said that despite the issues with staffing, the return of outdoor dining is “going to be fantastic.” The restaurant has a large deck on the water and four boat slips, where people on kayaks often come up to order drinks. The outdoor area can fit up to 100 people, and though many in the community remain hesitant to dine at a restaurant, Gelston said he hoped they would come enjoy the outdoor area this spring and summer.

Like O’Hagan, Gelston said that his business is following updated mask guidelines, and people who are fully vaccinated and dining inside or those eating outside will not be required to wear facial coverings.

Both business owners said they were excited about what a semi-normal summer could bring after the hardships of 2020.

“It’s going to be a great summer for business owners, and I think it’s going to be well deserved,” O’Hagan said. “I think our guests are really itching to get out and have a little sense of normalcy.”