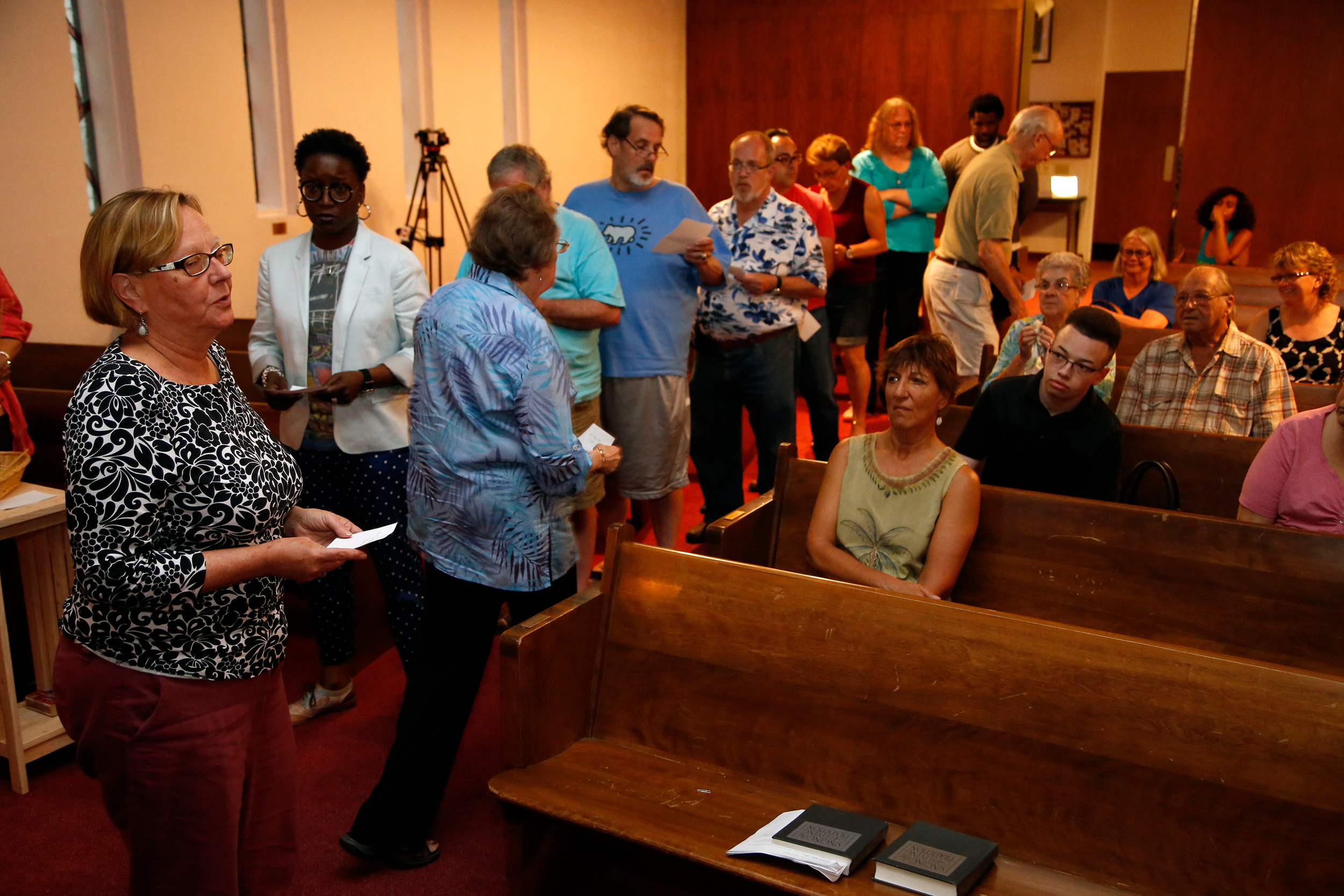 Diane Hawkins was among many congregation members who read the names and ages of the victims during a candlelight vigil in remembrance of the Pulse Nightclub victims.
Sue Greico/Herald Leader 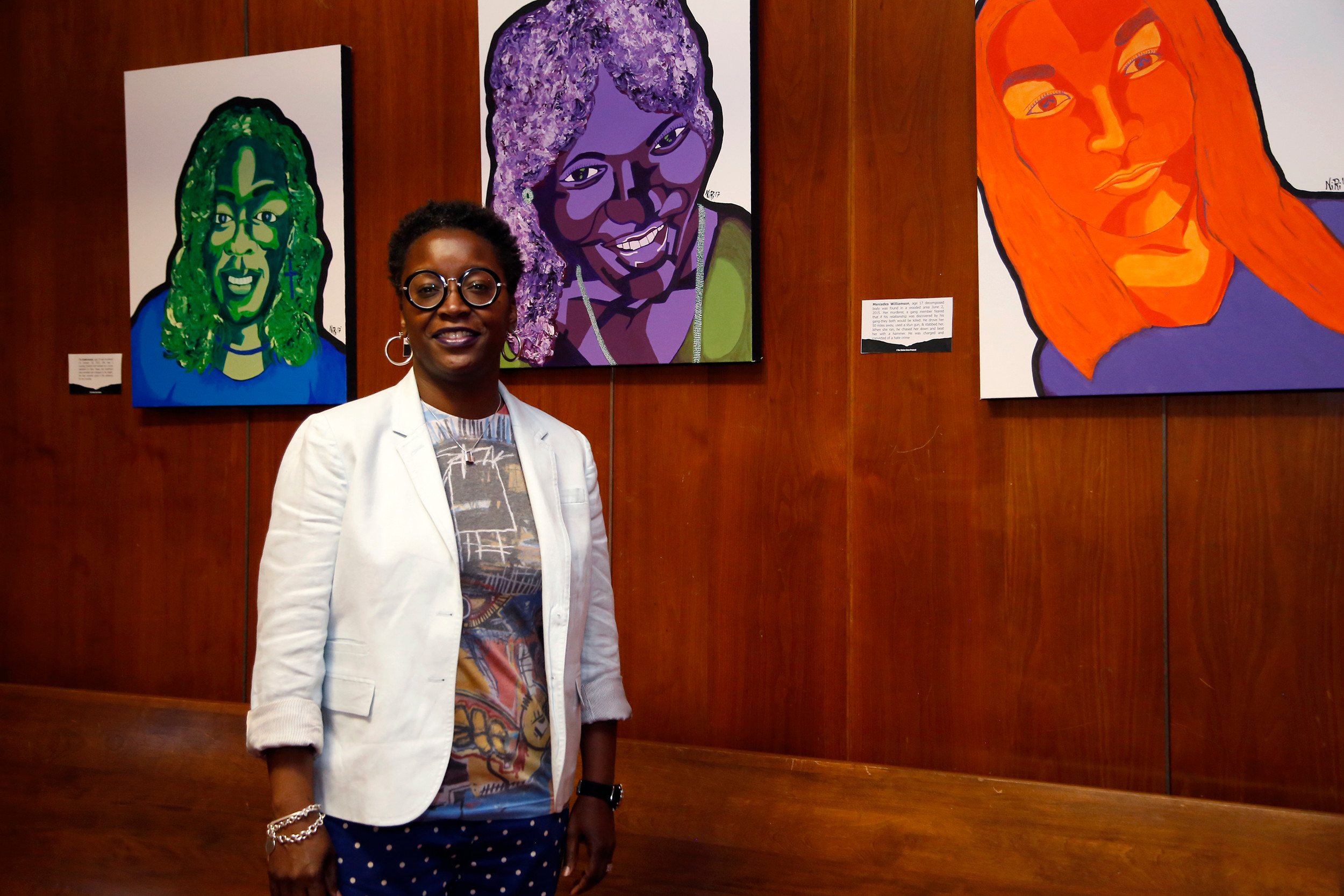 Artist and educator Dr. Nichelle Rivers presented artwork that depicted transgender persons who were killed in acts of violence. The artwork is known as a series called “The Stolen Lives Project”.
Sue Greico/Herald Leader 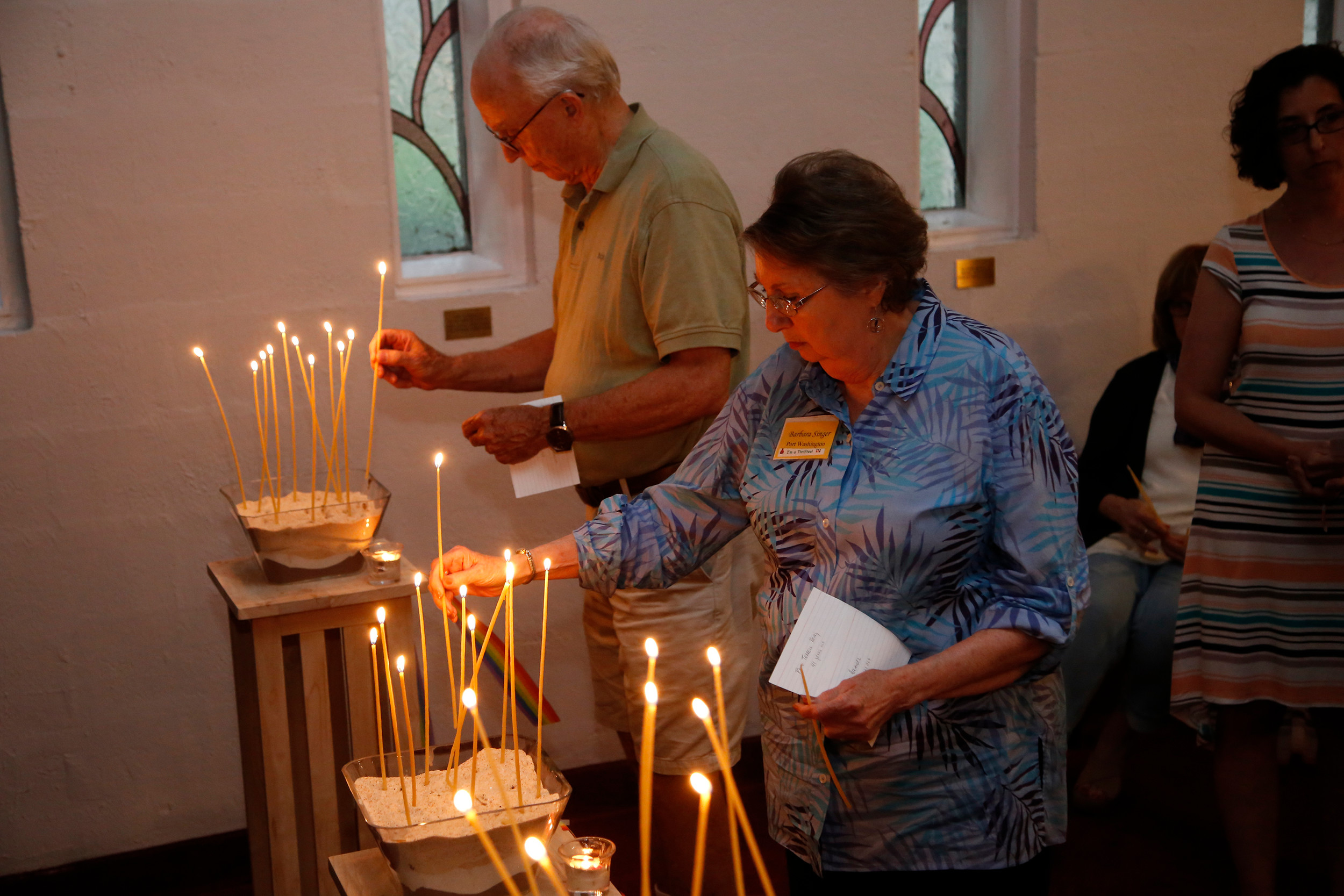 Barbara Singer and Jim Hawkins lit candles in memory for the 49 victims of the Orlando shooting on June 12, 2016. A memorial was held at South Nassau Unitarian Universalist Church in Freeport this June. 12.
Sue Greico/Herald Leader
Previous Next
Julie Loney

During the early morning hours on June 12, 2016, the Orlando Regional Medical Center took in 36 patients in 36 minutes, in an event that would later be known as the worst mass shooting in the history of the United States. Forty-nine people were killed and 58 injured in the deadly shooting at the Pulse nightclub in Orlando, Fla., a tragedy that left holes in the hearts of people throughout the world.

Across the country, Lesbian, Gay, Bisexual and Transgender communities celebrate Pride Month in June with parades and events, but now they also mark the month with memorials to Orlando.

More than a thousand miles away from Orlando, the South Nassau Unitarian Universalist Church, in Freeport was filled with pews of more than 40 people who sat silently, reflecting on the tragic events that shook them a year ago.

The walls of the Freeport church lobby were covered with papers containing LGBT community statistics, ranging from number of suicides per year per LGBT person, to the average costs of common surgical procedures among transgender individuals.

The SNUUC held a vigil service to remember the Orlando victims through an art exhibit and a documentary, from the Institute for Healthcare Improvement’s 28th annual National Forum Keynote.

The idea behind the documentary was not to highlight the events surrounding the Orlando shooting, but to shed light on the medical personnel’s experience on that unprecedented night. The president and co-founder, Ilene Corina, of PCPSEA or also known locally as the Pulse Center for Patient Safety Education and Advocacy, spoke at the event, saying that through the documentary, an entire perspective and impact of the tragedy was exhibited.

After attending a medical conference in 2016 after the nightclub massacre, Corina decided to share the message with how the medical staff’s quick thinking saved the lives of more than 40 people the night of the shooting. Through this event, Corina’s objective was to raise awareness of importance of having a plan in case a tragedy similar to Orlando’s were ever to happen in Freeport or the greater Long Island community.

“I realized this was a problem all over, not only in Florida, but that hospitals everywhere need to ask themselves, ‘Are we ready to handle something like this’?” Corina said.

The keynote speech video included the story of five members of the Level One Trauma Center at Orlando Health that worked the night of the event, and the many draining nights that followed. Corina’s concerns for patient safety and support appeared evident in the preparation of this event, adding that Freeport is known as the hub for medical professionals across the South Shore, who needed to understand how the depth of this night affected everyone.

“[This conference] reminded me that patient safety is not only about what goes wrong in health care, but what goes right,” Corina said. “We are reminded tonight that most people in health care overlook our differences, and care for us no matter who we are, regardless of nationality, gender, sexual preference or religion,” she said.

Another aspect of the vigil included the artistic perspective of Dr. Nichelle Rivers, an educator dedicated to representing the LGBT community through art in an exhibit titled, “The Stolen Lives Project.” Through her paintings, she showcased transgender victims of violent crimes. Next to each painting was a description of the individuals, including their ages and how they were killed —highlighting the lives and severity of violence against transgender individuals today.

“These people are mothers, daughters, sons, aunts, uncles, they are someone’s child,” Rivers said, encouraging attendees to read the names of the victims aloud as they viewed her artwork. “We have to start humanizing them, because they are just like us, no different.”

A slow beat of a drum filled the room as guests made a line near the stage. Congregation members each took a turn solemnly repeating the names and ages of the 49 victims killed on the night of the attack. They held lit candles in their hands.

Following the vigil, there was opportunity for discussion to reflect on both the film and the evening. Community members expressed their sorrows. PCPSEA intern Chantell Davidson said she was pleased to see Freeporters come together for this event.

“It’s nice to know that a lot of people were moved and that they were touched by the film and the vigil,” Davidson said. “Everyone was able to get more information on the Orlando events, and from this they can spread more love and be more aware of what is going locally.”