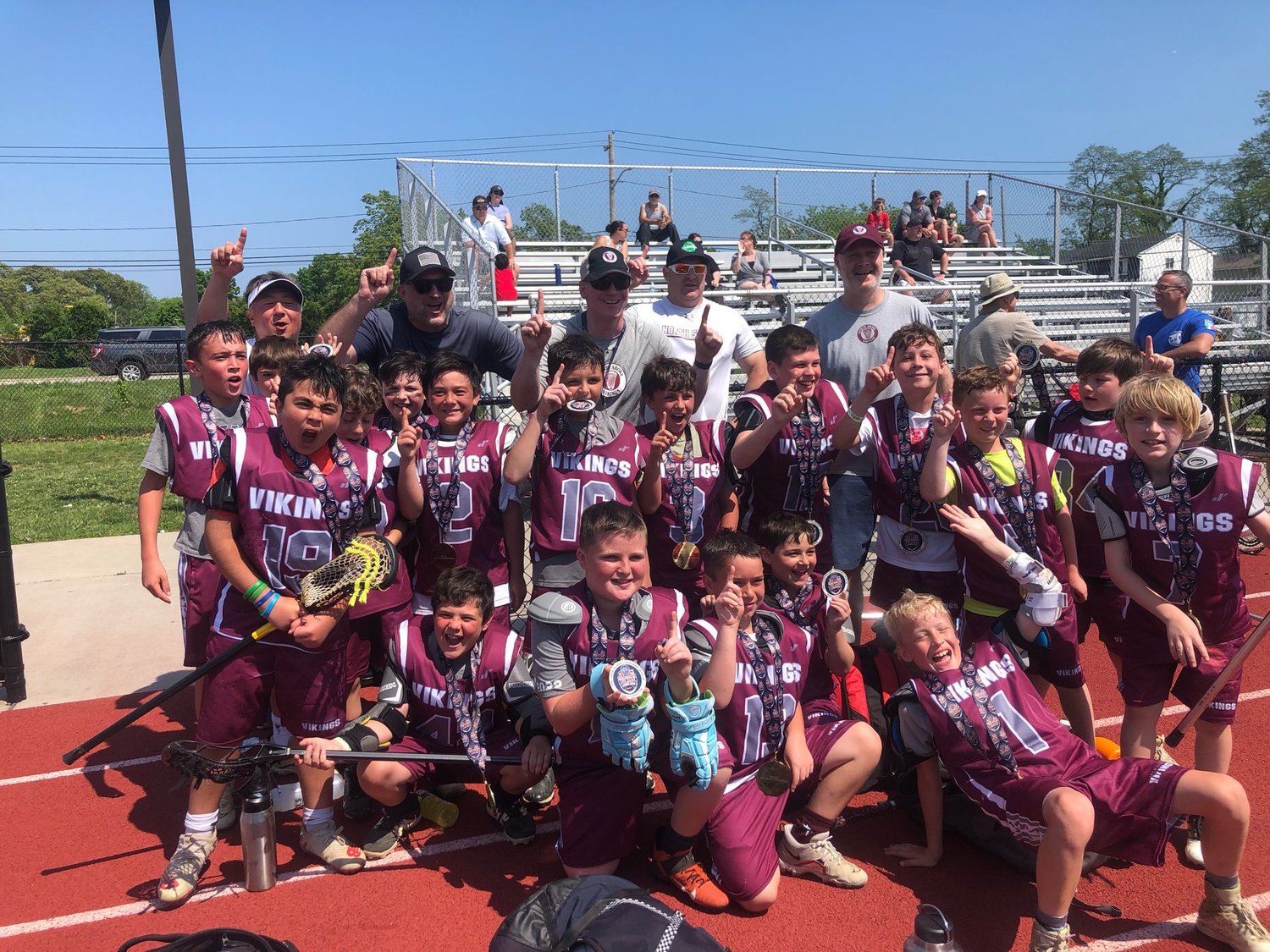 The PAL League North Shore Vikings named themselves after the high school team, and proudly chant “Vikings on three” after every game.
Courtesy Mike Yoo
By Will Sheeline

Fourth graders from the North Shore Vikings team in the Nassau/Suffolk Police Athletic League’s Long Island Lacrosse League won the championship for their age group at the end of season tournament on May 22. This victory is doubly important, as this was the first time the championship was between teams from both counties.
The PAL Lacrosse League is the largest on Long Island and help organize games and tournaments for tens of thousands of young athletes around the island every weekend. Leagues are organized by age group, with athletes being drawn from a variety of villages and towns within their school district.
The 20 players on the North Shore fourth grade team have been together since pre-K, and most have been playing together for nearly six years. In that time, the players, families, and coaches have gotten to know each other very well, and have formed a tight-knit and supportive community.
“I think ... having a special group of families, that’s huge, and the chemistry is definitely a key factor,” assistant coach Palin Archer, whose son Robert plays on the team, said in an interview. “We’ve been doing this since they were four or five years old, so the parents have all become friends, and it’s just great to see.”
Along with Archer, head coach Mike Yoo and fellow assistant coaches Evan Clancy, Brian Ryniker and Richard Regan have been shaping the team since many of the players first picked up a stick. According to Yoo, they have been very lucky to have such a phenomenal group of young competitors.


“They’re a fun team to coach, it’s an exceptional team with great kids, dedicated, gritty players,” Yoo said after the championship. “They’re a really tight group, and they care about each other and love to compete.”
The path to the championship was not without its challenges. The Vikings, named in honor of their school district’s mascot, played seven games against a variety of Long Island teams in the regular season, winning all but one.
Their one loss, the last game of the regular season, was a nail-biting 6-8 game against West Islip, another undefeated team at the time. Since the Vikings were still one of the top teams despite the loss, they made it to the PAL Lacrosse League Championship on May 22.
They first had to face off against Massapequa, another undefeated team, with six wins and one tie in the season. The Vikings managed to stand firm, however, and won a solid 7-5 victory over their opponents.
That left them in a rematch against the only undefeated team left in the league, West Islip. In a grueling battle of the titans, the Vikings managed to upset their opponents and won by a decisive margin of 9-6.
Defensemen and long stick face-off player Dastan Balooch explained that winning the championship was a great feeling, but also that the players never forgot that sportsmanship was just as important.
“It felt amazing honestly, and it was really a team effort,” Balooch said. “Also, after the game, Cody, number 96 from West Islip who I face off against — a great kid — he came over and congratulated me, which was really great.”
This won’t be the last chance the Vikings have to play against West Islip. The league continues until sixth grade, and Yoo and the other coaches say they plan to stick with the players until the end.
“The kids are stuck with us,” Yoo said. “You know, this is a very close group, and while they’re super competitive on the field, off the field they’re really good friends. I think the five coaches and the players on the team are invested, and we want to see this through.”
Report an inappropriate comment

Two RVC natives behind 'The Captain'