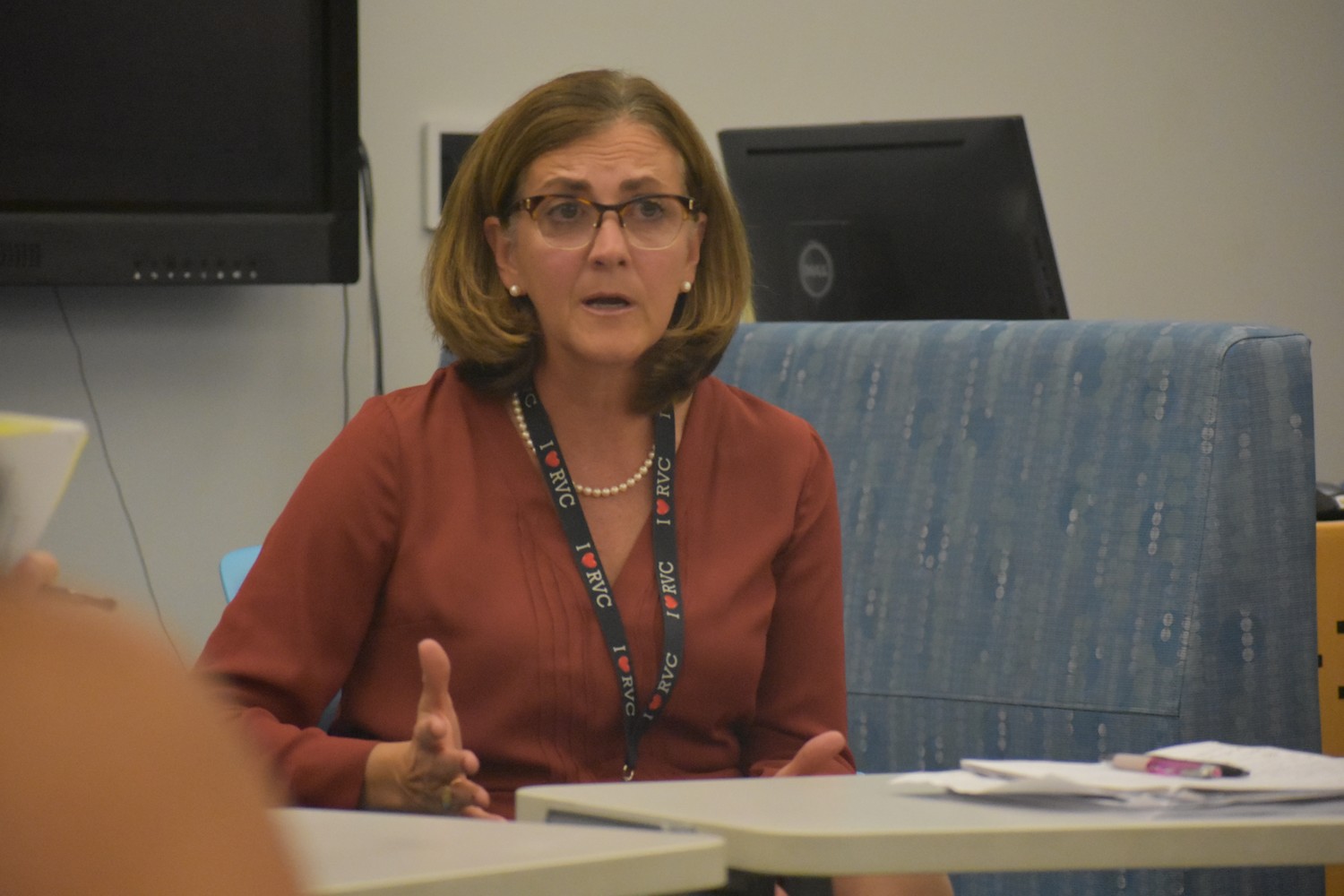 Dr. Noreen Leahy, assistant superintendent of special education and pupil personnel services, discussed what the district has done to address concerns from parents of children with learning disabilities at a meeting on Oct. 4.
Ben Strack/Herald
By Ben Strack

Rockville Centre school officials said they have examined data and reviewed the district’s special education programming after hearing the concerns of parents of children with special needs who have urged the district to tweak the district’s inclusion model. But parents are not satisfied with the changes.

The meeting followed three forums, held by Rockville Centre’s Special Education Partners, or SEP, in April and May that dealt with issues including support services for students with disabilities, the district’s International Baccalaureate, or I.B., courses, the pathways to graduation for those with special needs and the overall difficulty of certain classes.

The district outlined measures taken in response to the discussions earlier this year. This summer, for example, a writing project was conducted to determine units in English classes that struggling learners are having the most trouble with. Teachers then created strategies and lessons to address those difficulties. Leahy also pointed out a new reading program implemented at the middle school and elementary schools, and added that nine teachers this year would be getting certified in the Wilson Reading System, designed for students who are reading and spelling below their grade level.

But parents, many of who do not agree with the district’s universal enrollment in I.B. English and history classes, for example, used the Oct. 4 meeting to echo concerns made at the previous forums. Some called those classes, taken in 11th grade, similar to Advanced Placement classes, which they said students with certain disabilities should not have to struggle through.

“We just want you to have a common-sense approach to this,” Maryanne Pedersen, SEP’s representative for South Side High School, said to Leahy. “I’m frustrated because you didn’t listen.”

The Rockville Centre School District is one of 10 districts on Long Island to offer I.B. curriculum, Leahy said. Though it does not force students into the I.B. program, it is the only district on the island that requires students to take I.B. English and history.

“Sometimes following the crowd leads to mediocrity,” Leahy said, noting that a rigorous curriculum is the best way to prepare students for college, and life.

“Across the board there will be struggle,” she added, but pointed out that a large majority of South Side’s students with disabilities welcome the challenge and are successful. Last year, 94 percent of students in that category graduated, compared to the state average of 54 percent. South Side High School was named a National Blue Ribbon School last month, which is granted, in part, to schools that close achievement gaps among different groups, like minorities and special education students.

But “at what cost?” some parents asked.

Elizabeth Mullen said at the meeting that her child, who is a junior, struggles in classes she doesn’t belong in, and misses other classes when using her extended time for tests. “All kids should get through with some sort of joy in high school,” Mullen told the administrators. “…You can feel my pain.”

Karen Burgie, a SEP representative, said that some children need another option. “Our kids are miserable,” she said. “They cannot do this.”

Leahy said the district would do a better job of communicating information about review classes and tutoring and noted that there five sections of support for I.B. English this year. She has also emphasized throughout the meetings with SEP that special education programming, services and support are determined on a case-by-case basis for individual students and that Rockville Centre’s programs are designed for that in mind.

She said she does not want this discourse to be viewed as a fight or struggle, and noted that SEP leadership has been very dedicated to these discussions. “They’re keeping us very honest,” Leahy said.