Scout Maselli builds a new home for ospreys in Bayville 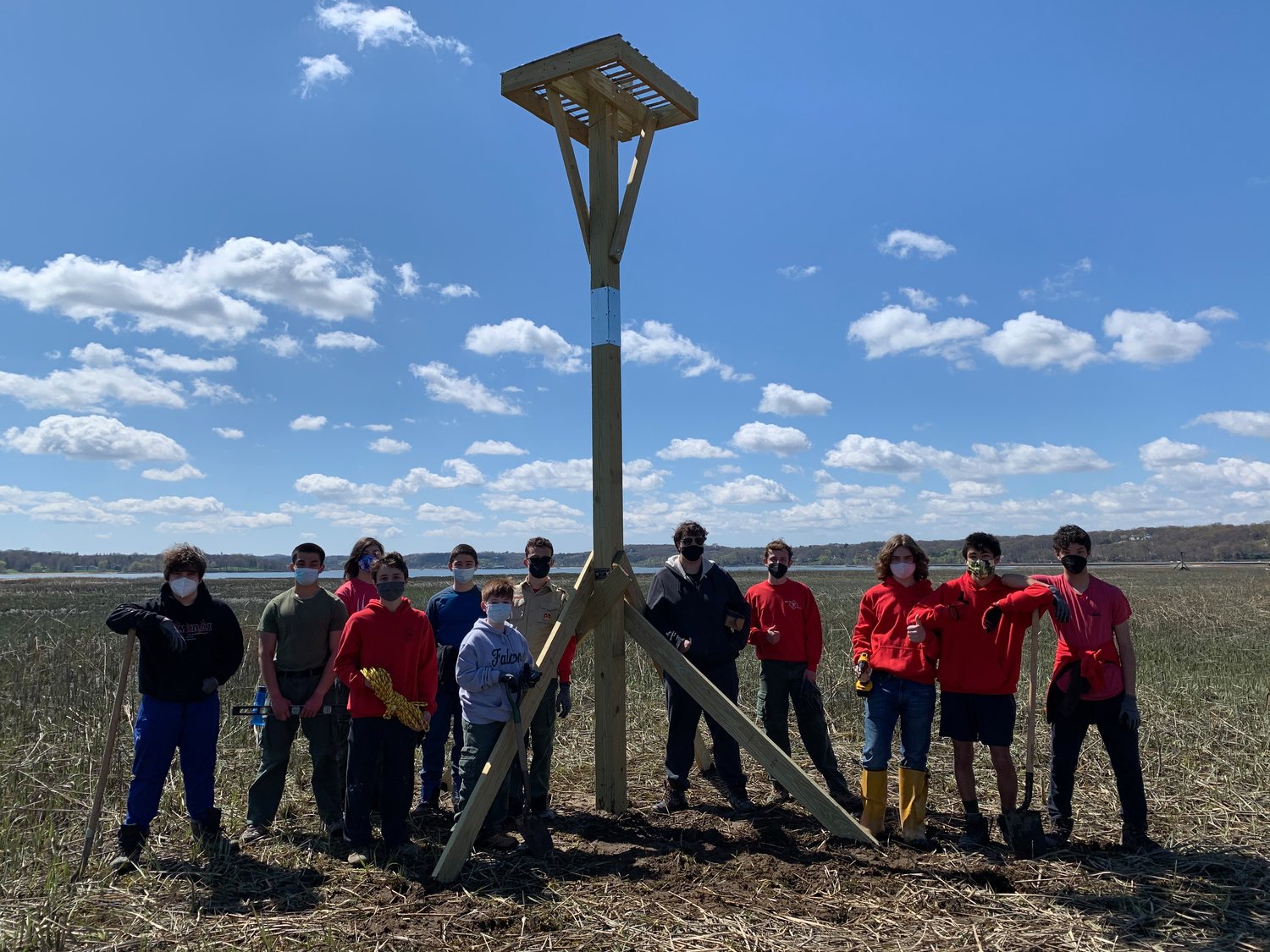 Ryan Maselli, fifth from left, a Life Scout in BSA Troop 176 in Bayville, built an osprey nest for his Eagle Scout project with the help of other scouts and the North Shore Audubon Society.
Courtesy Maselli family 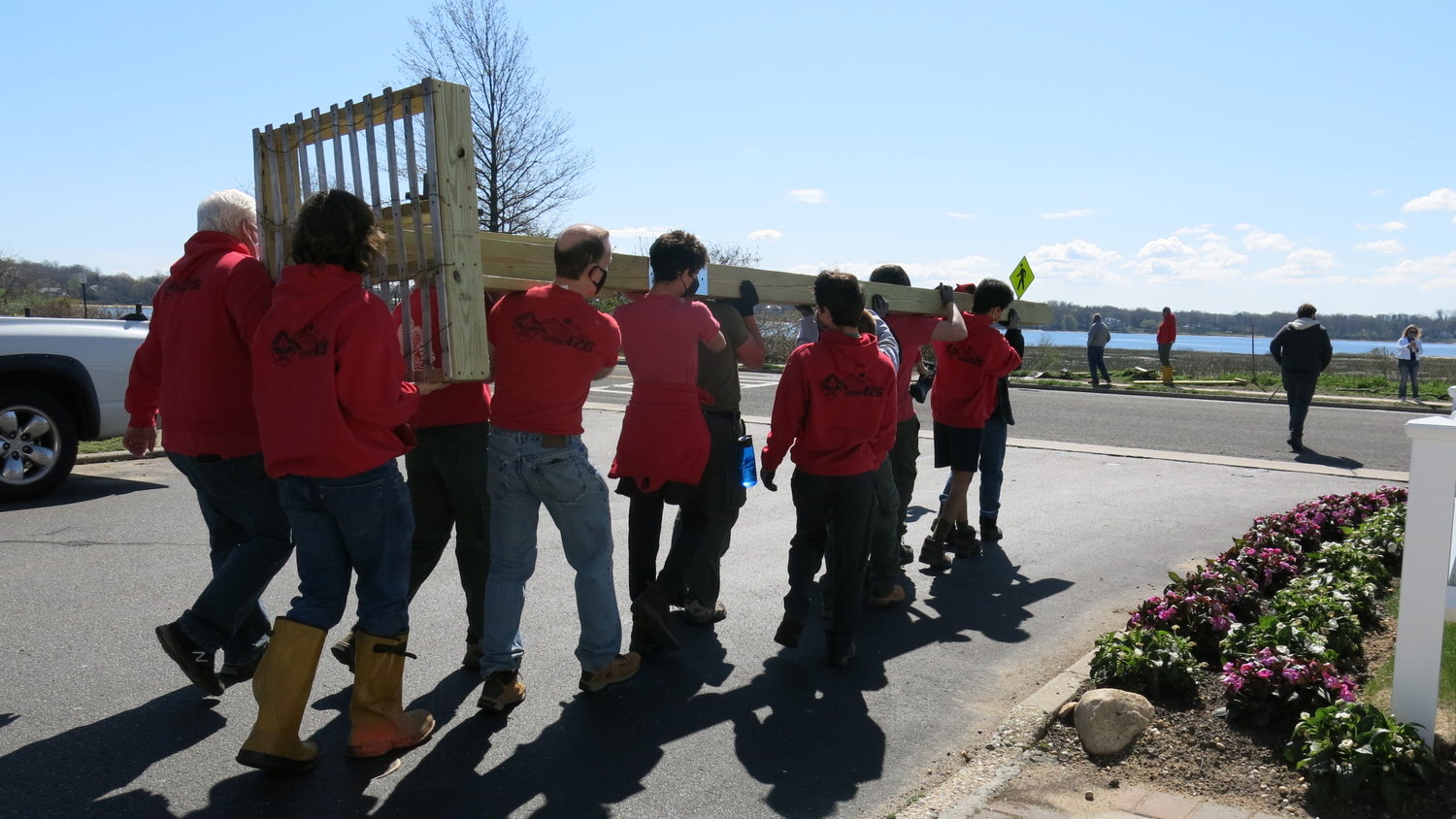 The scouts lugged the nest to where it would be placed, 100 yards from West Shore Road in a marsh.
Laura Lane/Herald
Previous Next
By Laura Lane

An osprey couple recently moved to a new home in the marsh next to West Harbor Beach. The surroundings are ideal — a 360 degree view of the Long Island Sound where dinner is a stone’s throw away. They arrived the day after the osprey nest platform, atop a 20 foot pole, was driven roughly 4 feet into the marsh in Bayville. The couple immediately began crafting their nest and a day later, the male was seen flying over their new home defending it.

The raptors have Ryan Maselli to thank for the new digs. The Life Scout in BSA Troop 176 in Bayville built the nest for his Eagle Scout project with the assistance of the North Shore Audubon Society.

“Ever since I joined the scouts when I was 13, I wanted to be an Eagle Scout,” Maselli, 18, said. “It’s hard to do it and only 2 percent of scouts make it. Installing this platform feels like a big accomplishment.”

Jim Jones, a member of the North Shore Audubon Society, was more than happy to help Maselli build the nest platform. He is known as somewhat of an expert in Bayville on ospreys. “If you hear squaking it’s a fight for the nest between parents and teenage ospreys,” said Jones with a chuckle. “The osprey give us gifts, give me gifts, that can never be repaid.”

In completing his project, Maselli learned about building and also became expert in doing research. “They were seriously endangered by the effects of pesticides in the mid-20th century, but since DDT and similar pesticides were outlawed in 1972, ospreys have made a comeback in many parts of North America,” he wrote in his binder of information, which is required of Eagle Scout candidates. “The osprey is protected by the Migratory Bird Treaty Act. In N.Y., the osprey is listed as a ‘species of special concern.’”

Maselli decided to build the nest to benefit the osprey but also to provide his community with an opportunity to appreciate and observe them, he said. Several neighbors on Alan Road, which is across the street from the marsh where the nest was planted, gathered to watch the scouts on April 18. Some said they were happy that the nest would be nearby so they could enjoy seeing the ospreys.

There are now nine osprey nests in Bayville. Maselli’s is ideal because it is safe, away from electrical wires and other dangers.

“It is 90 to 100 yards from West Shore Road, far enough away so they won’t have to care about traffic and dogs,” Jones said. “I suggested this area because it’s the perfect spot because everyone will be able to drive by and see it.”

Maselli chose to work with the North Shore Audubon Society because its mission is to conserve natural resources and educate the community, he said.

He had a few steps to accomplish before actually building the nest and the society helped. Maselli had to get approval from the Town of Oyster Bay from its Environmental Review Board, which he did alone. Once he received a green light Jones touched base with the Department of Environmental Conservation to get their approval.

Everything seemed to be going well, but then the effects of Covid-19 became evident. The wood wasn’t available and the prices of the materials were more expensive than expected by roughly $500. This was all due to the pandemic, Maselli was told.

He overcame the hurdles by fundraising. Because of the pandemic, Eagle Scout candidates are permitted to raise money on GoFundMe. Ordinarily they host activities that involve the community like car washes and bake sales.

Through GoFundMe Maselli raised $1,000 to cover the costs of the building materials, tools and other supplies. On his donation page he promised that if any money raised for his project was not used it would go back to the North Shore Audubon Society.

Once he had everything he needed Maselli checked the tide tables, finding April 18 to be optimal because the tide would be at its lowest. Then he asked several scouts to help him build the osprey nest platform and install it.

John Cote, scoutmaster for the troop described Maselli as “a great kid” who puts much effort into anything he does.

“This is something different that the entire town will benefit from,” Cote said. “Usually, Eagle Scout candidates do benches for a park or church and we do a lot of work at Shu Swamp. I think this project will start a nice relationship between our troop and Jim’s organization.”

Maselli’s mother, Jennifer, said she is proud of her son. Ryan, who is autistic, does well academically, among the top 15 students in his class. And he will receive an International Baccalaureate Diploma when he graduates. “Socially it is hard for him,” Jennifer said. “But Ryan continues to defy the odds. He has a community with the Boy Scouts and he has grown with them.”

Ryan’s father, Chris, said the Eagle Scout project has been a valuable learning opportunity for his son. “He has been able to pick up leadership skills,” he said,  “and give back to the natural and human community.”

'Mitten Trees' provide help for those in need