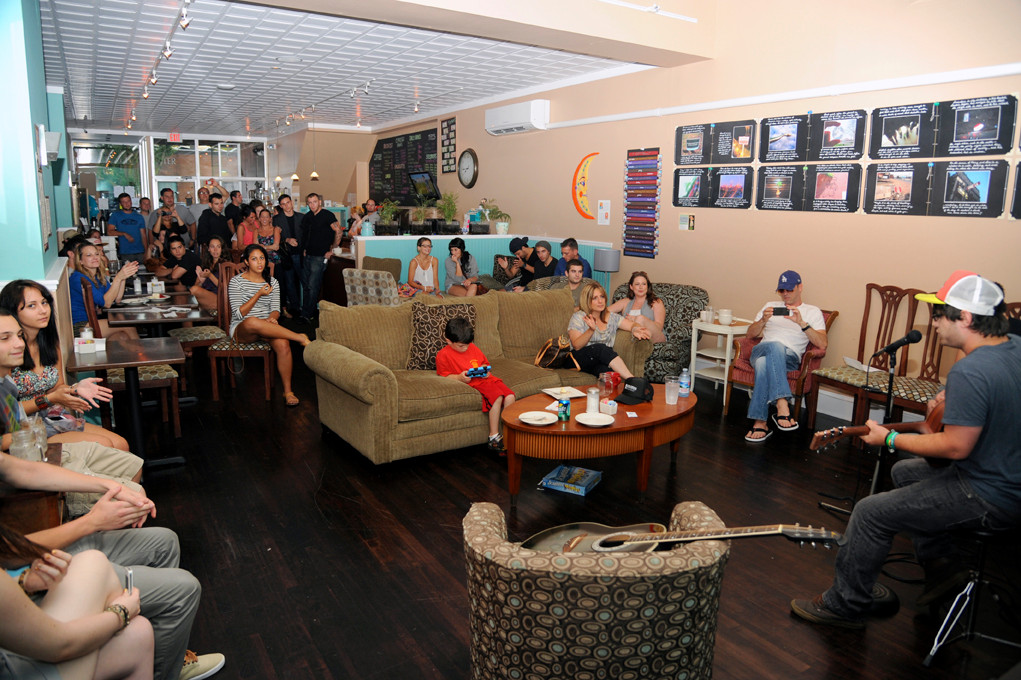 Musician Austin Schoeffel performs during a recent show at Sip This in Valley Stream.
Donovan Berthoud/Herald 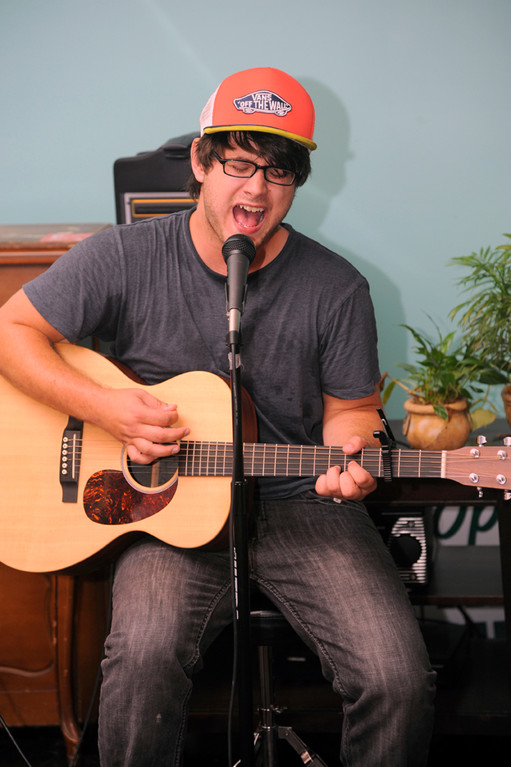 Musician Austin Schoeffel performs during a recent show at Sip This in Valley Stream.
Donovan Berthoud/Herald
Previous Next
By Laura Cerrone

Before he is comfortably singing in front of the packed crowd at North Village Tavern, Austin Schoeffel is pacing back and forth as he checks that his electric guitar is in tune. He tells the crowd with a slight pang of nervousness how he almost had to cancel the show.

The night before, the Valley Stream native called up long-time friend Paul Caraccio to fill in as drummer for the set. Schoeffel’s original drummer had bailed on him. Caraccio showed up at Schoeffel’s house at 9 a.m. to learn the set list.

Hartmann, who is also a friend of Schoeffel’s, participated in North Village Tavern’s first open-mic night, which featured Schoeffel as the main act.

Schoeffel has been performing his own music for a few months now, recently playing a show at Sip This, a local Valley Stream coffee house. The 21-year-old singer and songwriter even has his own manager, his best friend, Rocco Tedesco.

Tedesco has known for years how talented his best friend is and wants the world to know that. “I’ve seen him pick up an instrument and play it like he’s played for five years,” Tedesco said.

In fact, Tedesco says he is so confident in Schoeffel’s abilities that he quit his job as a mortgage banker to manage Schoeffel. Devoting his energy to the cause, Tedesco has even started his own management company, All-Rising Stars Entertainment.

Schoeffel was meant to play about seven songs at his Aug. 7 show, but on the third song, his acoustic guitar string snapped. He started off his set with a song called “My Ex Stacy,” and continued with a cover of “Seven Nation Army” by the White Stripes. His third song was an original called “Sunshine,” and because he could only use his black, red and white electric guitar, Schoeffel covered The Beatles “Obladi Oblada.”

Schoeffel’s mother bought him his first guitar when he was 10. Despite never taking guitar lessons, it was something that came natural to him. “Guitar was something I practiced every day,” Schoeffel said.

It was in 10th grade at Valley Stream South High School when Schoeffel realized he wanted to be a musician. For him, it just clicked. “I did not want to wake up in the a.m., put on a suit and tie, and go to work everyday like everyone else,” he said.

As Schoeffel begins to live out his dream, he has plenty of help along the way, even from complete strangers.

Linda Keanna of Hewlett, a Five Towns recreational supervisor by day, and the MC of karaoke night at North Village Tavern on Thursday nights, is one of those strangers. Tedesco approached Keanna in need of a favor. The equipment Schoeffel uses is not sufficient to play a loud enough set at the North Village Tavern. But Keanna’s karaoke equipment is.

Having never heard a single note from Schoeffel, she agreed to it. Keanna also served as the impromptu MC of the tavern’s first ever open-mic night.

“If someone thinks they stand a chance, I want to give them the opportunity,” Keanna said.

As soon as Schoeffel finished playing in the small Rockville Centre bar, Keanna came over to him and embraced him. She told Schoeffel to let her know when he was playing next because she definitely wanted a ticket, as long as he were to play his rendition of “Obladi Oblada.”

“He’s not trying to sound like anyone else,” Keanna said of why she became a fan of his that night.

While Keanna may be a new fan, Schoeffel has a built-in fan base with the support of his friends and family. Angelo Morana, who has been friends with Schoeffel since high school, recalls just how they met. “I remember he started making music in high school,” she said, “and I stopped him in the hallway and asked for his CD. After that we started hanging out.”

Morana was also one of the first people to hug him after his set at the Tavern. “I’m here for his support and want to be there for his success,” Morana said of his friend.

Schoeffel plans on recording a full CD and booking an East Coast tour by the end of the year. Perhaps in the future, Schoeffel will get to play on the same stages his favorite band, Third Eye Blind, has played.
Report an inappropriate comment