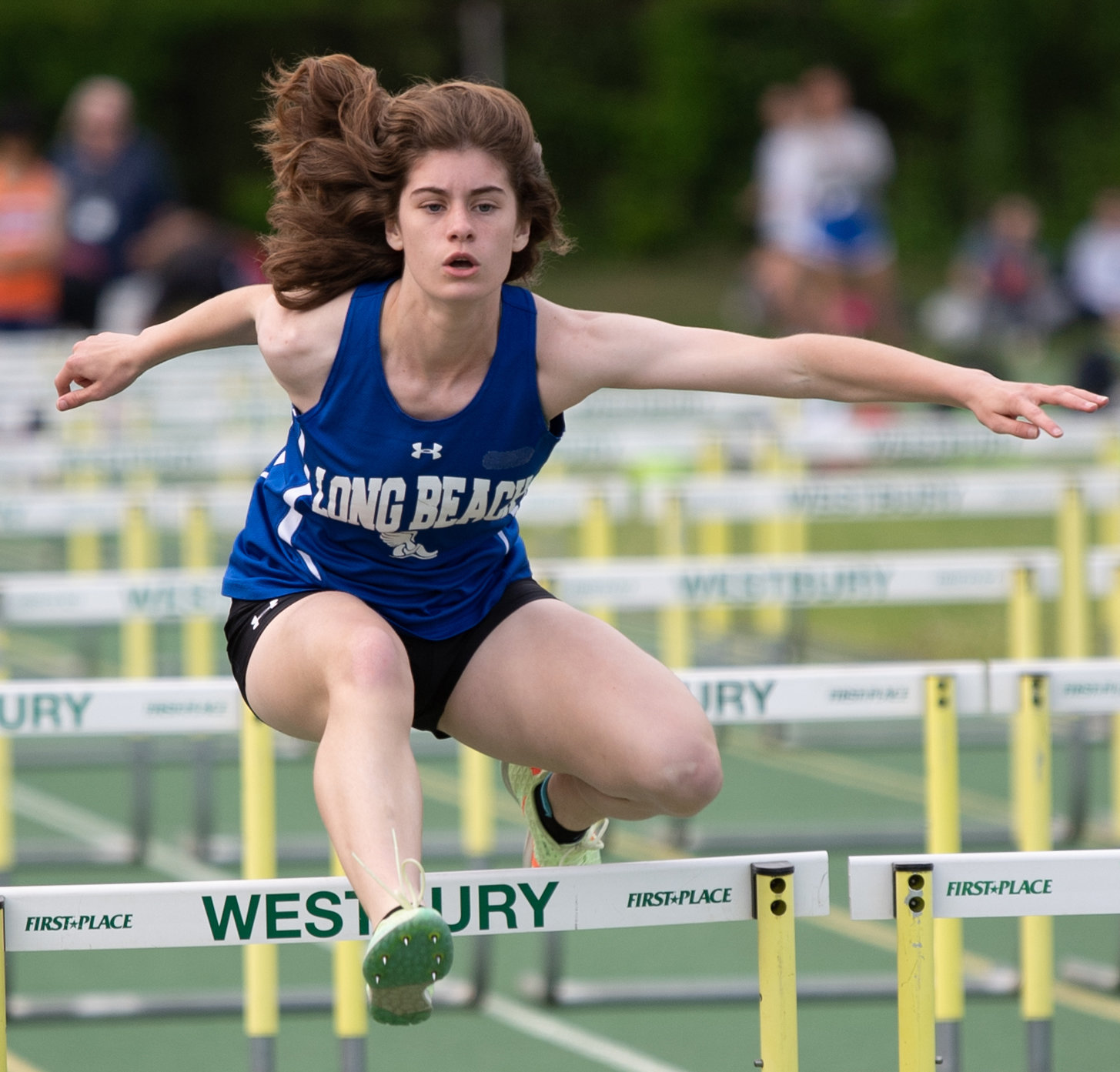 Sophomore Kayla Carney was Long Beach’s top hurdler and Division 2A runner-up in the 100 and 400 hurdle events.
Media Origin Inc./Herald
By Tony Bellissimo

Long Beach’s track and field programs completed a strong spring with a combined 20 victories and division champions for both teams.
Coach Megan Grahlfs’ girls’ squad enjoyed an 11-2 regular season and followed up with clutch performances in the Division 2-A championships led by senior Katherine Almeida (triple jump champ) and sophomore Kirsten Lilly (pole vault champ.)
“We had 11 county qualifiers and finished second in the division meet after winning it for the first time last year,” Grahlfs said. “It’s a great group of girls who are humble about their success.”
Almeida, who was also runner-up in the long jump, won the triple jump with a top leap of 31 feet, 11 inches. Lilly won the pole vault at 7-feet even and finished in a three-way tie for sixth place in the Nassau Class AAA meet at 7-6. Sophomore teammate Mikella Gray placed third in the division meet.
Sophomore Kayla Carney was the top hurdler and finished division runner-up in the 100- and 400-meter hurdles. She completed the 100 in 17.62 seconds and the 400 in 1:13.20. She also hit the board in discus, placing fifth.


The Marines enjoyed plenty of success in relays, placing second in the division meet in the 4x100 with Lilly, seniors Natalia Hakimzadeh and Sarah Munier, and junior Akya Alexander, as well as the 4x400 with Carney, seniors Almeida and Valentina Gonzales and junior Jewel Jones
Jones, a county champion in the winter (1000m), competed in this spring’s state qualifier meet in the 2000 steeplechase after placing fourth in Class AAA.
Senior Annelise Whelan was second in the division in the high jump, while seniors Jewel Jones, Samantha Addeo and freshman Gwen Serafin led the way in distance races.
On the boys’ side, senior Henry Manueles won the division shot put championship with a throw of 39-11 and nearly earned All-County honors with an impressive top heave of 44-2 ½ at the Class AAA meet.
“We had 26 underclassmen out of 40 kids and improved in the division meet by 27 points compared to last year,” said coach Greg Milone, who guided Long Beach to a 9-4 regular-season mark.
Long Beach dominated the board in throwing events at the division meet. Manueles was also fourth in the discus, behind champ Alejandro Cabrera of Herricks and Marines’ senior Ethan Gish (second, 102 feet) and junior Max Green. Gish was also fourth in the shot put, with freshman Leo Muskin fifth.
“Henry is a four-year thrower who’s come a long way under the guidance of assistant coach Dan Quinn,” Milone said.
Another reason for the boys’ team’s success this spring was the pole vault. Senior Jacob Borelli, sophomore Gregory Milone and sophomore Ryan Allan finished 2-3-4 in the division meet. Borelli followed up with a big showing in the county meet, placing fourth in Class AAA with an 11-foot clear.
Freshman Nickita Meinikov emerged in jumping events, placing second in the triple jump (38-10) and fourth in the long jump (18 feet.)
Sophomore Vincent Volpe was runner-up in the 400 hurdles (1 minute, 5.41 seconds) and just missed scoring in the county meet by finishing a solid seventh.
Long Beach’s best finish among relays was its 4x400. It was third behind MacArthur and Mepham with senior Aaron Langston and sophs Milone, Volpe and Thomas Morelli.