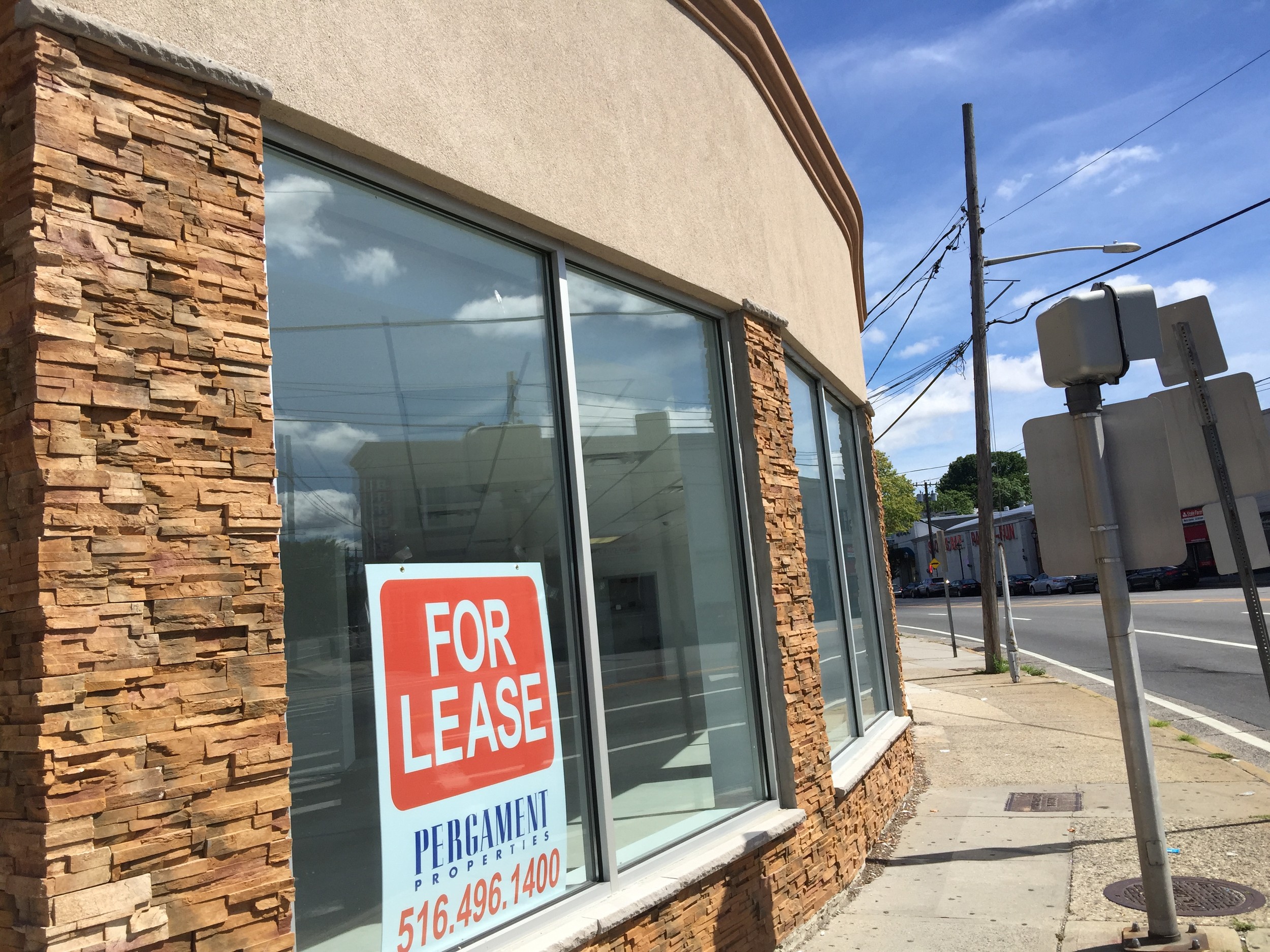 A storefront at the corner of Merrick Road and Grand Avenue is one of the many empty sites that are included in the redevelopment.
Steve Smirti/Herald
By Steve Smirti and Nakeem Grant

In April, the Town of Hempstead issued a request for proposal to developers to create a plan to revitalize Baldwin’s five-acre downtown parcel at the corner of Grand Avenue and Merrick Road. With a number of empty storefronts, the main drag along Grand has seen a steep decline in local shopping and dining for the better part of two decades. Developing the downtown area would mean new stores and restaurants, which would increase the hamlet’s revenue.

Local officials and community leaders are now throwing their support behind the RFP and urging community members to become involved in the process, which would see recreation space coupled with commercial and residential properties at the location.

The first proposals for developing Grand Avenue were made in 2006, when the Town of Hempstead’s Department of Planning and Economic Development issued an RFP. A development team was selected the following year, but plans fell through when the real estate market declined precipitously during the 2007 housing crisis.

According to the newest RFP, the town is looking for “smart growth” plans from developers that properly utilize the mixed-use zoning that is found along Grand Avenue. “That area is the lifeline, the center, the heart of Baldwin,” said Town Councilwoman Erin King-Sweeney. “It brings north Baldwin and south Baldwin together.”

King-Sweeney has attended civic meetings and community forums throughout the area to educate people on the RFP and to invite input from community members on how to best serve the area. Plans for the downtown have been debated for nearly 10 years, and were a main topic for King-Sweeney when she was appointed to the board in January 2015 and during her campaign that November.

“I committed to the voters that I would do all in my power to bring revitalization to Baldwin, and I’m going to stick by that promise,” King-Sweeney said. “We at the town need to show genuine leadership and do all we can to not only revitalize Baldwin, but to use it as a showcase to show what can be done to other downtowns on Long Island.”

By developing the commercial properties along Grand Avenue, business owners hope that more residents will shop downtown. Sales taxes collected at local businesses increase revenue streams for stores in Baldwin. Though the economy saw a steep decline in 2007 and 2008, the recovery has gained steam in the years since.

“Our economic situation has improved,” said Erik Mahler, president of the Baldwin Chamber of Commerce. “People have more disposable income today, and businesses in the community are thriving.”

Mahler added that the downtown area could become more popular if it were redeveloped. “If you build it, they will come,” he said. “Everyone dreams of a place with shopping malls, restaurants and so on. Our residents are longing for places to partake in those activities.”

Along with King-Sweeney, Nassau County Legislator Laura Curran (D-Baldwin) has been a longtime proponent of downtown development. In June Curran sent a letter to potential developers, urging them to bid on the project. “We are a community that is hungry for our downtown to reflect who we are,” she wrote. “We’re already cool — we just need our downtown to catch up.”

As with many developments on Long Island, residents are weary of the blights on the community that come with new construction. In many instances, growth stalls due to the backlash, an issue that is now affecting development at Belmont Park in Elmont.

“Here we have an opportunity to actually do something about Grand Avenue,” Curran said. “Instead of saying no like we always do, let’s say yes and try to take a chance. It’s worth the risk, and I think that the benefits will far outweigh the negatives.”

The issue is above party divisions, Curran added. She is working with King-Sweeney, a Republican, because improving the local economy is of paramount importance to both of them. “She happens to be a Republican, I happen to be a Democrat, and we are 100 percent in agreement with this,” Curran said. “She’s a little bit of a rebel and I’m a little bit of a rebel, which is good. She’s committed to this.”

Curran said she hoped that the town could unite on this proposal after failed attempts in the past. “I feel like this is our shot, and I don’t want to blow it,” she said. “I think what will happen is that we’ll get the development, and everyone will be much happier.”