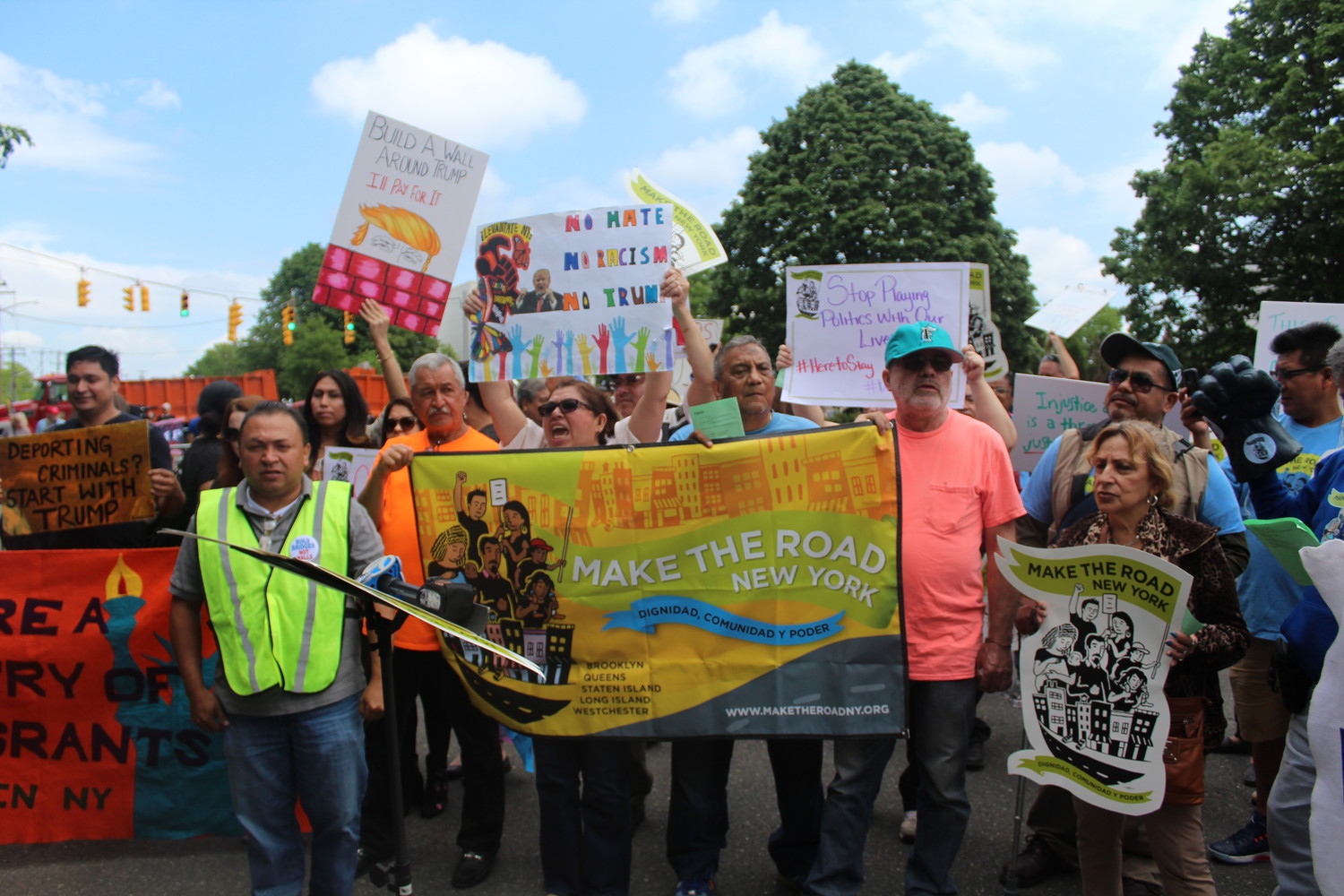 Long Islanders came out to protest or support Donald Trump before he met with Nassau and Suffolk County officials and politicians to discuss MS-13.
James Mattone/Herald 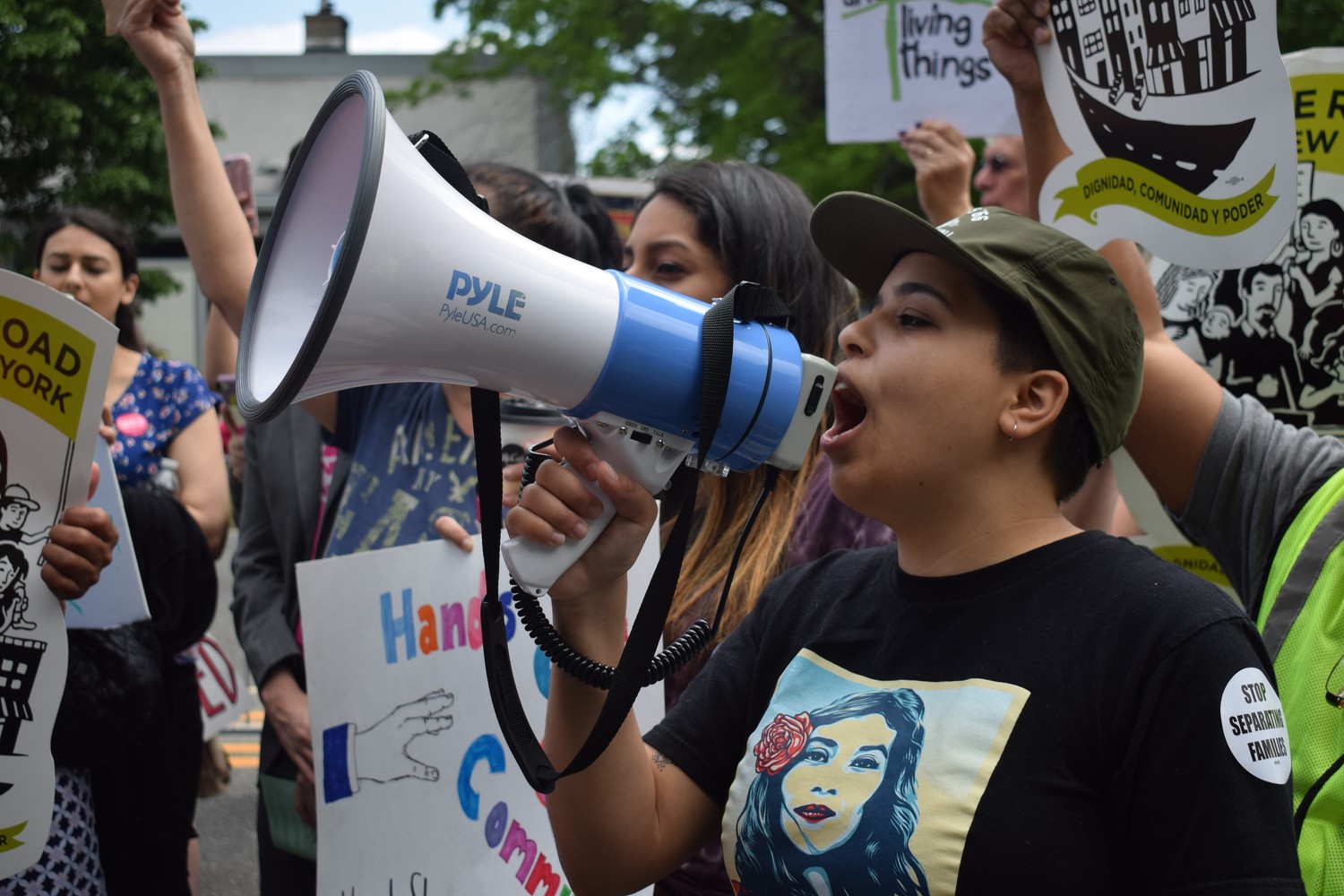 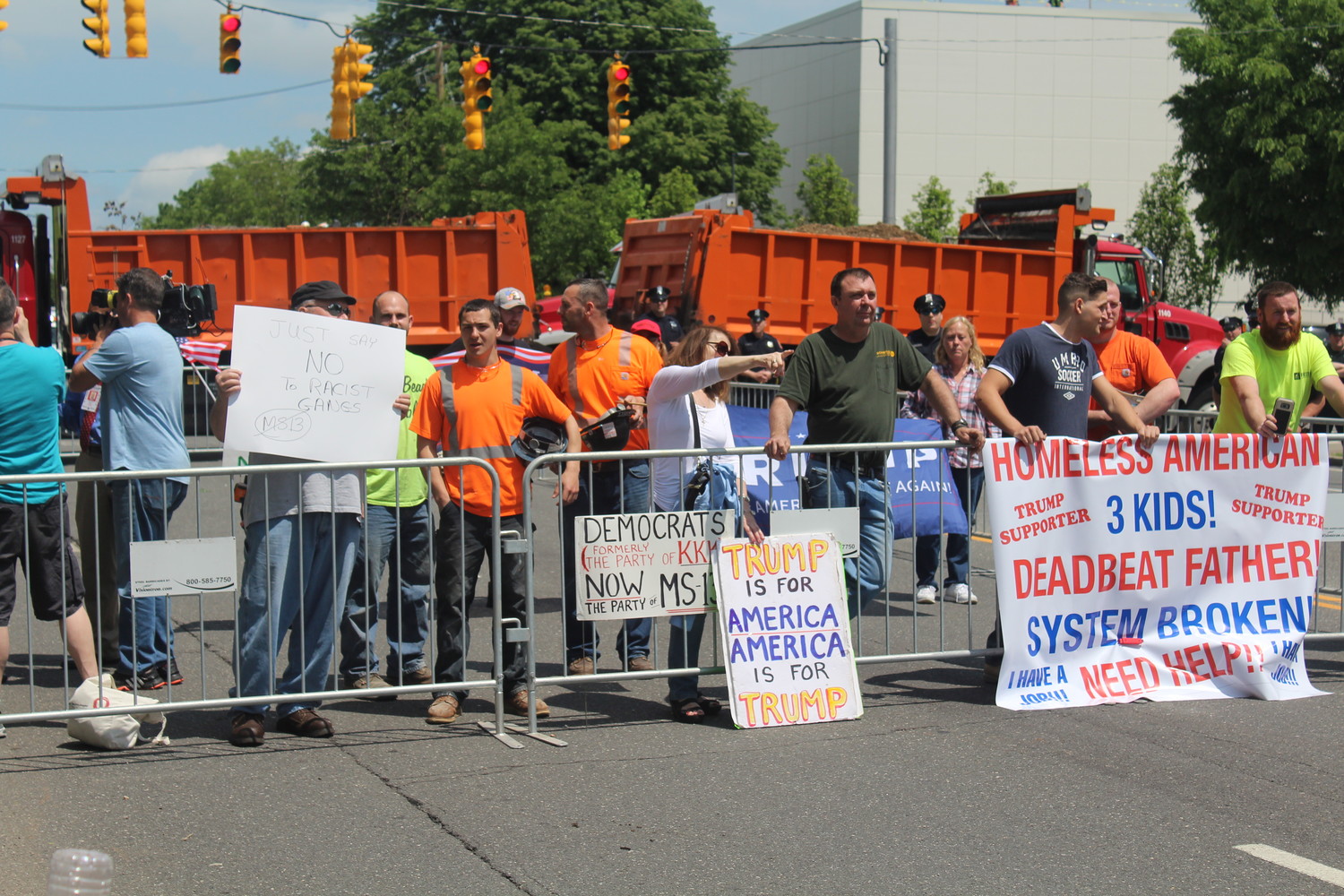 Trump supporters countered those who came out against Trump. Nearby construction workers also joined the crowd or observed the commotion while eating their lunch under some nearby trees.
James Mattone/Herald
Previous Next
By Ronny Reyes and James Mattone

UPDATE: This story has been updated to how it appears in the May 31 edition of the Wantagh and Seaford Herald-Citizens.

Dueling protests developed outside the Morrelly Center in Bethpage on Wednesday, as President Donald Trump and U.S. Rep. Peter King, a Seaford Republican, held a forum on the threat posed by El Salvadoran gang MS-13 on Long Island.

Advocates from Strong Youth, the Elmont Cultural Center, the Central American Refugee Center and others gathered within the free-speech zone set up by Nassau police around the center.

“El Pueblo Unido Hamas Sera Bensido — The village united will never be defeated,” protesters chanted in Spanish and English. “We are not one. We are not 10. We are millions.”

While protesters shouted, “Donald Trump, we are all immigrants!” some of Trump’s supporters interjected the word “Illegal!” When protesters chanted against Trump in Spanish, some who voted for him wondered aloud why they weren’t speaking in English.

Nicole Nuñez, of Bayshore, is an immigrant from the Dominican Republic, a  college student and a member of Make the Road NY. Her family came to the United States when she was 5, searching for a better life. She said that she has personally gone to Washington, D.C., to confront King.

“He said, ‘You’re not important, and you don’t matter,’” Nuñez said. “He said we should be thankful for ICE. He said Make the Road is not a legitimate organization. Well, he’s wrong. Make the Road helped me with my pathway to citizenship. And the first thing I did after my naturalization ceremony last Thursday was register to vote.”

“Us Jews will not allow it,” Hoffman said. “Jews were called subhuman in Nazi Germany. We will not allow the same thing to happen in 2018. Every human being is created in the image of God and deserves dignity and humanity.

Patrick Young, an attorney with CARACEN said, “Trump is stepping over the bodies of the 17 teens who were victims of MS-13.”

In the pro-Trump zone, meanwhile, Long Islanders such as Virginia Daly, of Long Beach, voiced their support for the president against those standing 100 feet away. Daly, a mother and grandmother, said she supported Trump and legal immigration, but not those who come “illegally.” “They are welcome here — the legal ones,” Daly said. “The country was built on the gifts they brought.”

Meryl Fischer, of Plainview, said she supported Trump’s agenda. “I support the wall,” she said. “I mean, that’s common sense. If we’re in a war against terror, why do we have open borders?”