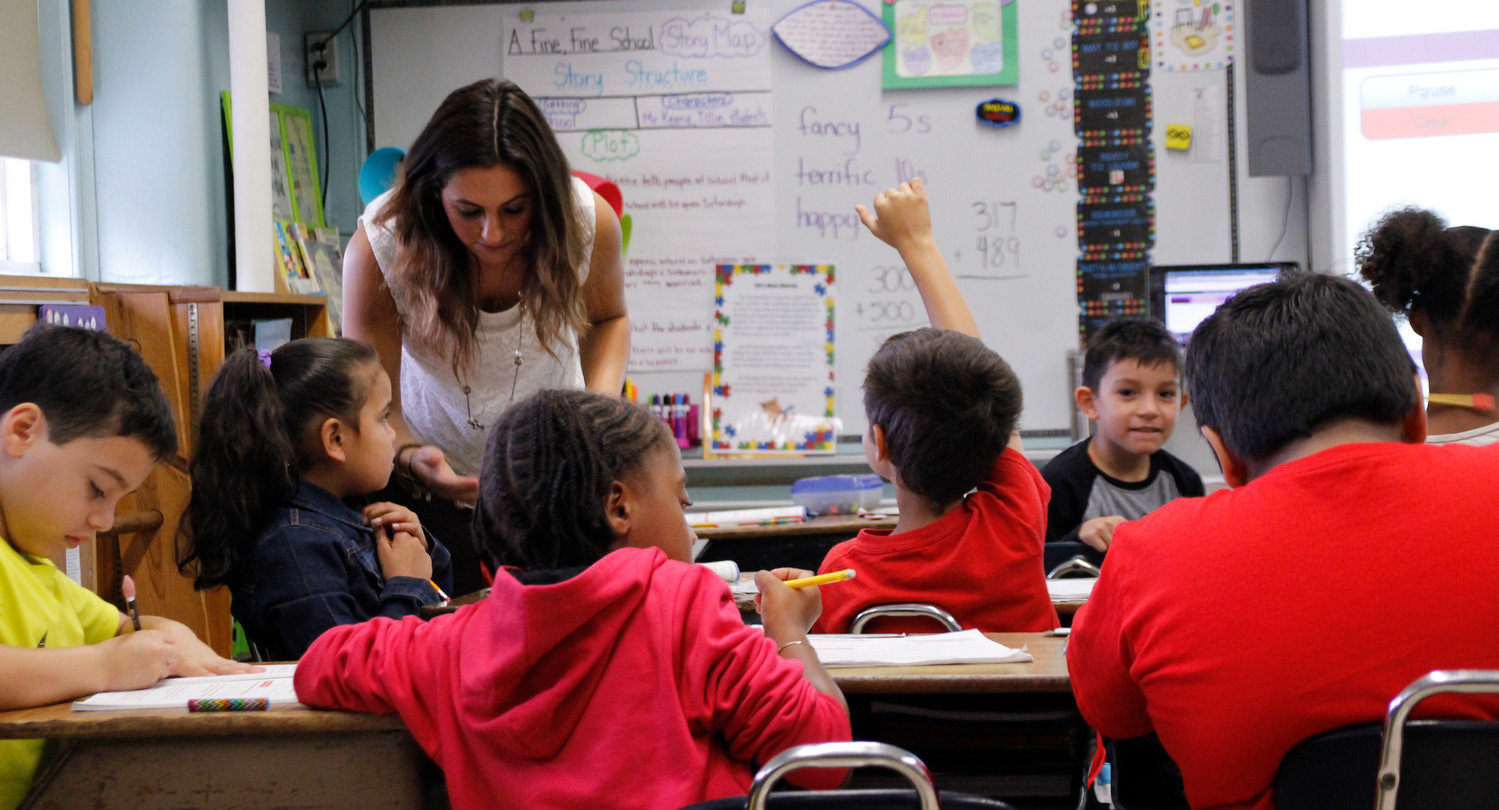 NatHalie Cheng, Alejandro Sosa, Meaghan Fleming and Lindsay Fletcher are surveying parents on the prospect of establishing a dual-language program in District 24. Above, students in a Brooklyn Avenue Elementary School classroom in 2017.
Herald File Photo

I increasingly see a need for anybody’s children to be bilingual.”
Alejandro Sosa District 24 parent
By Juan Lasso

Four parents have joined forces to push for a dual-language program in District 24. The stories of Nathalie Cheng, Alejandro Sosa, Meaghan Fleming and Lindsay Fletcher strike a similar chord. All of them lament—despite the well-meaning efforts of school and family—not becoming proficient bilingual speakers. Now, as adults with children of their own, they wish a different story for their young children and other children like them.

Alejandro Sosa, an assistant principal who will be sending his children to District 24 in a couple years, is the son of two Puerto Rican parents. “One of my biggest regrets is that although my parents both tried to help me be a dual-language speaker and be bilingual, the supports weren’t there for me growing up,” said Sosa, whose parents signed him up for various clubs and Saturday programs, but they did not yield the result he wanted.

“I think most parents want their children to be better than them, and for me, this is what this is all about…I increasingly see a need for anybody’s children to be bilingual.”

In the vast, often complex menu of language-learning programs and methods, a dual-language program stands apart for its immersive learning experience. Most language programs aren’t designed for dual-language mastery, but to teach English to non-native English language learners by introducing English to them in modest increments—eventually weaning students off of their reliance on their mother tongue.

“When I was younger, it was understood and impressed upon people that you didn’t want your kids to be [English as a Second Language] students. If you were an immigrant, you wanted your children to learn English right away,” Cheng said. Her mother told her kindergarten teacher when she started school that she only speaks English.

But dual-language learning programs defy both the conventional premise and piecemeal approach of language learning. The program aims for mastery of the two target languages (such as Spanish and English) by giving instruction and learning of all other subjects such as science, math or social studies in the target languages. Students also relate and connect with their peers and teachers through the target languages. The logic is that this mental balancing act that goes on between a student’s first and second language strengthens their handling of both languages, according to officials.

Many studies have already shown several cognitive benefits of learning a new language, including improved working memory, enhanced information processing and problem-solving ability, and improved communication skills in general. While dual-language learning programs are seeing a growth across the country, they still are rare among school districts locally.

But Sosa cautions that dual-language programs for children are becoming less of a nice-to-have in this day and age. Businesses and various institutions in the U.S. are increasingly in the market for bilingual candidates to cater and serve the needs of an English and Spanish-speaking base. In some areas of work and fields of higher learning, fluency in both languages is a make-or-break qualification. Currently, the United States stands as the second-largest Spanish-speaking country. Yet at its current pace, the U.S. is projected to be home to the most Spanish speakers by 2050 — 132.8 million, with 30 percent of them using Spanish as their native tongue.

“Valley Stream has a very large Spanish-speaking population, which I love. But it’s always the non-native English speakers trying to learn English. In a dual-language program, students can use both languages. English speakers can be apt to think in Spanish when doing their math, for example,” said Fleming, Parent Teacher Association president at Brooklyn Avenue School. “It would bring a nice cohesiveness to the classroom to have it go both ways…[In a dual-language program], it’s not ‘you’re learning my language.’ It’s ‘we’re learning each other’s languages.’”

“No doubt, this is one of many programmatic opportunities districts might consider that can benefit students,” said Superintendent Dr. Sturz, in a written statement to the Herald. “However . . . a district must consider need, benefit, equitable access, human and financial resources required, and sustainability over time. While developing a language other than English is certainly an asset for any individual, New York State elementary education standards focus on culturally responsive whole child development with foundational skills in the areas of literacy and math as the primary focus.”

Sturz further stated that the district once offered an Language Other than English Spanish program several years back, which was later ended because of fiscal constraints. However, the district is currently discussing ways to reinstitute a Spanish program for grades five and six through grant funds beginning in January 2022, which would serve as exposure and preparation for courses students will encounter at the secondary level.

In reference to the program, Cheng said it would “leave students with a knowledge of foreign language but not proficiency.”

“A dual-language program will better ensure that students will graduate fully bilingual and be well-prepared for a global society,” Cheng said.