Weapons and drugs found at jail in East Meadow 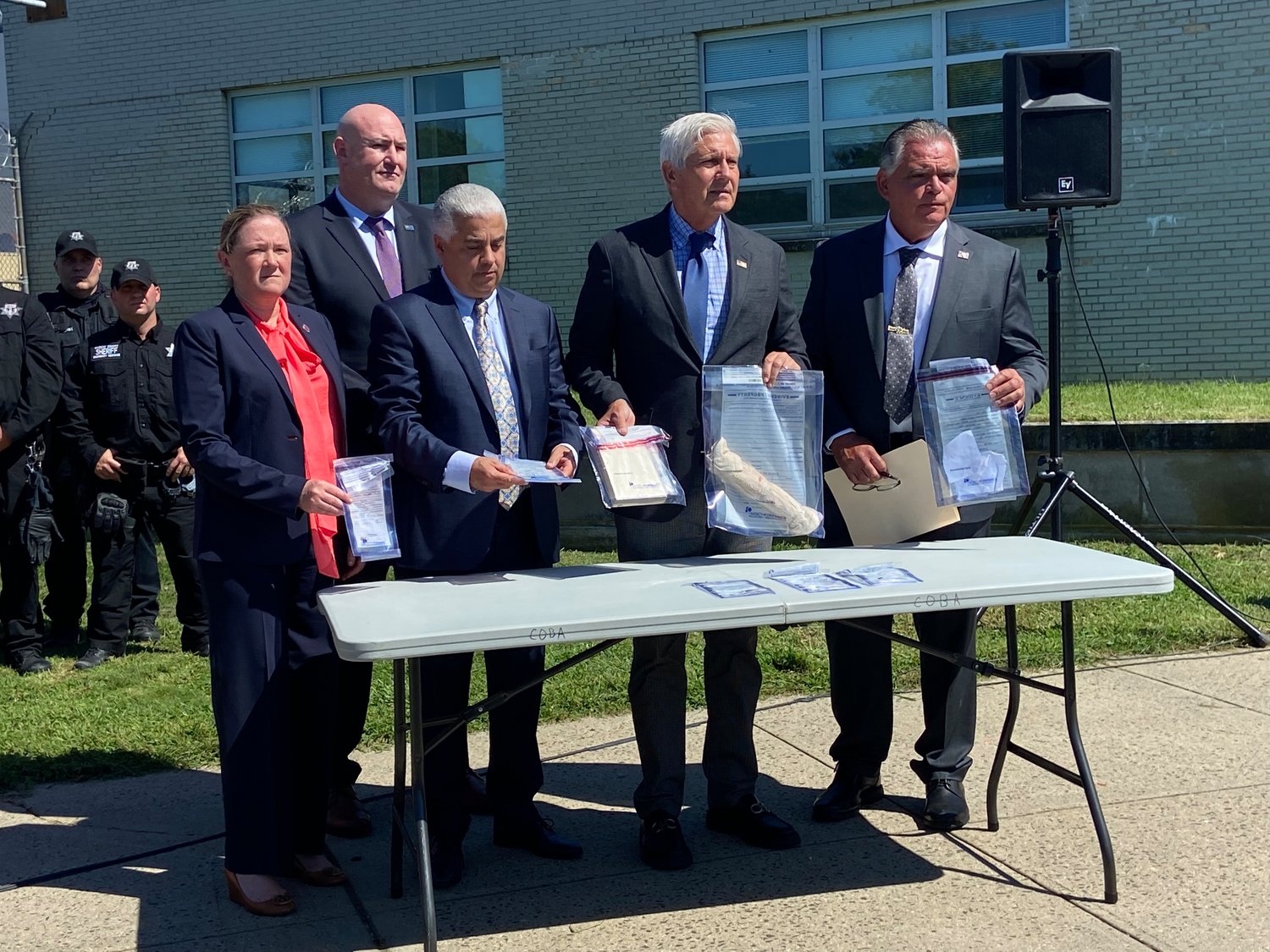 Blakeman, second from right, with officials from the Nassau County Correctional Center, displayed the contraband that “Operation Clean Slate” turned up in the jail. Items included weapons and drugs.
Mallory Wilson/Herald 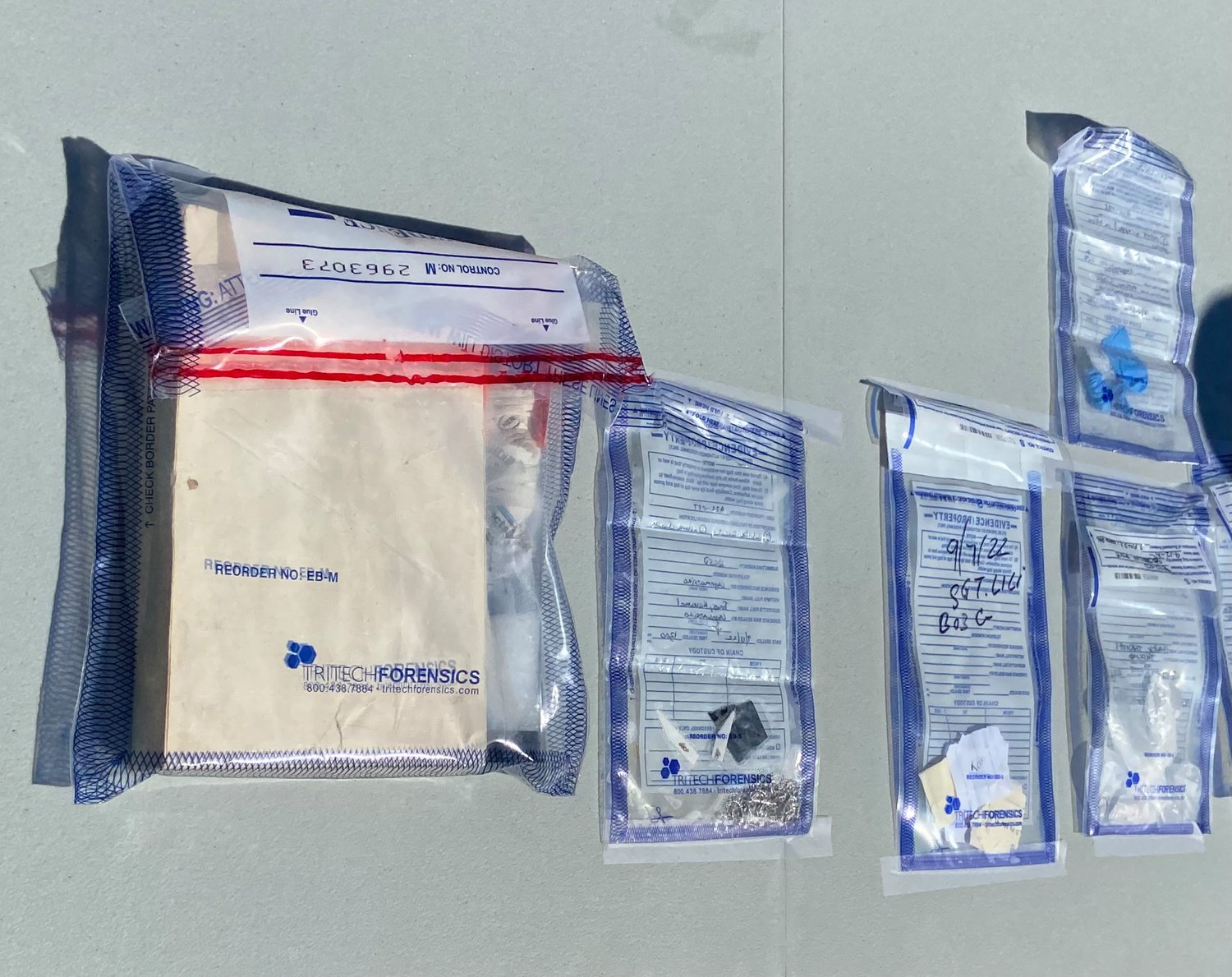 Nassau County Executive Bruce Blakeman said that officials were shocked by how much contraband was found in the jail. He said that an investigation was being conducted to find out how the items were smuggled in.
Previous Next
By Mallory Wilson

Twenty inmates are under investigation at the Nassau County Correctional Facility after weapons and drugs were found in the jail in East Meadow.

The contraband was found during a raid as part of an operation to clean up the jail under the new leadership of Acting Sheriff Anthony LaRocco and Commissioner of Corrections Michael Sposato.

“I authorized (LaRocco) to conduct a shakedown in the correctional facility to be sure that the facility was safe from any weapons, drugs or other contraband,” Blakeman said outside the jail on Sept. 14. “The results of the raid were startling.”

Corrections officers conducted the raid, called “Operation Clean Slate,” and uncovered books with weapons made in the jail hidden inside, a black ceramic straight-edge razor blade with the glove used to make it, two X-Acto razor blades, assorted paper laced with synthetic cannabinoids, and possible narcotics. Assorted pills were found along with a jail-made bat, a lighter, and numerous other items.

“This is unacceptable, and will not be tolerated as long as I am sheriff,” LaRocco said. “My number one priority will be to keep inmates and our officers safe.”

Blakeman admitted that the officials were shocked by the amount of contraband found.

“From time to time, something’s going to get in,” he said. “Not just here, but every correctional facility in the United States. It’s not 100 percent foolproof, but we did not expect this amount, and that’s why I have a new leadership team here.”

LaRocco announced that an ongoing investigation would be conducted to determine how the contraband was smuggled into the correctional center, and those responsible will be held accountable. Blakeman pointed out that the incident has been handed to the Nassau County Police Department’s Third Squad for an investigation.

There’s no protocol in place at the jail stating how many raids or sweeps are to be conducted, but no one at the facility knew when the last one had been conducted.

“Criminal activity did not end with incarceration, but continued behind bars for these individuals,” Sposato said.

Sposato, sheriff of the center for 10 years before being replaced by Vera Fludd, has a long track record with several concerns including correctional facility safety issues and inmate healthcare. He said that he is proud of the teamwork between the new administration and the correctional staff.

Blakeman said when he first came into his position of county executive in January 2022, that there were three things of “paramount concern,” to him. One being the security of the facility to protect the surrounding community and the county, the safety of the corrections officers, and three being the humane treatment of the prisoners that were charged to guard.

He said he believes the new team he put in position will make sure his goals are met.

“Now with cashless bail,” Blakeman said, “we are seeing less prisoners in our jails, but much more violent prisoners and therefore, we have to do a better job.”

New York State’s bail reform law passed in 2020 called for the release of most non-violent criminal defendants while they await trial or a plea deal. Blakeman has been vocal about his dislike of the bail reform law, and in January, signed an executive order requiring the county Police Department to issue daily reports with pending criminal case data and the bail status of those rearrested.