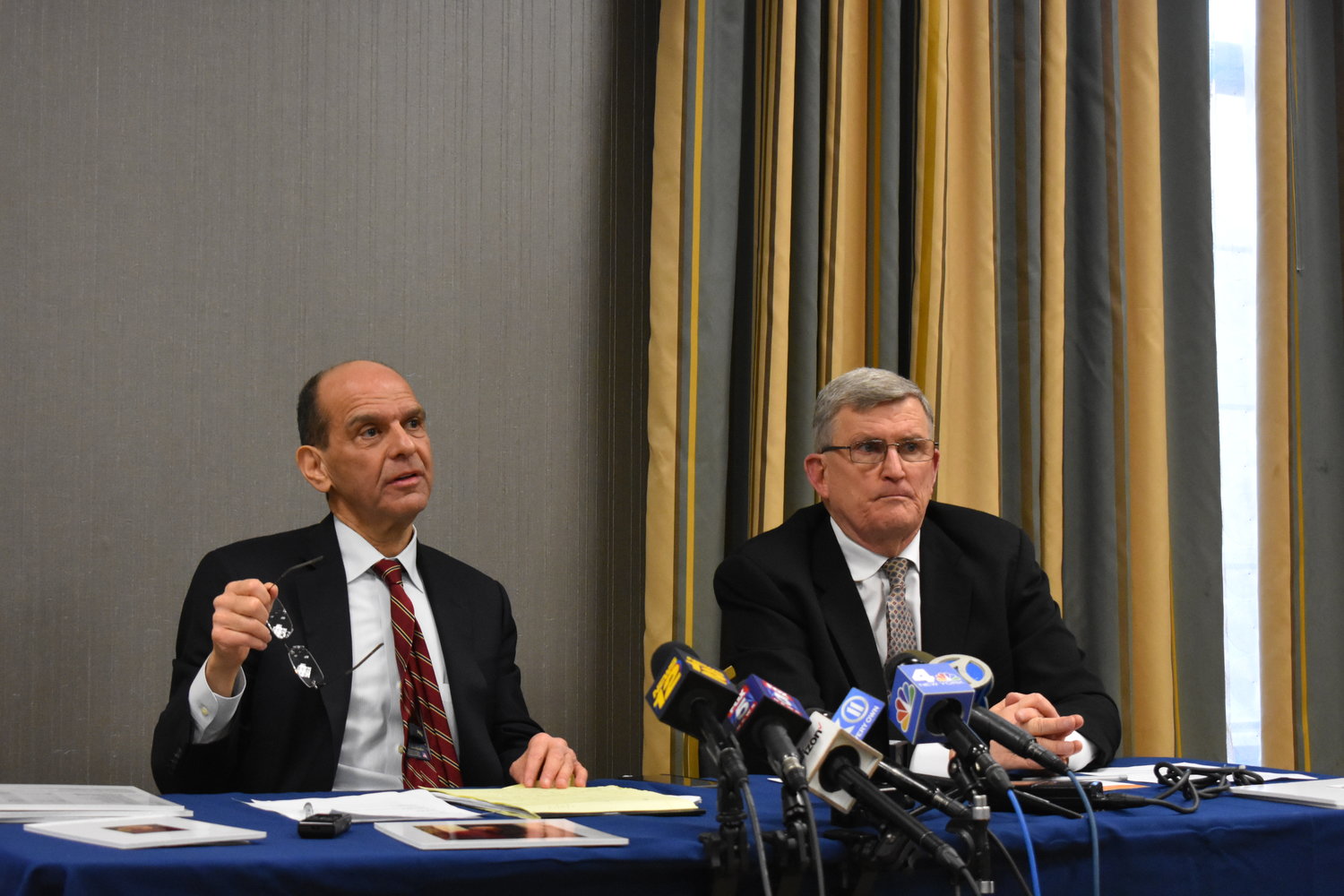 Boston attorney Mitchell Garabedian, left, held a news conference on Tuesday in Rockville Centre to report that two women have alleged that they were sexually abused at St. Agnes Cathedral between 1961 and 1971. Robert Hoatson, who co-founded Road to Recovery, joined him.
Briana Bonfiglio/Herald 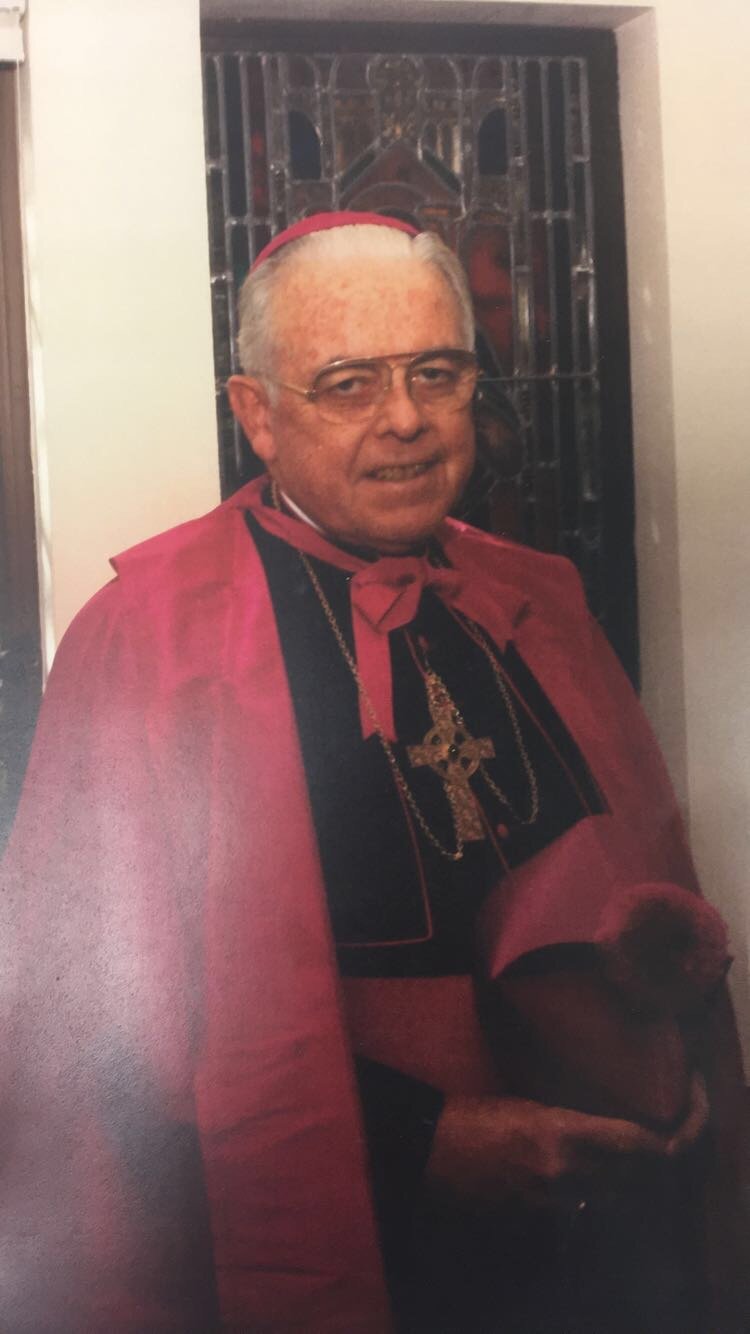 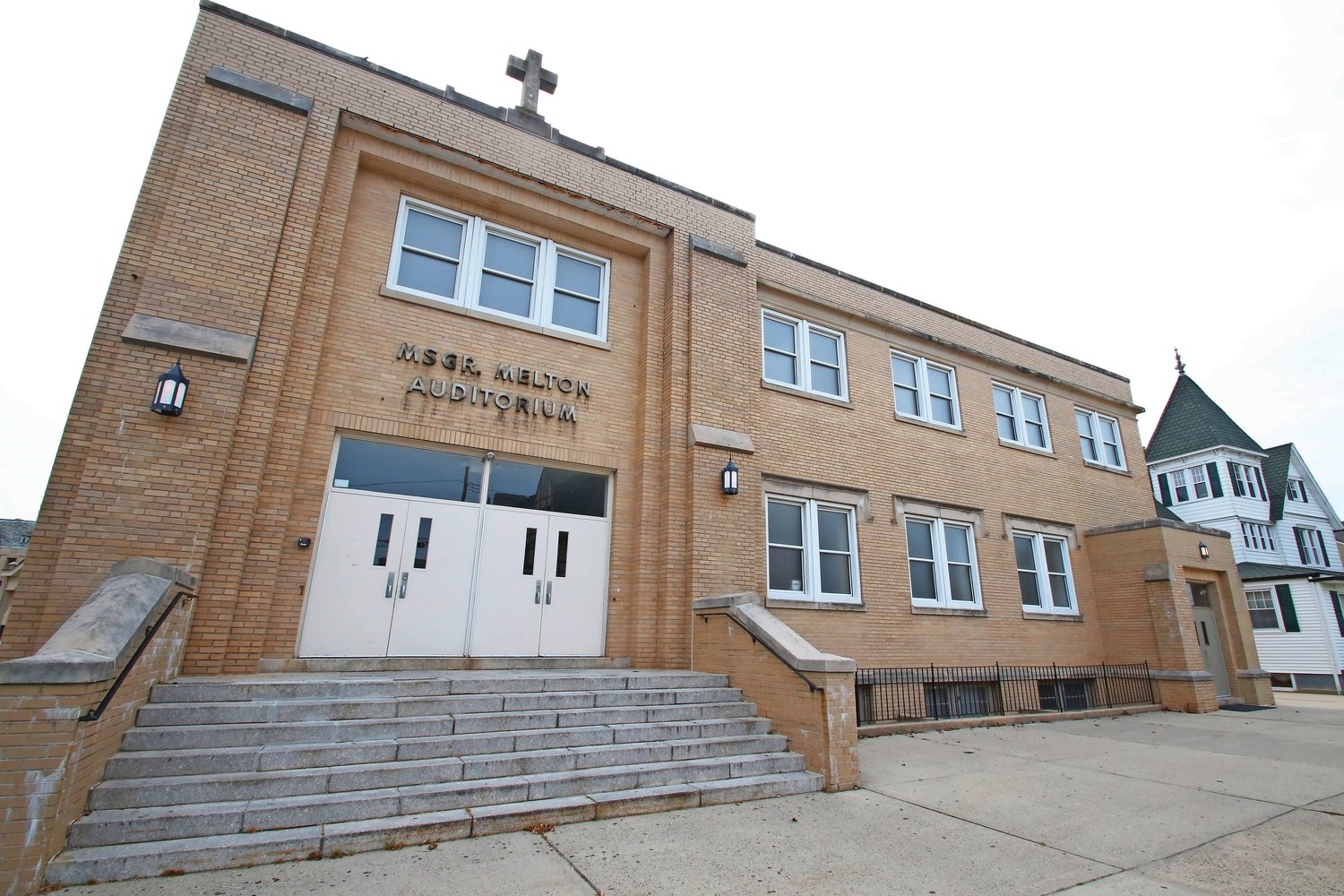 The auditorium at St. Agnes is named after the late Melton, who was one of three clergy accused of sexual abuse last week.
Christina Daly/Herald 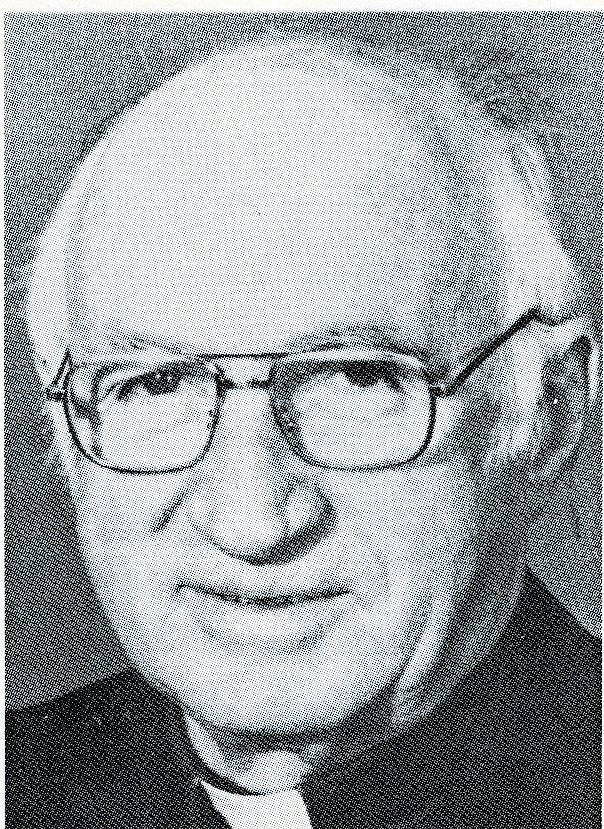 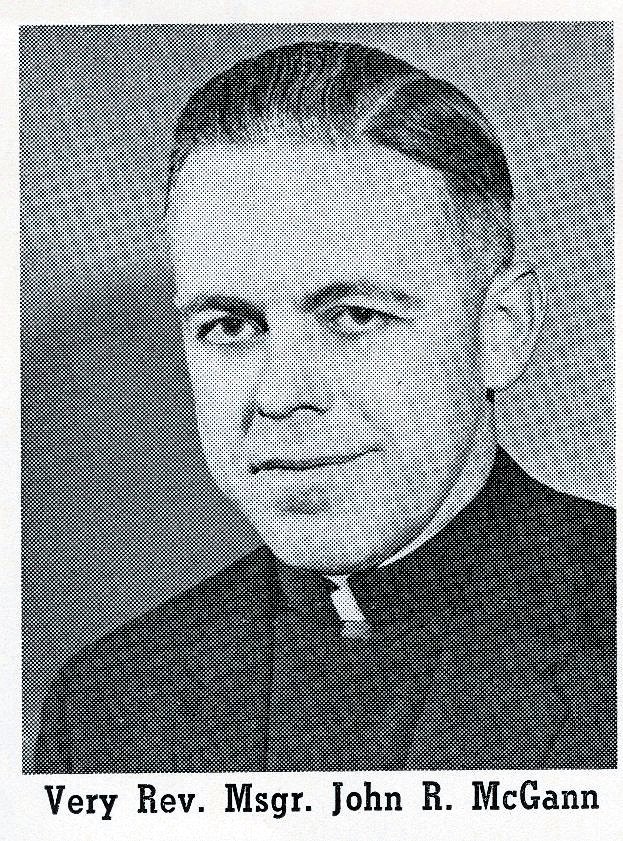 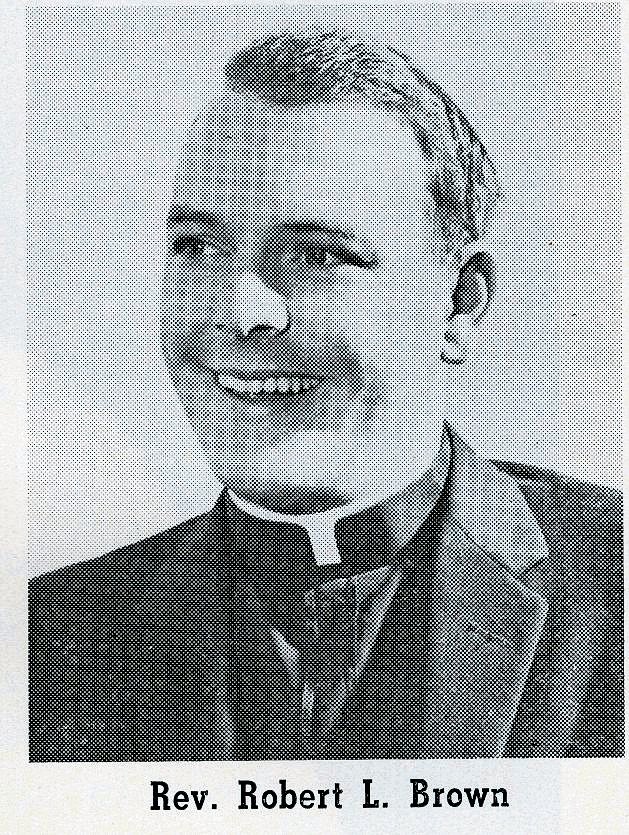 Two women who grew up in Rockville Centre say that three clergy members and a parish worker at St. Agnes Cathedral sexually abused them when they were children, Boston attorney Mitchell Garabedian said at a news conference on Feb. 19. The women, now in their 60s, were not identified.

One woman accused Bishop John R. McGann, who was a monsignor and auxiliary bishop at the time, along with Monsignor Edward L. Melton and the Rev. Robert L. Brown, all of whom are now dead, of sexually abusing her between 1961 and 1971. The other woman claims she was abused by McGann and Melton in that period, as well as, on one occasion, by a man who was the parish’s superintendent of grounds for decades. It is unclear whether the groundskeeper is still alive, so the Herald is not identifying him.

“I’d like to say it’s shocking, but it’s become par for the course for the Catholic Church,” Garabedian told reporters in a conference room at the Hampton Inn & Suites on Merrick Road. “It’s time to take Bishop McGann’s name off of school buildings, off of foundations, off of any sort of advertisement that the Catholic Church does.”

The now-defunct Bishop McGann-Mercy High School in Riverhead was named after McGann when the diocese took it over in 2001. The school closed last year due to low enrollment. Mercy Medical Center’s Bishop John R. McGann Radiology and Imaging Center also bears his name. St. Agnes’s auditorium is named after Melton.

Garabedian, who was portrayed by actor Stanley Tucci in the Academy Award-winning film “Spotlight,” about the Boston Globe’s series of stories detailing the abuse allegations against priests in Boston, is representing the alleged victims. He said he had notified the Diocese of Rockville Centre about both cases of alleged abuse. Though a lawsuit has not yet been filed, he said, he has asked for a settlement of $10 million for each victim.

“We take all allegations seriously,” Sean Dolan, spokesman for the Diocese of Rockville Centre, wrote in a statement. “Allegations concerning one victim were brought to our attention by Mr. Garabedian on [Feb. 15], and those allegations were immediately reported to the Nassau County D.A.’s office the same day.”

Brendan Brosh, a spokesman for District Attorney Madeline Singas, confirmed last week that the diocese notified the D.A.’s office about the allegations of one of the victims against three deceased clergy members that day.

“We have not been notified by the diocese about the allegations of the second victim, who has not yet been identified, but will fully review the matter,” Brosh said. “The district attorney’s Special Victims Bureau reaches out to all alleged victims of sexual abuse, and we will do so here when we learn the victim’s identity.”

On one occasion, the two survivors, who were both 11 years old at the time, were sexually abused in the same room, Garabedian said. One girl, whose family was involved at St. Agnes, went to fulfill duties at the church around Christmas 1967 and brought along the other girl, who was her friend.

In a St. Agnes conference room, McGann and Melton passed the girls around on their laps, Garabedian said. Each time they were passed, the men fondled and penetrated them with their hands. The girls did not see the abuse happening to each other, but knew they were both being passed back and forth. Brown and one or two unknown priests were also in the room, Garabedian noted, and the clergy members were drinking alcohol.

The two women did not speak again until recently, when they came out with their story.

The friend was previously sexually abused when she was 5, Garabedian said. When she went to the church basement to get a drink of water, the groundskeeper allegedly lifted her and fondled her. These were the only two occasions she experienced abuse at the parish, he said.

Melton was appointed monsignor of St. Agnes in 1967, and served until 1994. He died in 1994, at age 82. Brown served at St. Agnes from 1958 to 1968, and died in the mid-1990s. Garabedian said the women spoke out after hearing other survivors tell their stories on the news. He spent months compiling educational, criminal, medical and other records, which he said support the two victims’ claims.

At the news conference, Garabedian called on the diocese to hand over what he called “secret files,” documents that could reveal more about sex abuse in the church, and for McGann to be posthumously defrocked.

“There isn’t any amount of money that can bring back what a child has had stolen from them,” he said. “It really sends a person’s life on a different trajectory. They lose the ability to have self-esteem, self-respect, a connection with religion.”

Garabedian noted that the claims against a longtime bishop such as McGann indicate the pervasiveness of clergy sex abuse at all levels in the Catholic Church.

“This man was on the fast track of the Catholic hierarchy, just like many others have been,” said clergy sexual abuse survivor Robert Hoatson, who co-founded Road to Recovery, an organization that helps fellow victims. “So how many of those are in the same boat as John McGann, who sexually abused children and, because of their positions, thought no one would ever find out? But I just go back to scripture. It very clearly says, ‘There is nothing concealed that will not be revealed.’ And it’s all coming out.”

To Garabedian’s knowledge, no other sex abuse allegations have been made against McGann, Melton or the groundskeeper. He has, however, represented five victims who claim that Brown sexually abused them.

Sean Patrick Brennan, 43, was an altar boy at St. Agnes from 1984 to 1993, and served Mass with McGann and Melton many times. The Rockville Centre native said he was “shocked” to hear the allegations against the two men. He did not know Brown or the groundskeeper.

“I was surprised, because they were curmudgeonly types who wouldn’t be going around flirting,” Brennan recalled. McGann was “a stodgy, old-school conservative. He seemed like someone you would never expect this from. You assumed they were angels, because that’s what the church wanted you to think.”

Brennan, who now lives in Malverne, added, “We hear so much about boys who grew up and accuse priests, and not women as much. This is a good reminder that it has nothing to do with sexuality. People can be accused or guilty of crimes regardless of being straight or gay.”

The women’s claims came just days after Gov. Andrew Cuomo signed the Child Victims Act, which raises the age in the statute of limitations for people to seek criminal charges against their abusers from 23 to 28; allows victims of such crimes to initiate civil lawsuits before they turn 55; and provides those whose claims have been time-barred with a one-year window — beginning in August — to initiate lawsuits.

“These courageous women have come forward, and in doing so, became empowered,” Garabedian said. “When a victim comes forward, they empower themselves, other victims, and they make the world a safer place for children.”