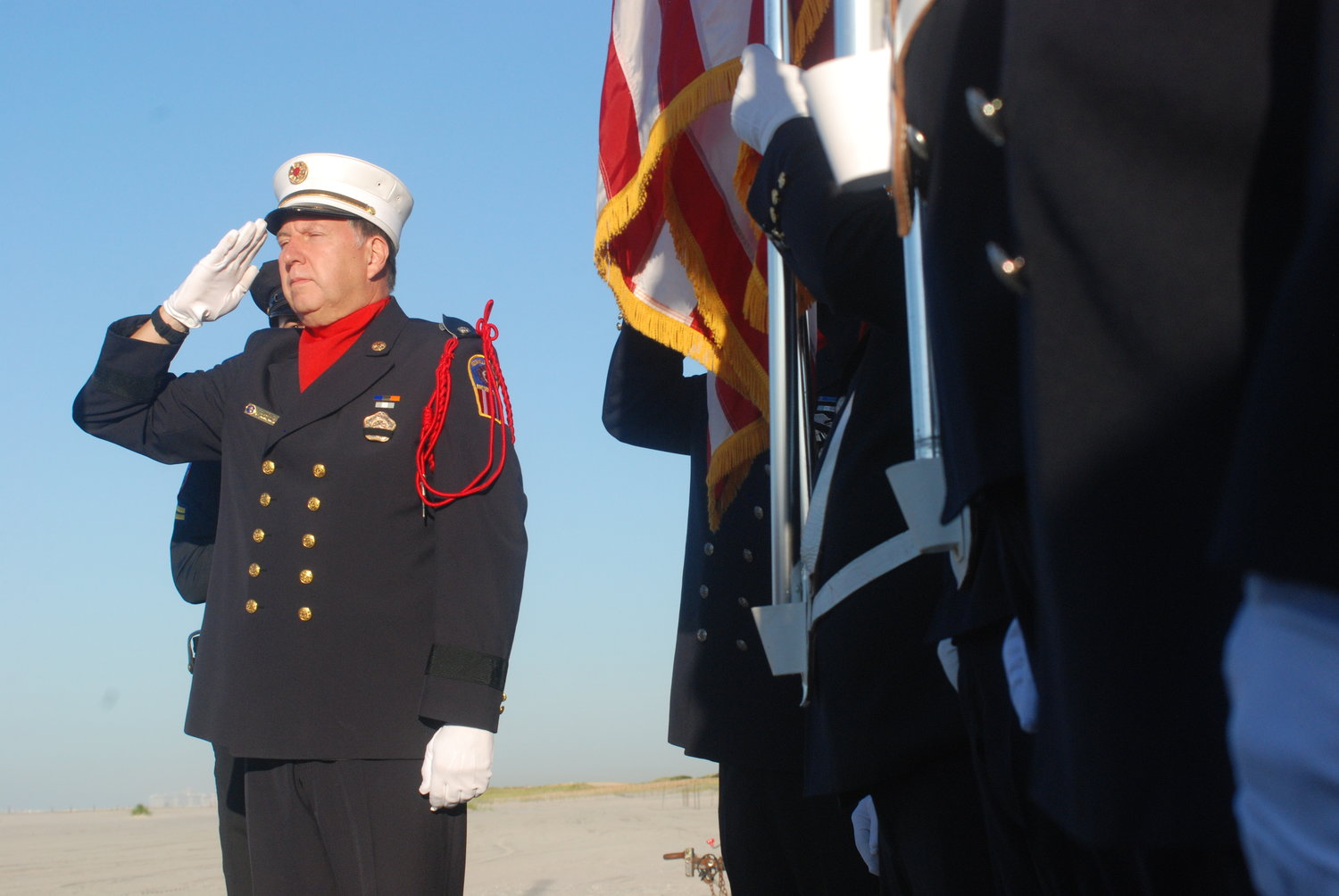 Members of the Rockville Centre Fire Department served as the color guard at the Town of Hempstead’s 9/11 ceremony on Saturday to mark the 20th anniversary of the terrorist attacks on the World Trade Center and Pentagon and in Shanksville, Pa.
Scott Brinton/Herald 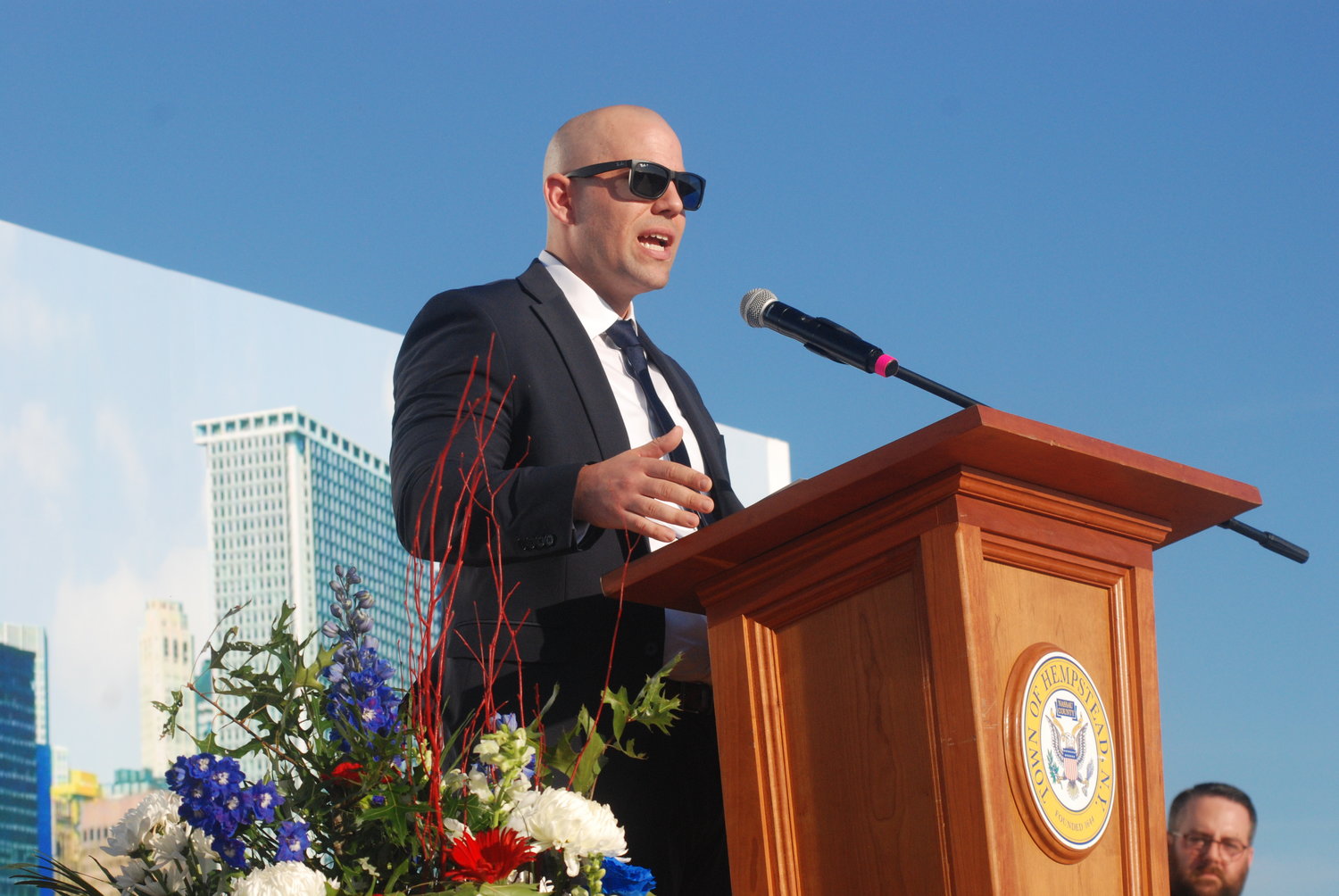 New York Police Department Detective Vincent DeMarino spoke of his father, also Vincent, of Valley Stream, who died in December 2019 of a brain tumor directly linked by his doctors to his work as a first responder at ground zero in the months after the 9/11 attacks.
Scott Brinton/Herald 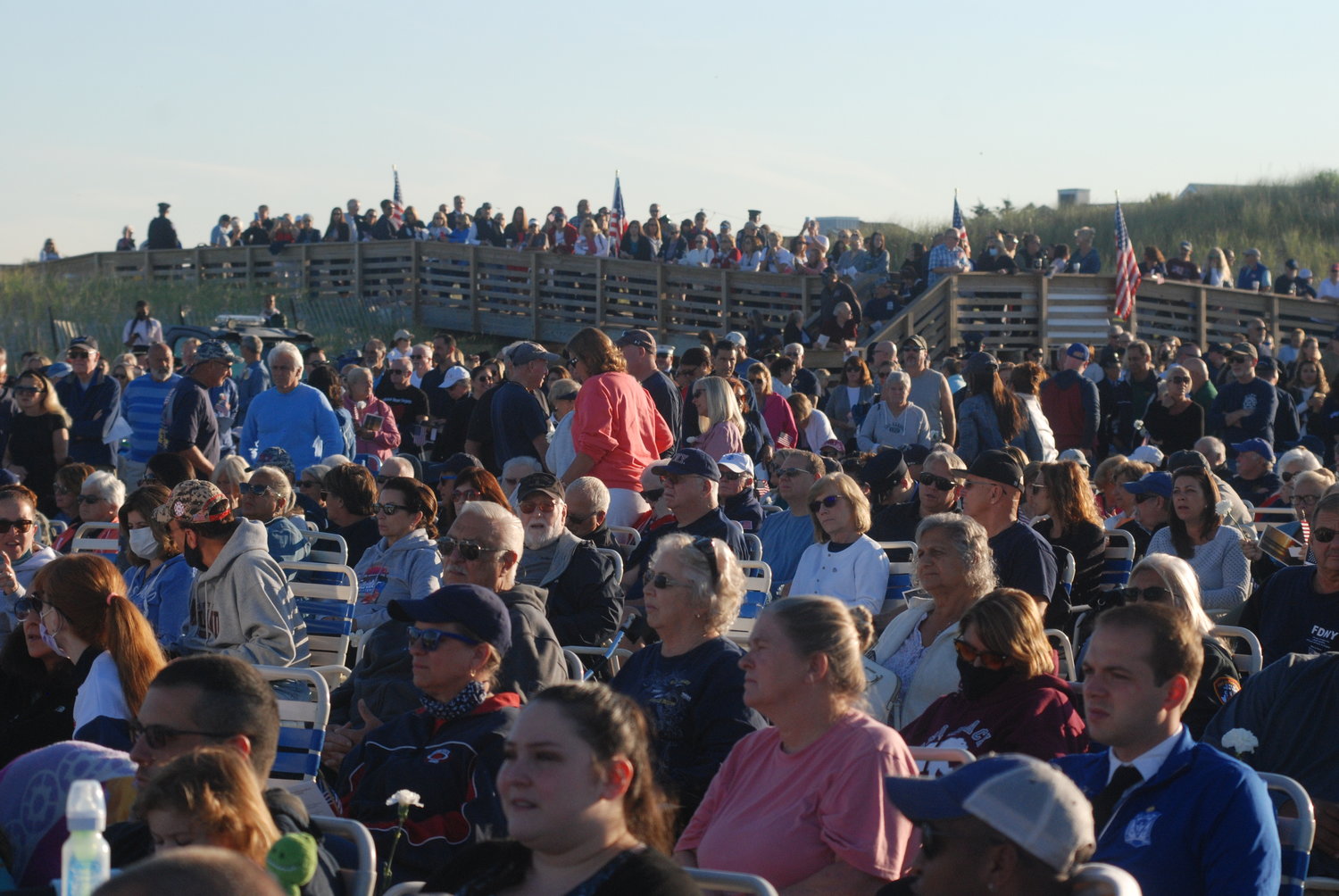 An estimated 2,000 people turned out for the town’s 9/11 ceremony.
Scott Brinton/Herald 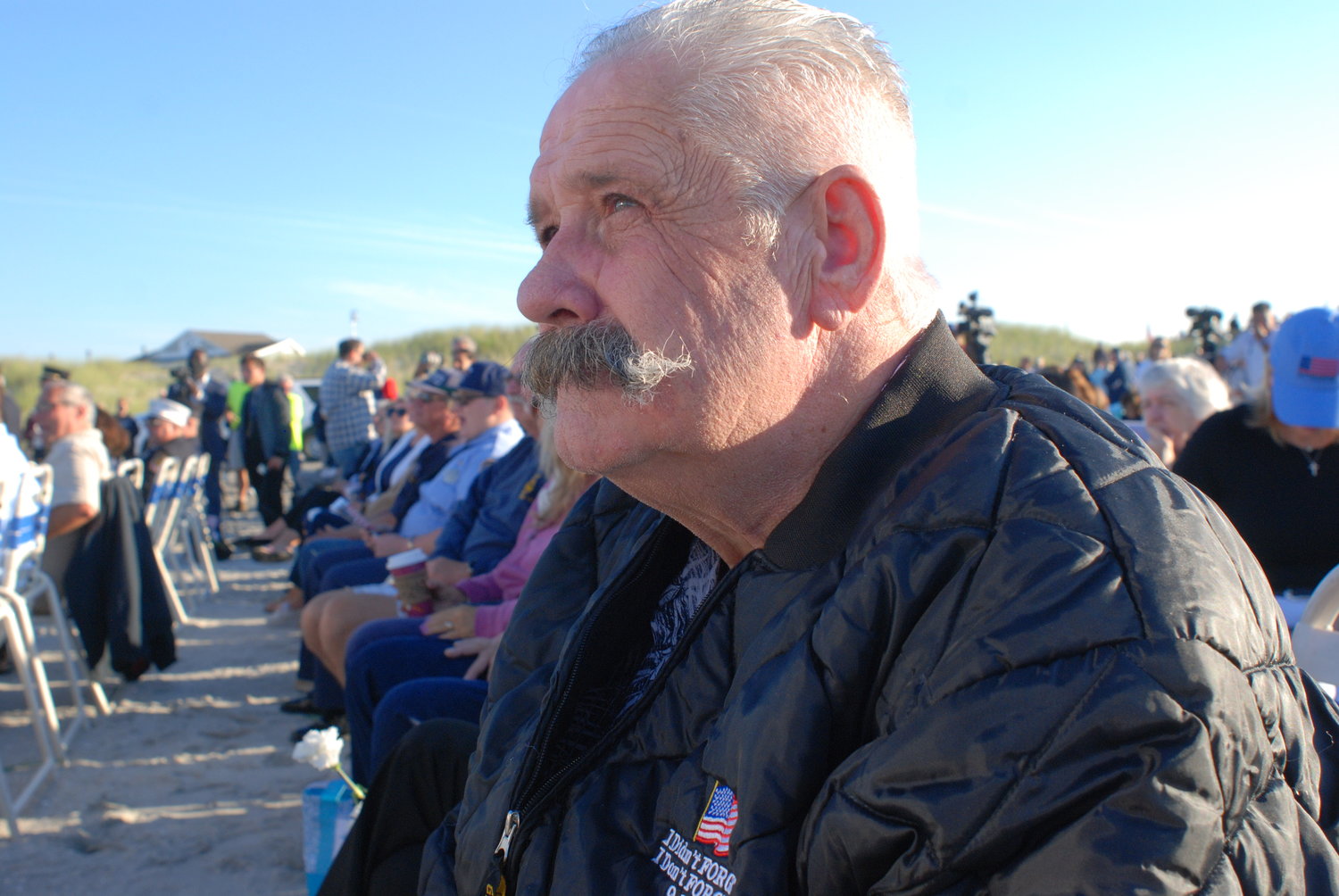 Among the attendees was Todd Gleason, 61, of Island Park, a crane operator who removed the last piece of World Trade Center steel from ground zero.
Scott Brinton/Herald 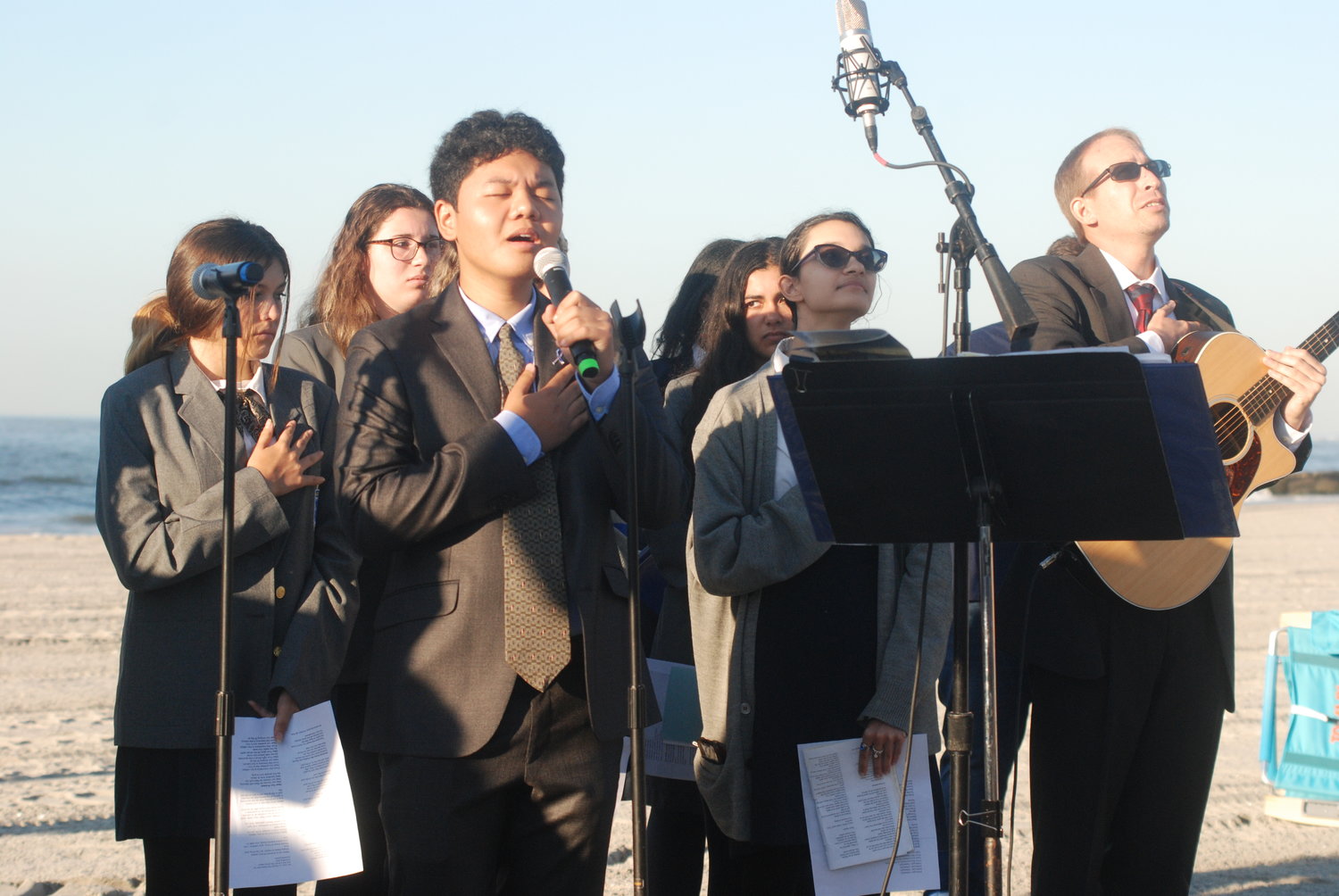 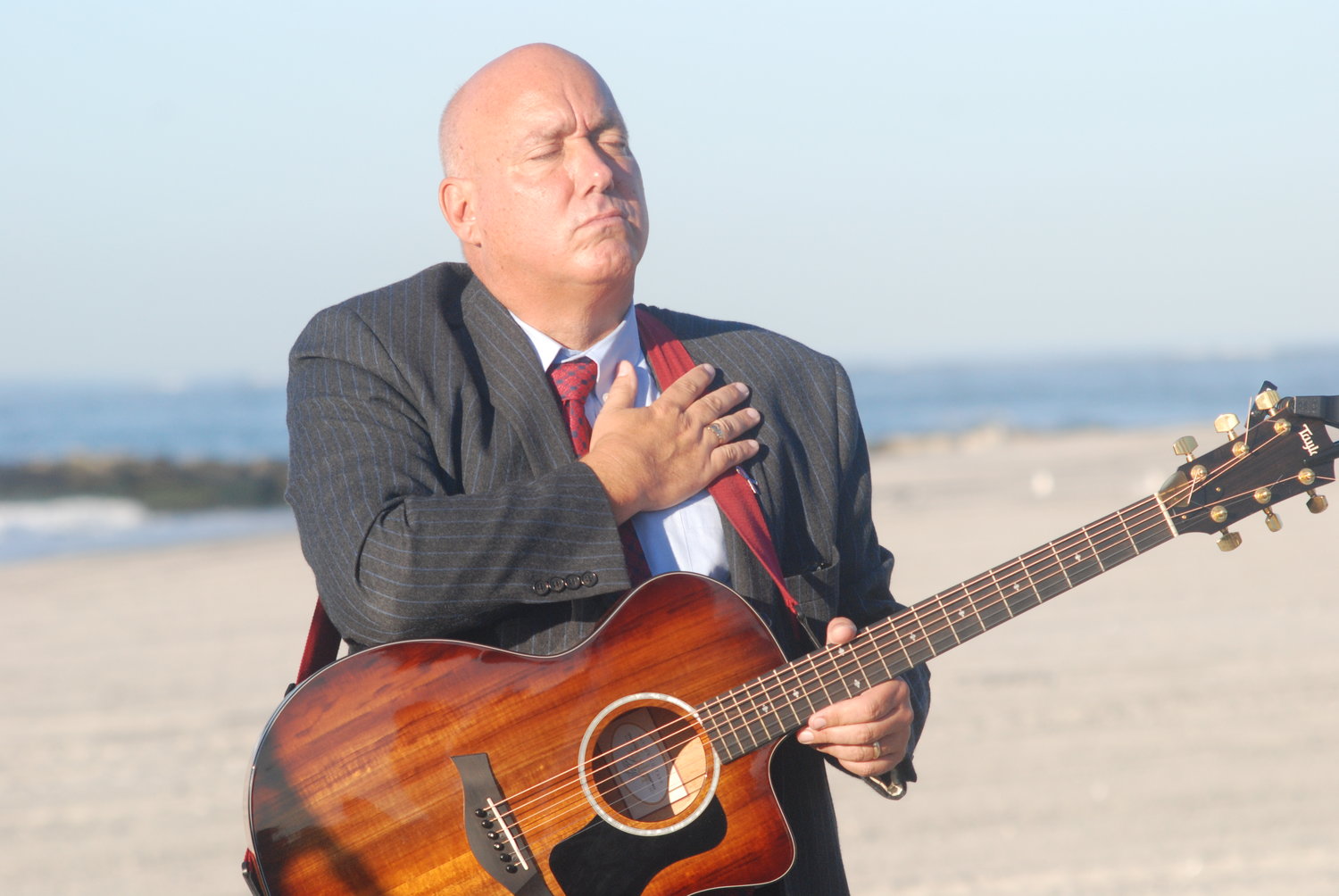 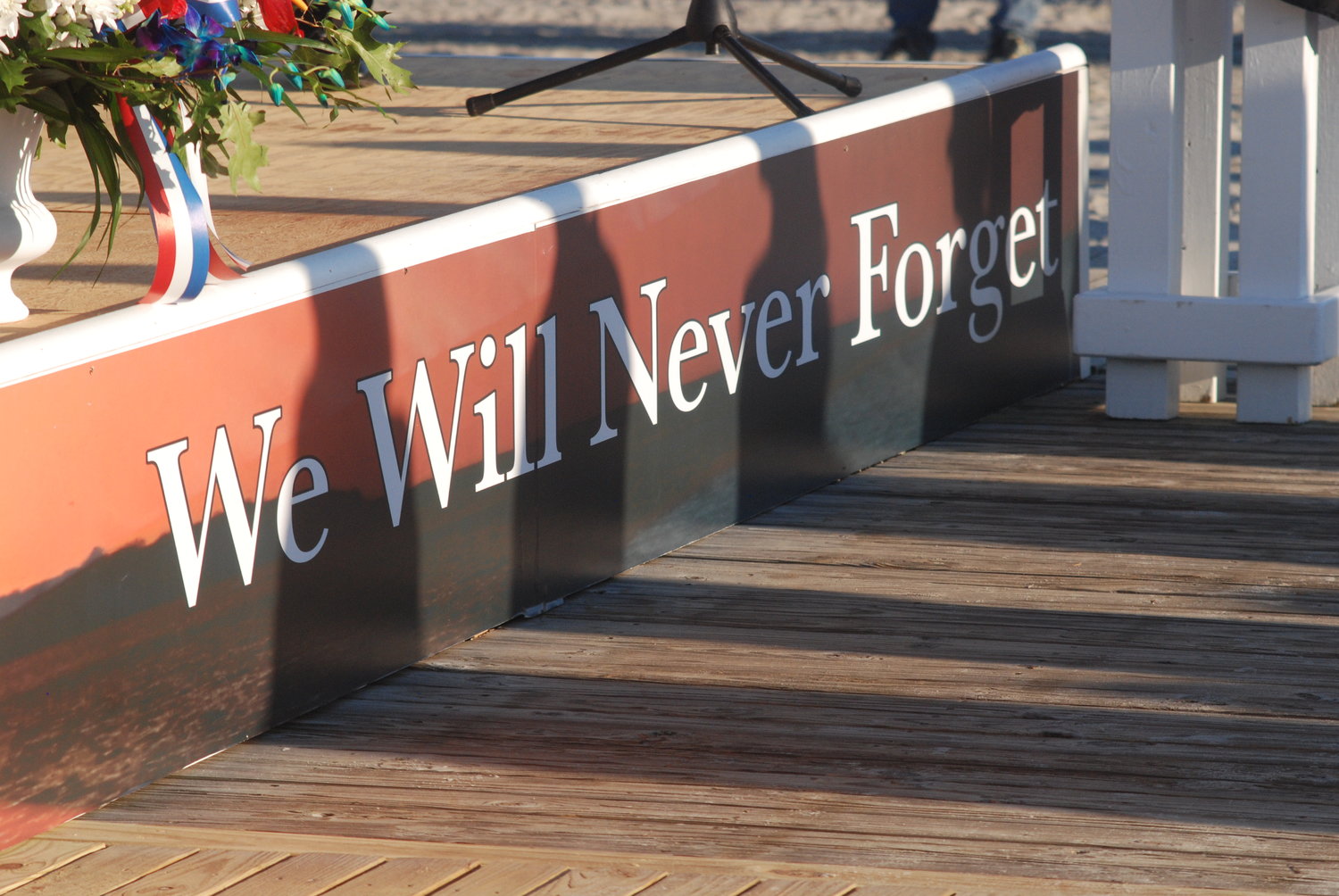 "Never forget" 9/11 was a consistent theme throughout the program.
Scott Brinton/Herald 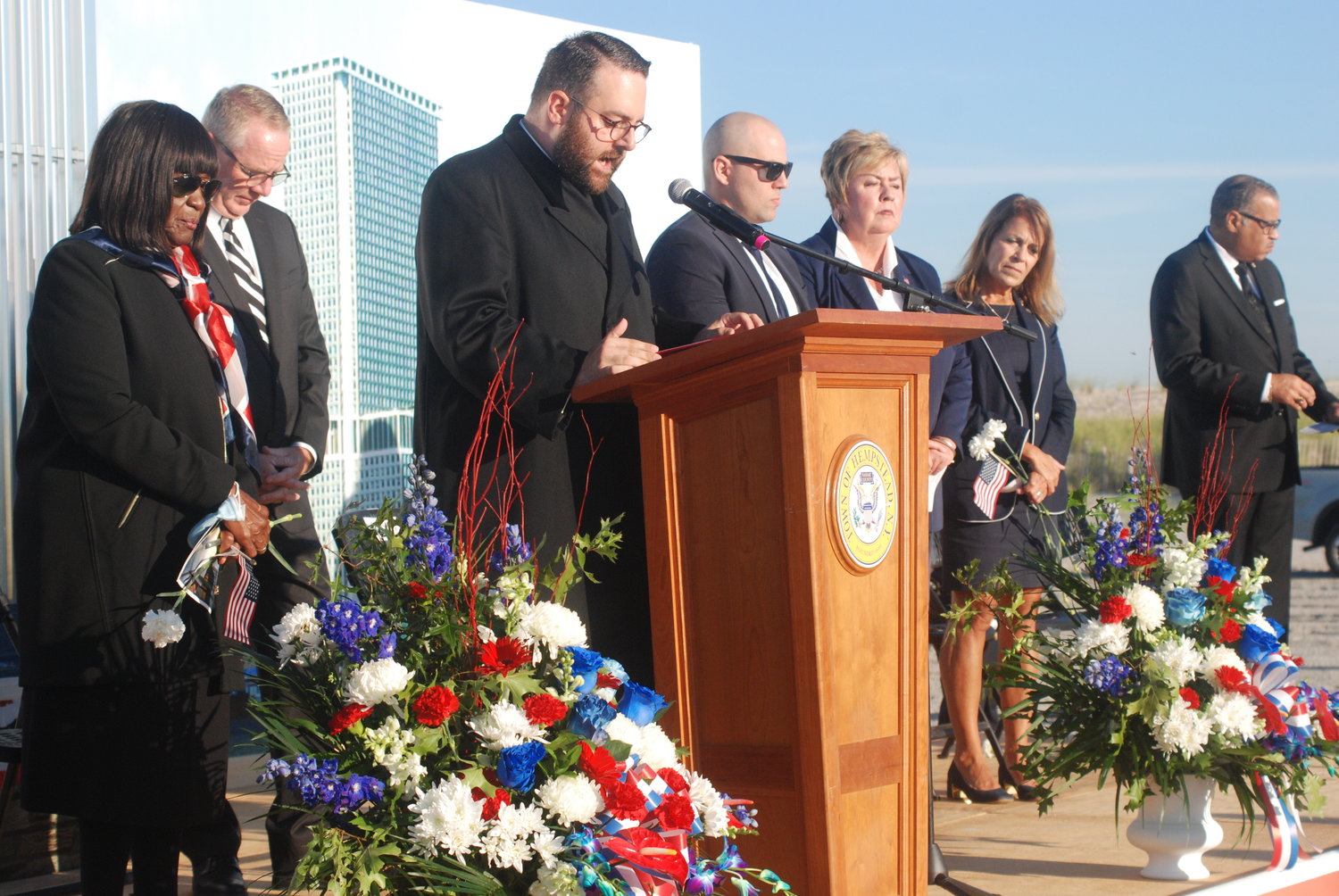 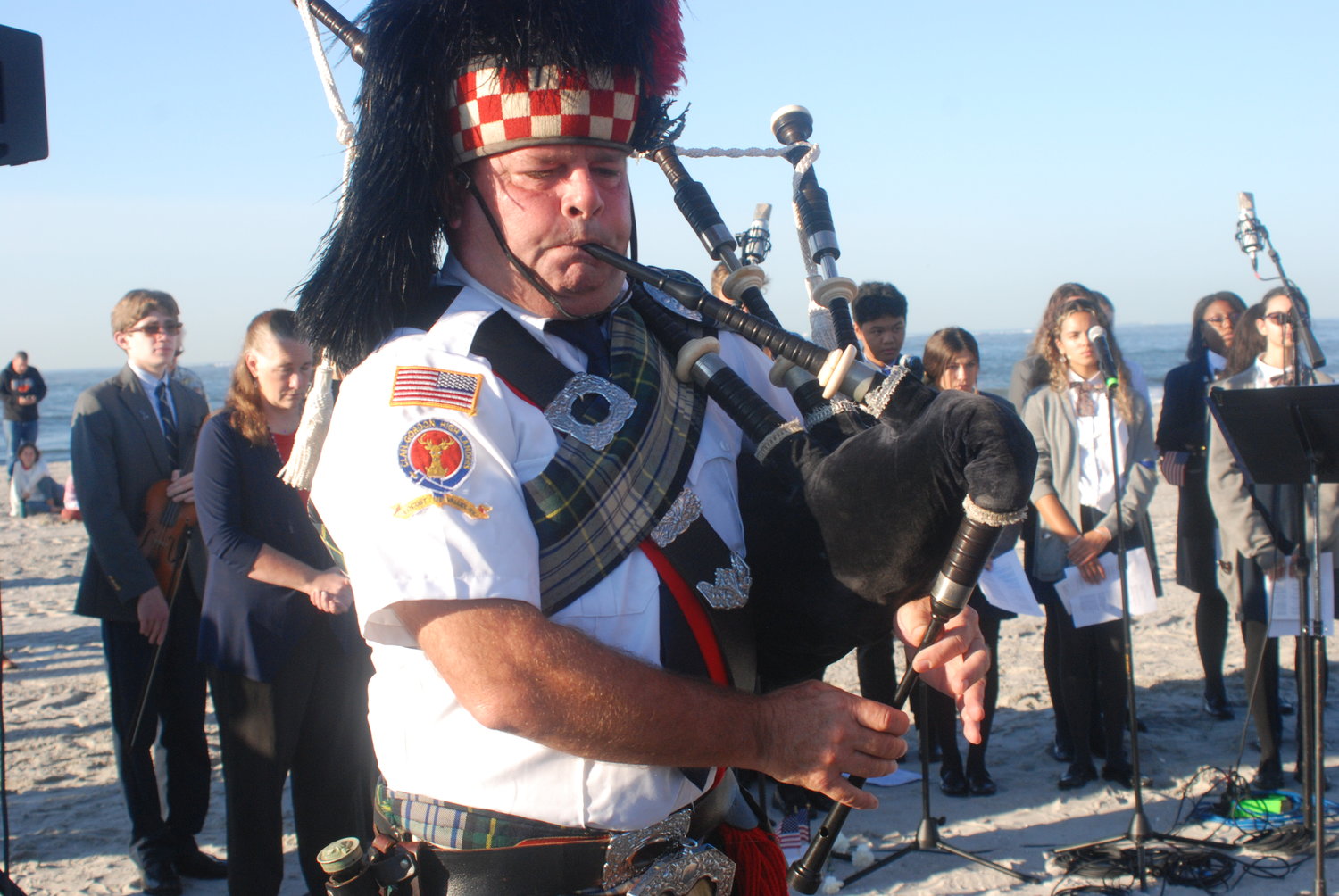 Bagpiper Charlie Armstrong, of the Clan Gordon Highlanders of Locust Valley, led the color guard during the ceremony.
Scott Brinton/Herald Two aluminum replicas of the twin towers formed the backdrop for the ceremony.
Scott Brinton/Herald 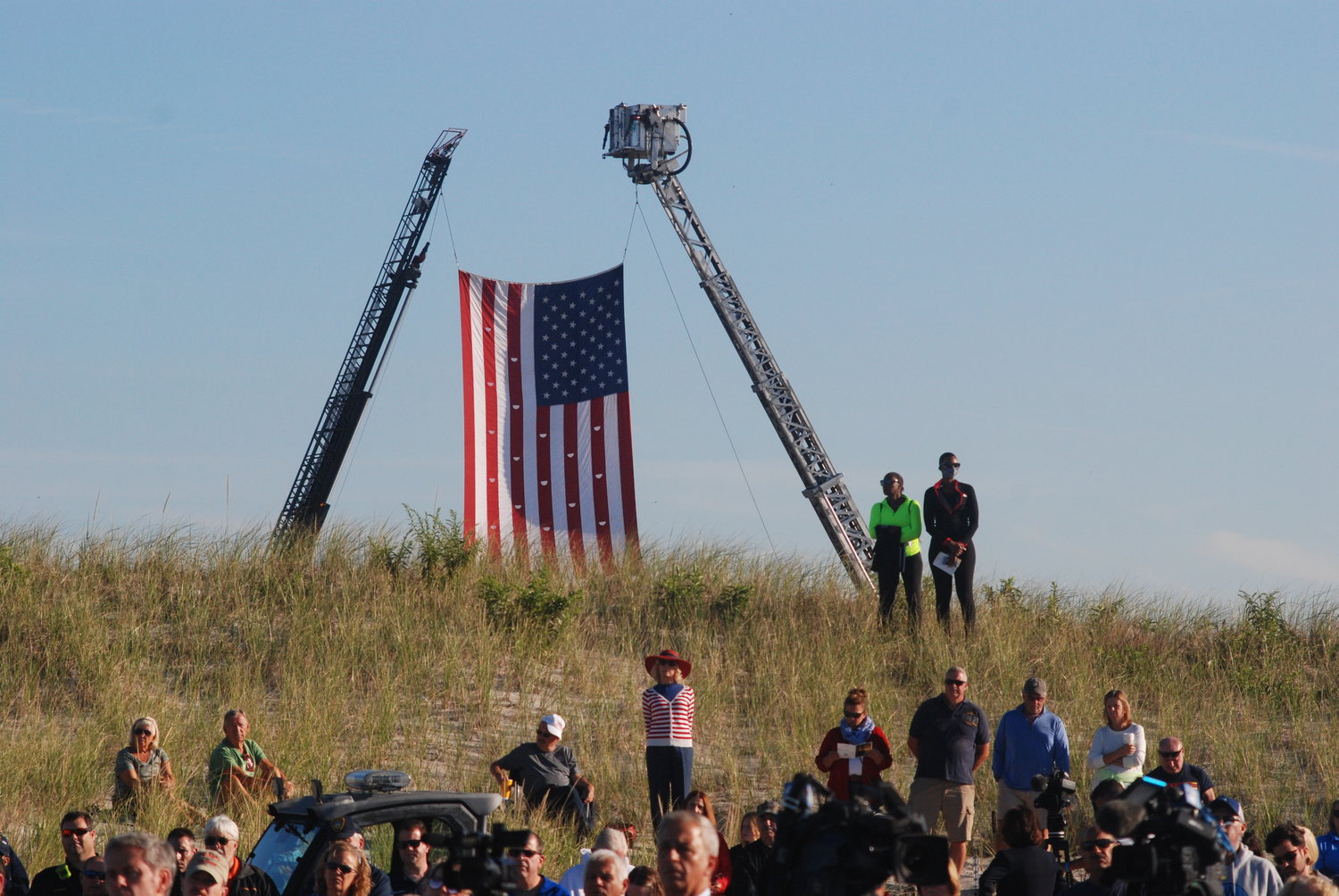 Firefighters erected a massive American flag at the entrance to the beach, under which attendees walked.
Scott Brinton/Herald 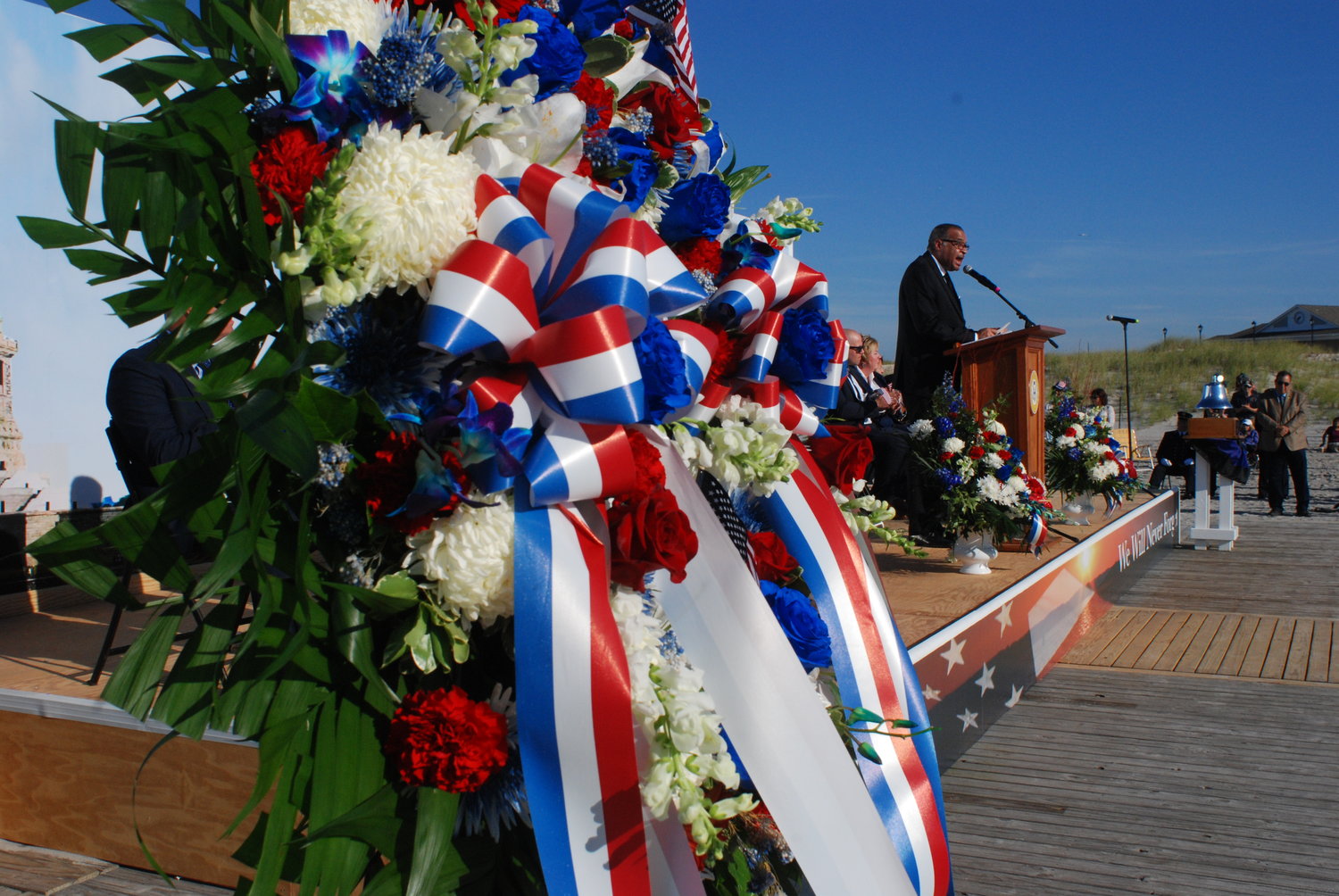 Attendees tossed white carnations into the Atlantic Ocean at the end of the ceremony in tribute to the nearly 3,000 lives that were lost in the 9/11 attacks.
Scott Brinton/Herald Attendees streaming out of the ceremony.
Scott Brinton/Herald
Previous Next

It was the day America lost its innocence.”
Marianee Taborsky, Merrick
By James Bernstein

Sept. 11, 2021, dawned as a stunningly beautiful late summer morning, the sky an azure blue and the sunshine a bright yellow — just as it was on the same day 20 years ago.

At the Hempstead Town Park at Lido Beach, there was a standing-room only crowd that gathered before a makeshift stage on the sand and also filled a wooden walkway leading from the parking lot.

The crowd, estimated by officials at about 2,000, had come to observe a milestone anniversary — the 20thyear since two commercial jetliners were hijacked by terrorists, who used them as missiles to slam into each of the twin towers of the World Trade Center, killing almost 3,000 people.

The mood on the beach was somber.

“It was the day America lost its innocence,” said Marianee Taborsky, of Merrick, who came with her husband, Kevin. They embraced before taking seats set up on the beach. She had heard reports of the attack that morning and turned on her TV.

“I couldn’t believe it,” she said. “This doesn’t happen to us. This was America.”

Speakers, including New York state’s new lieutenant governor, Brian Benjamin, a former state senator from Harlem, spoke not only about the terror of that day, but also of the sacrifice of 9/ll responders. Others, including New York City police officers and Long Island legislators, talked of losing fathers, nephews and other relatives.

“I plan on being here every year that I am lieutenant governor,” Benjamin said. His predecessor, Kathy Hochul, now governor, had spoken at the Lido Beach ceremony last year.

Some of the loudest applause of the day came for New York Police Department Detective Vincent DeMarino, whose father, also Vincent DeMarino, of Valley Stream, a deputy chief in the city police department, died of cancer after working at the ruins of the World Trade Center.

Detective DeMarino was 9 on Sept. 11, 2001. He sat in class while other students were pulled out by their parents after the attacks. When he got home, he said, his mother explained to him that two planes had hit the trade center. She told him his father was “fine.”

He said his father had been “the Energizer bunny, always busy” and chatty. “But after that day, he just sat down,” DeMarino said. In 2018, he was diagnosed with a brain tumor “directly linked to his work at ground zero,” he said. His father died 13 months later.

“He took his work at ground zero head on,” DeMarino said. “This was my dad. Share your story too.” The crowd rose to its feet.

Hempstead Town Supervisor Don Clavin noted that last year the observance was held in the Lido Beach parking lot, and the crowd was limited because of the coronavirus pandemic. This year, he said, the event could safely be held on the beach.

The 9/11 terrorist attacks “took a toll on the country,” Clavin said, but they also brought “unity and bravery.”

Many of the first-responders sat quietly. Among them was Pat Antonacci, of Levittown, an NYPD detective who said he worked at ground zero for a few months. “It was horrific,” he said.

His wife, Maryann, said, “It took a toll on him. He didn’t talk about it. He didn’t even smile for months.”

“Some people dread this day,” Blakeman said. “We know we are going to have to relive the pain and the horror of that day.” He said his nephew joined the Boy Scouts, the U.S. Army and the state court system because “the kid always liked to wear uniforms.”

“We never got to say goodbye,” Blakeman said. Only his shield was found.

At the end of the ceremony, a number of people tossed white carnations into the choppy surf of the Atlantic Ocean. One of them was Cara Donaldson, of Plainview, a psychologist.

“Throwing flowers means casting my prayers to Mother Nature and God,” she said. The pain of 9/11, she said, “never ends, even 20 years later.”