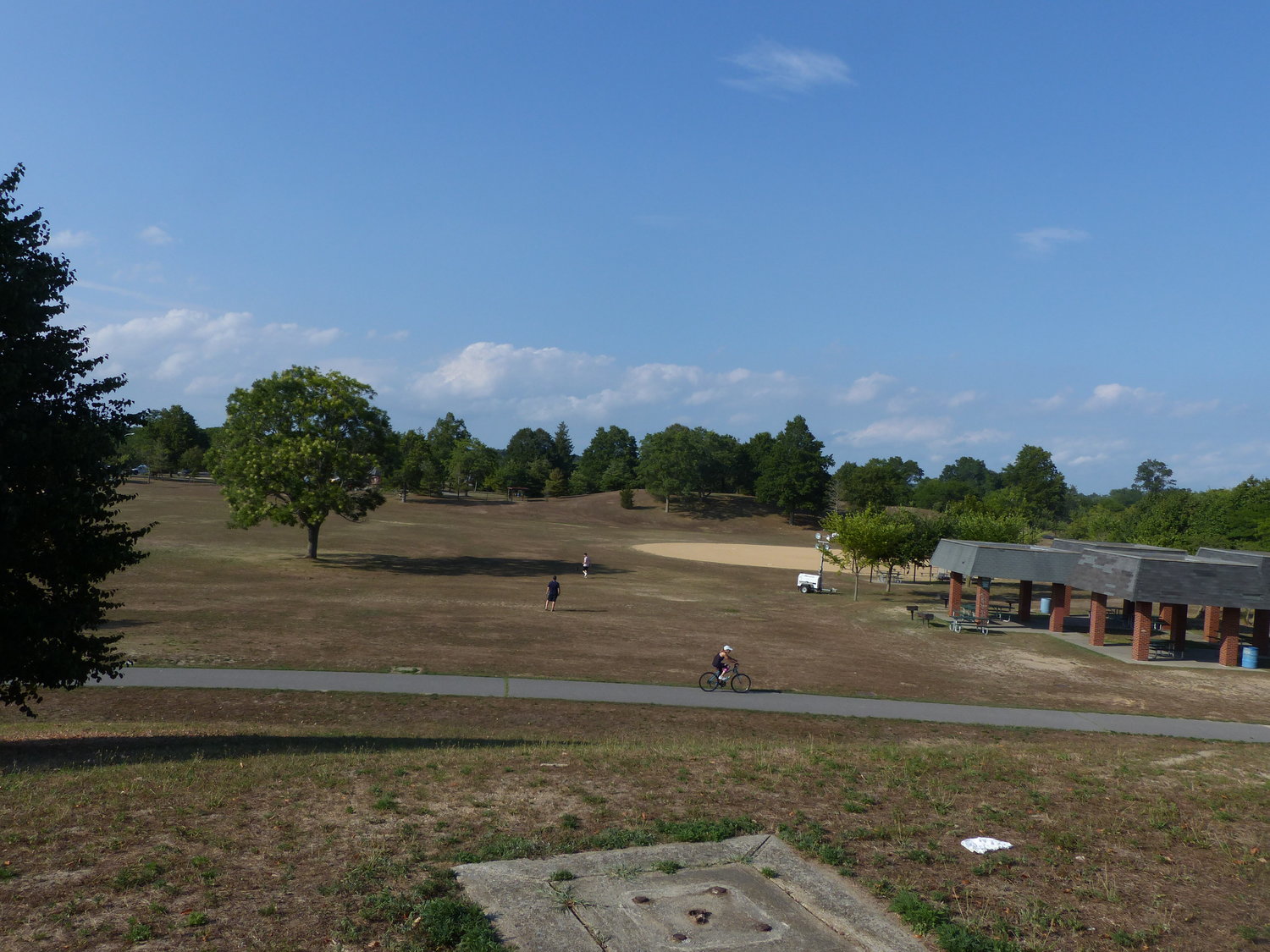 Cedar Creek Park, on Merrick Road, is the latest location on Long Island where antisemitic symbols have been found.
Michael Malaszczyk/Herald 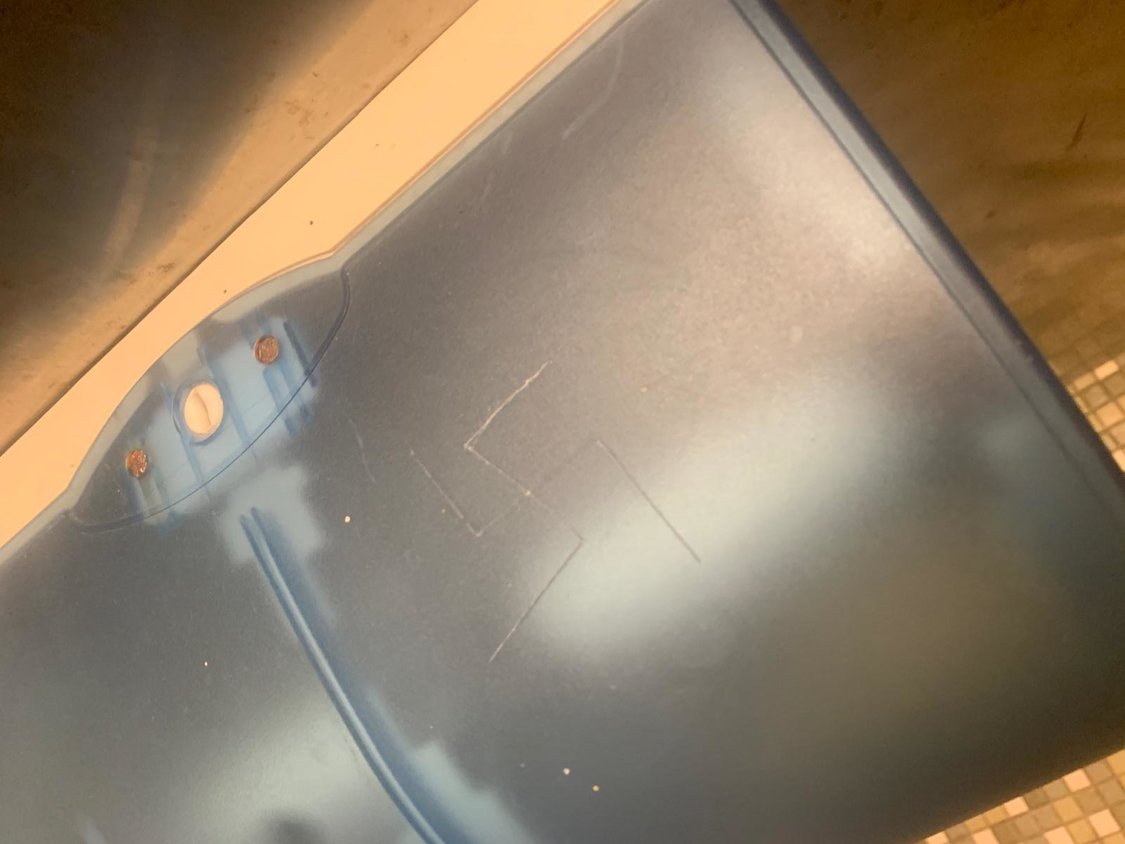 Swastikas were found on paper towel holders in the bathrooms at Cedar Creek Park.
Courtesy/Office of Anna M. Kaplan
Previous Next

We are fighting against all discrimination and fascism.”
Rev. Wasyl Hrynkiw, St. Vladimir's Ukrainian Catholic Church
By Michael Malaszczyk

Politicians, religious leaders and residents said they are united in their fight against antisemitism after swastikas were recently discovered at Cedar Creek Park in Seaford.

The swastikas were found in the park’s bathrooms on Sept. 3, clearly etched into the bathrooms’ paper towel holders, officials said.

This is not the first time that antisemitic symbols have been discovered in the Wantagh-Seaford area. In July, Max Williams, a 23-year-old Jewish resident, stumbled across antisemitic graffiti and racial epithets at Forest City Community Park in Wantagh. Swastikas and satanic symbols were found in that same park in April.

In addition, in February 2018, a swastika was found outside a woman’s house on Brent Drive, and in 2011, a swastika and hateful messages were discovered on a footbridge spanning the Wantagh Parkway from Beltagh Avenue.

Antisemitism has been on display across Long Island as well. This year, flyers were posted around Rockville Centre, Oceanside and Long Beach, promoting a conspiracy involving the Jewish members of President Biden’s cabinet. The Nassau County Legislature claimed that this was the work of the neo-Nazi group the Goyim Defense League.

Nassau County police officials said they were investigating the Cedar Creek Park incident as a bias crime. No suspects had been identified as the Herald went to press, and it was not known whether those involved had any connection to the Goyim Defense League or any other neo-Nazi organizations.

While it also remains unknown who committed the acts earlier this year at Forest City Community Park, the incidents could be connected, and could possibly be an attempt to intimidate the Jewish communities of Wantagh, Seaford and neighboring towns ahead of the Jewish High Holy Days of Rosh Hashana and Yom Kippur, officials said.

The antisemitic acts drew an immediate and harsh response from local elected officials and religious leaders. Town of Hempstead Councilman Christopher Carini condemned the hatred and suggested that instances like these could be the result of New York’s criminal justice system.

“Hate and antisemitism has no place in our society and will not be tolerated,” Carini said. “As a retired police officer, I have complete faith in the Nassau County Police Department in their investigation. Albany needs to fix our broken criminal justice system and return judicial discretion that was stripped by cashless bail.”

The Diocese of Rockville Centre, which oversees many Catholic churches in Wantagh and Seaford, also spoke out against the antisemitic acts.

“The Catholic Church condemns all forms of antisemitism as contrary to the very nature of the Catholic faith,” Sean P. Dolan, the diocese’s director of communications, said. “We stand in solidarity with the Jewish community of Long Island and urge all people to work together in rooting out any form of prejudice, hatred, and the insidiousness of antisemitism.”

Rev. Wasyl Hrynkiw of St. Vladimir’s Ukrainian Catholic Church in Uniondale described the acts at Forest City Park as “not only anti-Jewish, (but) anti-humanity,” and called the acts in Cedar Creek Park fascism.

“Millions of people died from that swastika,” Hrynkiw said, referring to the millions of Jewish as well as Romani and Slavic victims killed by the Nazis. “We are fighting against all discrimination and fascism. The people who did this must be found and punished.”

Hrynkiw also called for the media to discuss this subject more, both on television and in print, adding that people have to know the history behind the swastika, as it is not a symbol to be taken lightly.

Rabbi Moshe Weisblum of Congregation Beth Tikvah in Wantagh had harsh words for whoever committed these acts of hate.

“It is disheartening to hear, sometimes on a daily basis, about the escalation in hostile incidents against minorities, especially Jews,” Weisblum said. “We have a pivotal responsibility, individually and collectively, to denounce antisemitism and demonization of Jews, and attacks on any group based on race, religion, sexual orientation, or national origin.”

Weisblum urged members of the community to speak out against anitsemitism and not remain silent.

Rabbi Shimon Kramer of the Merrick Chabad Center, which draws members from Wantagh and Seaford, continues to take his stand against hatred. Rabbi Kramer was the victim of an antisemitic hate crime in 1994, when a man opened fire on his car, killing two passengers and injuring another.

Kramer said he feels that knowing who committed the act in Cedar Creek Park  —whether it is teenagers pulling a prank or a neo-Nazi group — is not as important as the need for the community to come together and show them that this is wrong, and that people will always choose love over hate.

“We have to condemn the hatred, of course,” Kramer said. “But I think we have to give them a message. And hopefully the message we give is one of love.”