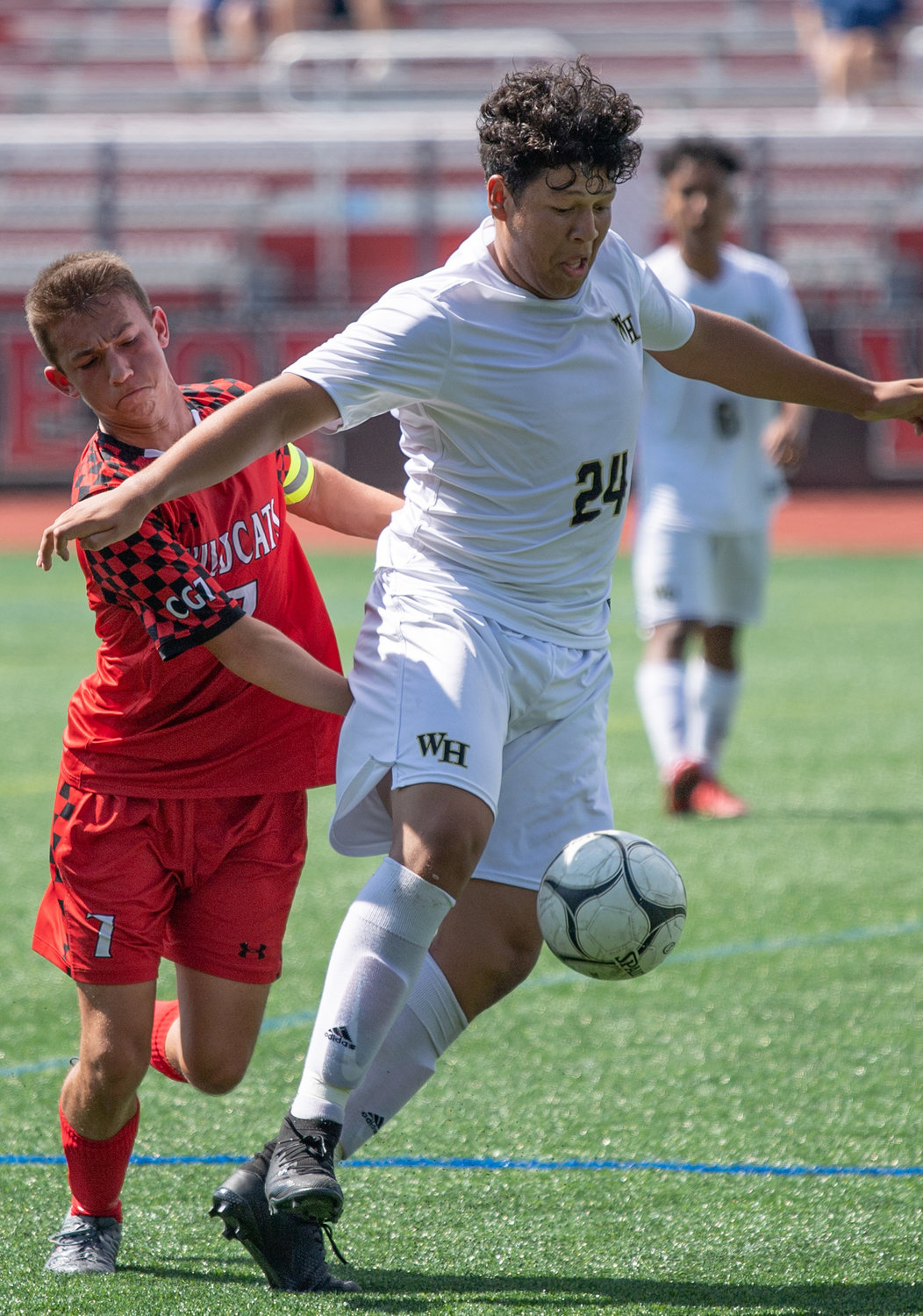 Senior Shaday Mejia, right, is an integral part of the midfield for the Rams, who completed the first half of the regular season with a 4-1-1 mark.
Media Origin Inc./Herald
By Tony Bellissimo

A little less than five months after playing for the Nassau Class B boys’ soccer title, West Hempstead capped the first half of the Conference B/C slate last Saturday with a 2-1 victory over visiting Malverne/East Rockaway.

The Rams, on the way to running their unbeaten streak to five games, got goals from seniors Kevin Decristoforo and Derek Chinchilla, with the latter netting the winner in the 70th minute on a chip shot from 25 yards out. They’re 4-1-1 after the first trip through the schedule and sit in a second-place tie with Locust Valley behind Cold Spring Harbor (5-1.)

“We’re a completely different team than last season and we’ve had a lot of young guys step up,” said coach Chris Van Kovics, who guided West Hempstead to a runner-up finish to Carle Place in Class B. “We’re not working with big numbers,” he added. “We have 14 on varsity and only 12 on JV, but we’re playing well. It’s all about defense. Our back four and keeper have been outstanding.”

Junior goalkeeper Bryan Burgess was unable to post a third straight shutout, although he made eight saves against Malverne/East Rockaway and also was credited with an assist. “Bryan’s improved so much from where he was as a freshman and where he was as a sophomore in the spring,” Van Kovics said. “He’s not only bigger and stronger, but he’s become more vocal and more of a leader. He’s physical and he’s worked on his agility.”

The Rams blanked three of their first six opponents, including a 3-0 victory over Carle Place in a rematch of the county final. However, the Frogs are now the only Class C team in Nassau and won’t be defending their crown. The top four Class B teams in the conference will qualify for the playoffs, plus anyone .500 or better.

“All I’m worried about is what’s next on our schedule,” Van Kovics said. “Cold Spring Harbor beat us 3-2 in the opener and a lot of things didn’t go our way. We hadn’t practiced on turf yet, our bus was late and we fell behind three minutes in.”

After allowing three goals to the Seahawks, West Hempstead has yielded only three during its unbeaten streak. The defense is spearheaded by Decristofono, who is 4-for-4 on penalty kicks, and juniors Kamau Leslie, Anthony Blanco and Jeremy Cruz. Senior Darrius Perreira is also contributing.

Chinchilla, who moved to forward from midfield, has forced three of the four PKs with his speed and tenacity. He’s scored three times and assisted on two others. Senior forward Felipe DaSilva has two goals.

In the midfield, senior Shaday Mejia is always on the attack and strong in the air. Juniors Diego Aguilar and Moises Gomez, along with sophomore Carlos Mejia, have risen to the occasion.

“No complaints,” Van Kovics said. “We have some huge road wins so far and we’re in a good place at the midway point.”