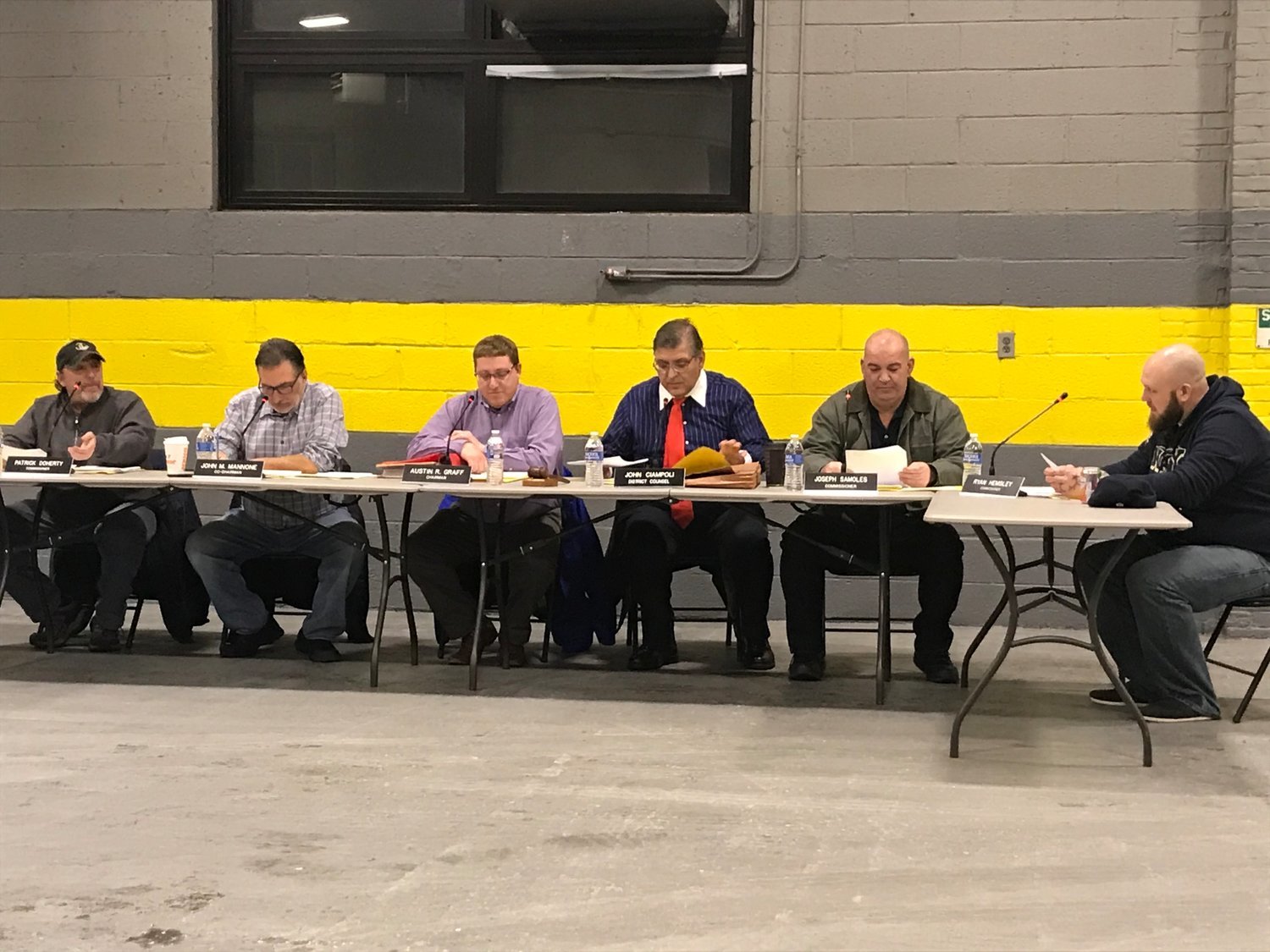 Oceanside Sanitation District No. 7 Commissioners John Mannone, second from left, and Ryan Hemsley, far right, were re-elected to their positions in a contested election on Tuesday. They remain on the board, which comprises, from left, Commissioner Pat Doherty, Chairman Austin Graff and Commissioner Joe Samoles, second from right. Also pictured is attorney John Ciampoli, third from right.
Mike Smollins/Herald
By Mike Smollins

After a contentious race for two seats on the Oceanside Sanitation District No. 7 Board of Commissioners, John Mannone and Ryan Hemsley retained their seats when votes were counted Sept. 15.

Mannone, who had 784 votes, defeated challenger Nancy Baxter (597) for a five-year term, while Hemsley (1,036) overcame Dawn Veit (141) for a two-year term. Mannone will begin his second five-year term on the board, having been elected for the first time in 2015, while Hemsley will complete the final two years of commissioner Matthew Horowitz’s term after Horowitz stepped down from the board in January, citing conflicts with his job. Because Hemsley assumed office in the middle of the term, he had to run in order to finish it. He can then opt to run for a five-year term.

Mannone, an attorney, said he was pleased that voters supported him, and described Baxter as formidable, noting that she had solid ideas and the backing of many important people in Oceanside, including school board members and community group leaders.

“It really was a validation for the work I’ve done in the last five years,” Mannone said, “but credit has to go to all the people. It was just an incredible showing of regular people coming out and supporting a guy that’s been behind this community as a regular guy. I can’t even express my gratitude to all the people.”

Hemsley, a sheet metal worker in Queens and a member of Local Union 28, also expressed his appreciation for those who showed support. “I would like to thank the sanitation workers, the community, my friends, family and my sheet metal union Local 28 for coming out to vote,” he said.

Like most sanitation district elections, the race was heated on Facebook, and the incumbents said they were ready to move ahead and put the political warfare behind them. Baxter, who is a member of Oceanside Kiwanis and works in the Oceanside School District’s after-school program, and Veit, a bookkeeper, each ran for the first time.

The polling place was sanitation headquarters on Mott Street, and Board of Elections representatives attended to ensure the election went smoothly. Because of the coronavirus pandemic, the number of people allowed in at a time was limited, masks were required, and social-distancing protocols were enforced.

Mannone said his goals going forward include continuing to cut taxpayer costs and fight corruption, and noted that the board has fixed many issues since he first ran in 2015.

“The times have definitely changed, and now Oceanside is coming out and voting for me, and now I’m pledging to continue to lower their taxes and continue to improve the service there,” he said. “. . . We inherited a district that vastly overtaxed the taxpayers for a long time. One of the goals is taking a little bit of that money and gradually putting it back to hold the taxes, and we’re going to continue that process.”

Hemsley said he ran again because he wanted to continue to make a difference.

“My goal in the future is to keep the workers healthy, just like we did during the pandemic, to keep everything in motion and to look out for the community as much as possible,” he said, “and to be as transparent as possible on the board.”

Board of Commissioners Chairman Austin Graff said that with election season over, the board would now look toward new projects, such as purchasing recycling pails to distribute to the community. Graff said the commissioners are sending bids out and will look for “the best and least expensive” option to purchase and distribute the cans to the entire community, one new pail per household. He added that the current recycling cans date back to the 1980s and have not been replaced in decades, despite many of them being broken or lost through the years.

Graff also said that the district has a fund balance of more than $5 million because, he said, past administrations overtaxed the community. He said the department is working toward using part of that balance to fund the new community-wide pails and continue to reduce its budget and cut taxes.

“We’re going to continue to provide great service to the community,” Graff said, “while keeping the taxes low.”

In keeping with that, the commissioners are waiting on the Town of Hempstead Board to approve the district’s $8.9 million 2021 budget, which will include a 1 percent tax cut for the community. Graff said he was hopeful that would happen by October.

As far as the election, Graff said he was pleased to continue to work with Mannone and Hemsley, and said that together with Commissioners Pat Doherty and Joe Samoles, they make a team. He said the commissioners were particularly united during the height of the pandemic, when they worked together to ensure that trucks and headquarters were deep-cleaned regularly. There was one positive Covid-19 case early on, Graff noted, but the commissioners and employees were careful to contain it.

“The most important things to keep the workers safe, keep Oceanside clean and do what we’re supposed to do,” he said, “Keep the garbage out of Oceanside.”