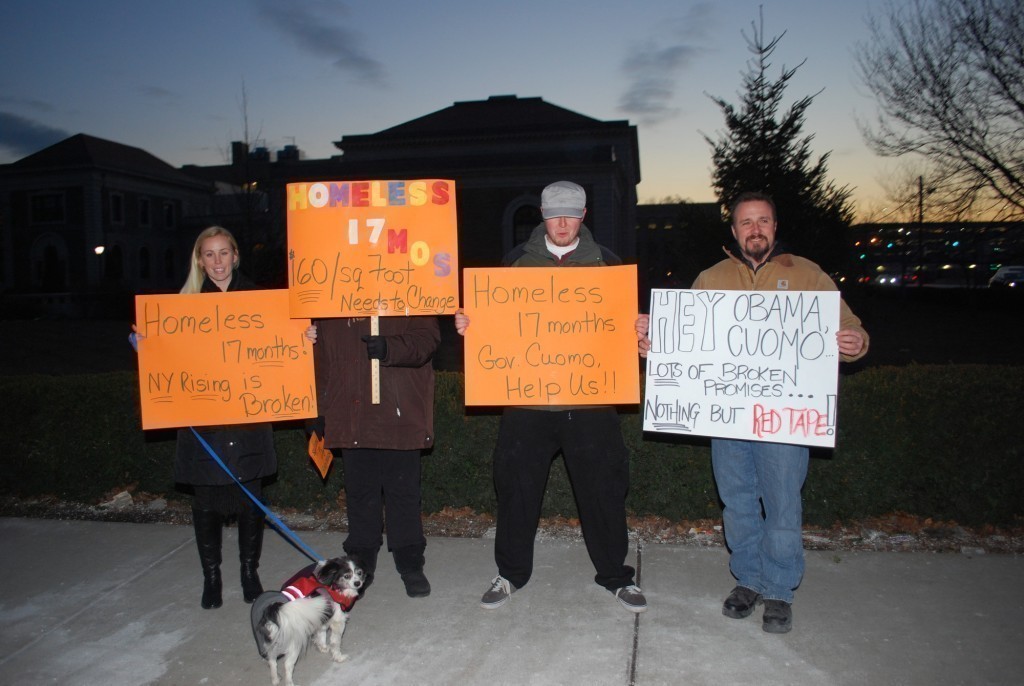 “I’m pissed — I worked three jobs my whole life, and I’m spending my kids’ college funds keeping this afloat,” said Robert Wright, a recently retired New York City firefighter from Island Park. “It really burns me up that here I am, doing the right thing — paying my taxes, working for a living, saving for college — and because of Hurricane Sandy, I’m going to be bankrupt. I just don’t think it’s fair.”

The first floor of Wright’s house remains gutted almost a year and a half after Sandy hit. After years of paying into a $250,000 flood insurance policy, he was given only $30,000 to repair and elevate his heavily damaged home. Almost a year into the NY Rising storm grant program, it has yet to determine if Wright is even eligible for funding. And he is far from alone. A handful of Sandy victims — their tagline “Homeless with a mortgage” — rallied outside the Theodore Roosevelt Executive and Legislative Building in Mineola on March 5, ahead of a public-comment meeting held by the state.

The Governor’s Office of Storm Recovery, the state agency in charge of managing and distributing aid to victims of Hurricane Sandy and Tropical Storms Irene and Lee, hosted the meeting, a condition of the $2.1 billion of Community Development Block Grant money it was allocated last November by the U.S. Department of Housing and Urban Development. This second appropriation of Sandy aid money, bringing the total in CDBG funds awarded to New York to $3.8 billion, was meant to help continue to fund the state’s ongoing recovery programs for home and business owners as well as municipalities.

Though an agency representative was on hand, the meeting was not intended to clarify the program or provide answers to people who have been struggling to make progress in the NY Rising program for almost a year. Rather, it was an opportunity for those people to have their opinions, suggestions and problems with the program formally recorded, and eventually responded to in the final draft of the state’s action plan, the proposal it is required to submit to HUD detailing how it will spend the aid money.