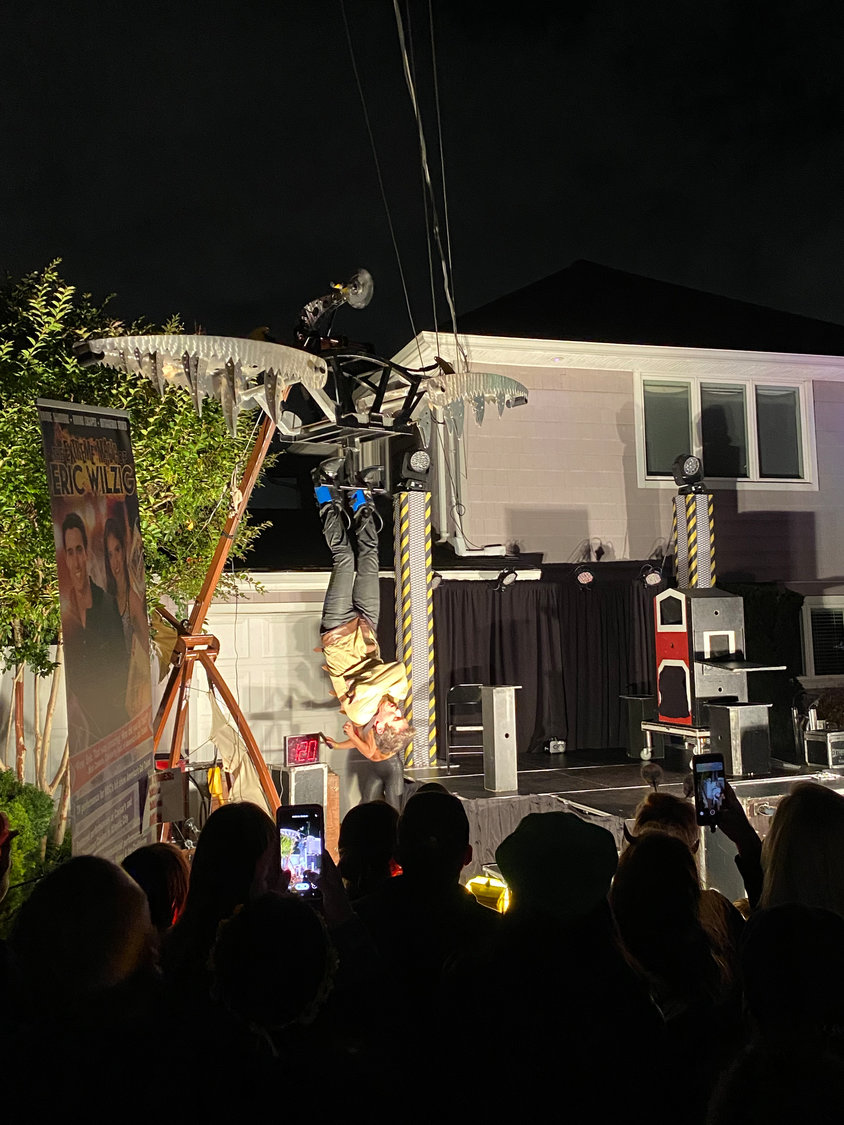 Magician Eric Wilzig escaped from a strait jacket and metal jaws before a huge crowd in front of his Oceanside home.
Tom Carrozza/Herald 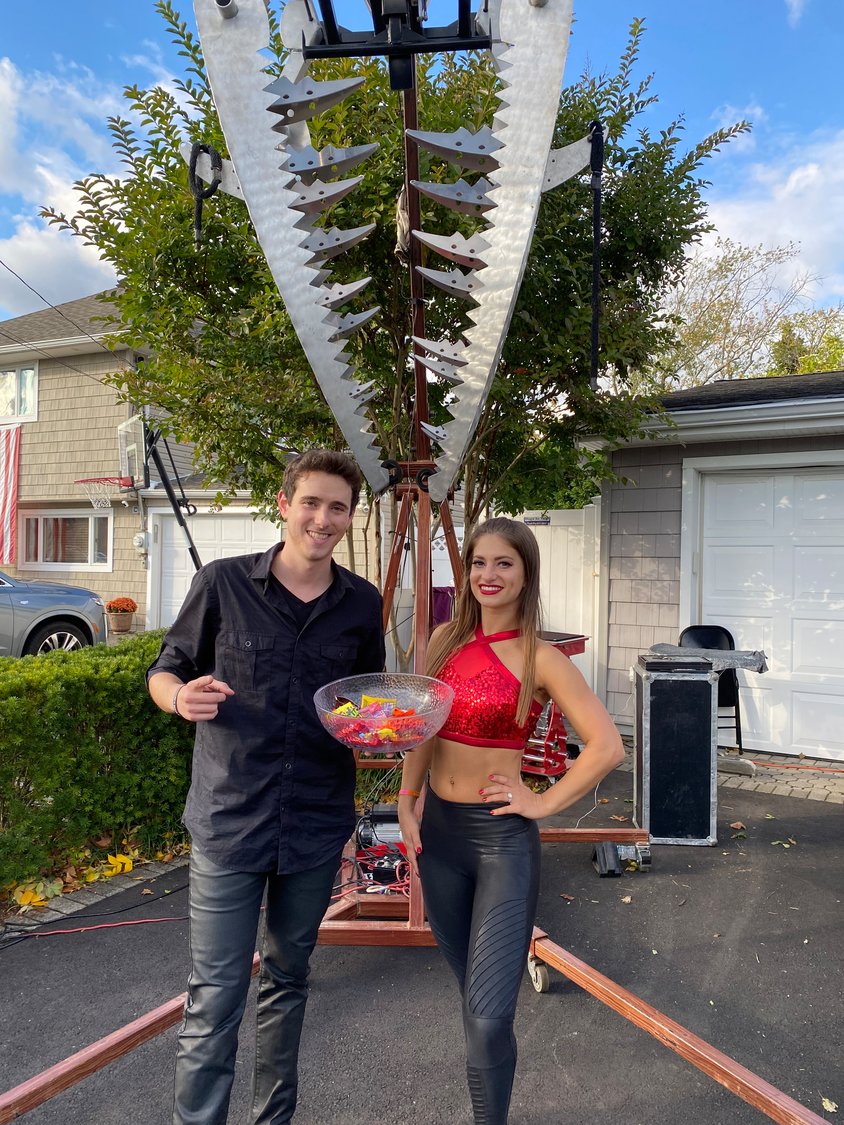 Husband and wife duo Eric and Eliana Wilzig in front of the giant, metal jaws that the former escapes from.
Tom Carrozza/Herald 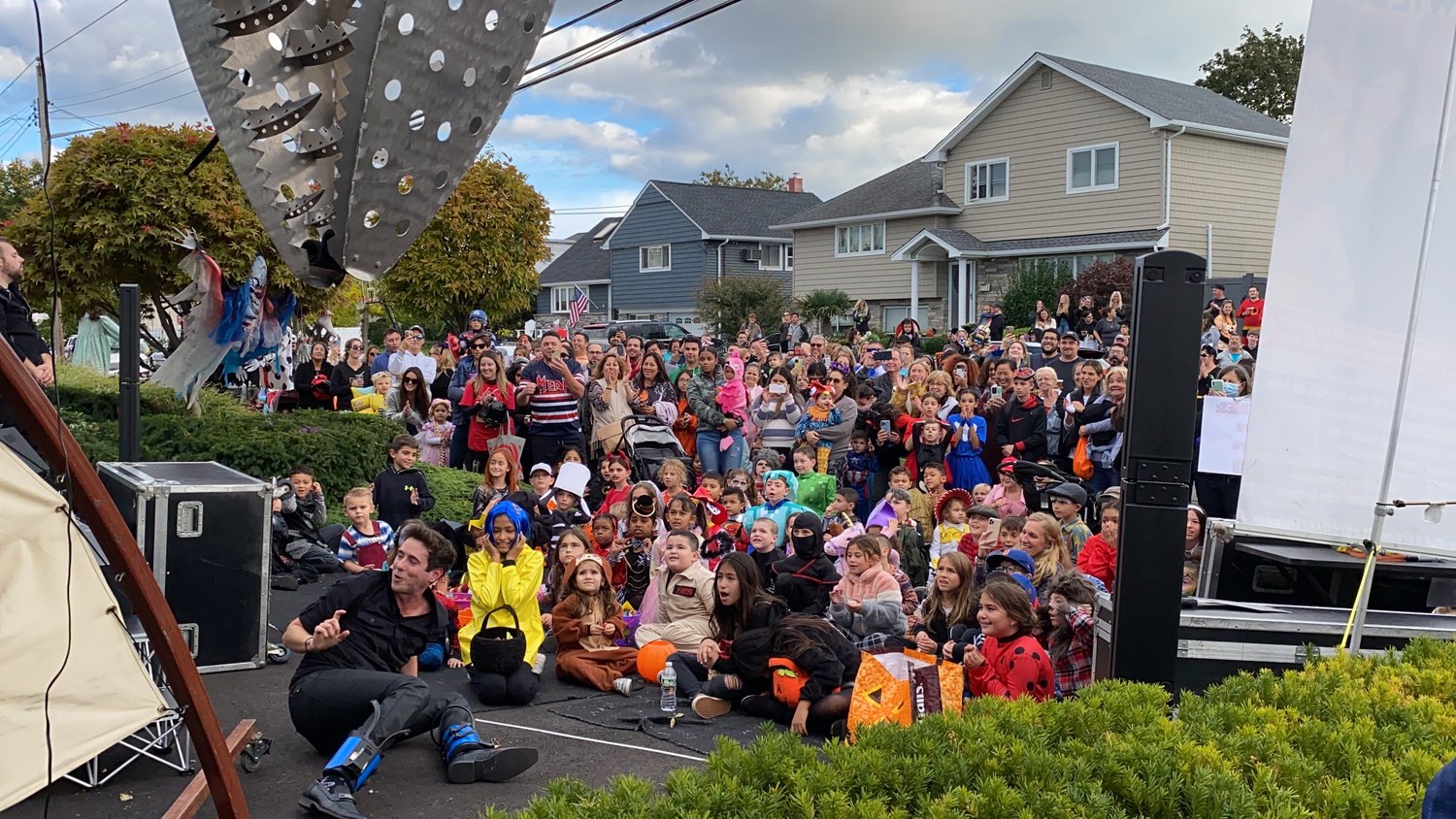 Wilzig moments after his escape.
Tom Carrozza/Herald
Previous Next

It's certainly scary. I've been getting out of strait jackets since I was five years old.”
Eric Wilzig, magician/illusionist
By Tom Carrozza tjcarrozza@liherald.com

On Halloween, Oceanside was treated to a few tricks by local magician Eric Wilzig in front of his home on East Lexington Avenue. On a stage constructed in his driveway, Wilzig and his wife and performing partner Eliana Wilzig, 27, put on a show filled with illusions, humor and even a death-defying stunt for his neighbors.

The duo put on three shows on Sunday, capping off the day with an evening production that saw show-goers pack their driveway and neighbors’ front lawns. The free event accepted donations for the Leukemia and Lymphoma Society, where all of the funds raised will go. Wilzig said he was inspired to work with that charity because he has had family members battle the diseases.

Wilzig was excited to bring his grand act to the suburbs, especially his escape act while suspended in the air in a strait jacket between jagged, metal jaws that crash together violently mere seconds after his escape. “It’s certainly scary. I’ve been getting out of strait jackets since I was 5 years old,” Eric said. “My parents weren’t super-thrilled.”

The Wilzigs and their team worked from 8 a.m. to 7 p.m. assembling the stage and performing the three shows. “It’s hours and hours of set up, but once you see everyone show up and the reaction, it’s well worth it,” Eliana said.

The show came together quickly, with the Wilzigs only announcing the shows on Friday because of concern whether it would rain. Neighbor Jason Strumwasser helped to get the word out about the shows and welcomed people to his front lawn across from the stage to watch each show. “This is what we needed after Covid,” Strumwasser said. “After 20 months of craziness, this was a nice way to kind of feel normal again.”

WIlzig, 29, said magic entered his life when he was 5 and his father bought him a coin trick kit. He came up with his show’s name – The Extreme Magic of Eric – when he was 12, capturing the tone of the gasp-inducing production, which sees the Woodmere native emulate David Copperfield, Criss Angel and Harry Houdini’s escape acts.

Eric and Eliana perform magic full-time, including appearances on “America’s Got Talent” and “The Tonight Show with Jimmy Fallon,” headline acts at Madison Square Garden and Caesars Hotel and Casino, and international shows in Europe, Canada and the Caribbean. During the pandemic, they have done mostly virtual shows.

The Wilzigs moved to Oceanside in late 2018 not long before they were married. Eric did a magic trick to get Eliana’s phone number while she was visiting New York from her native Israel.