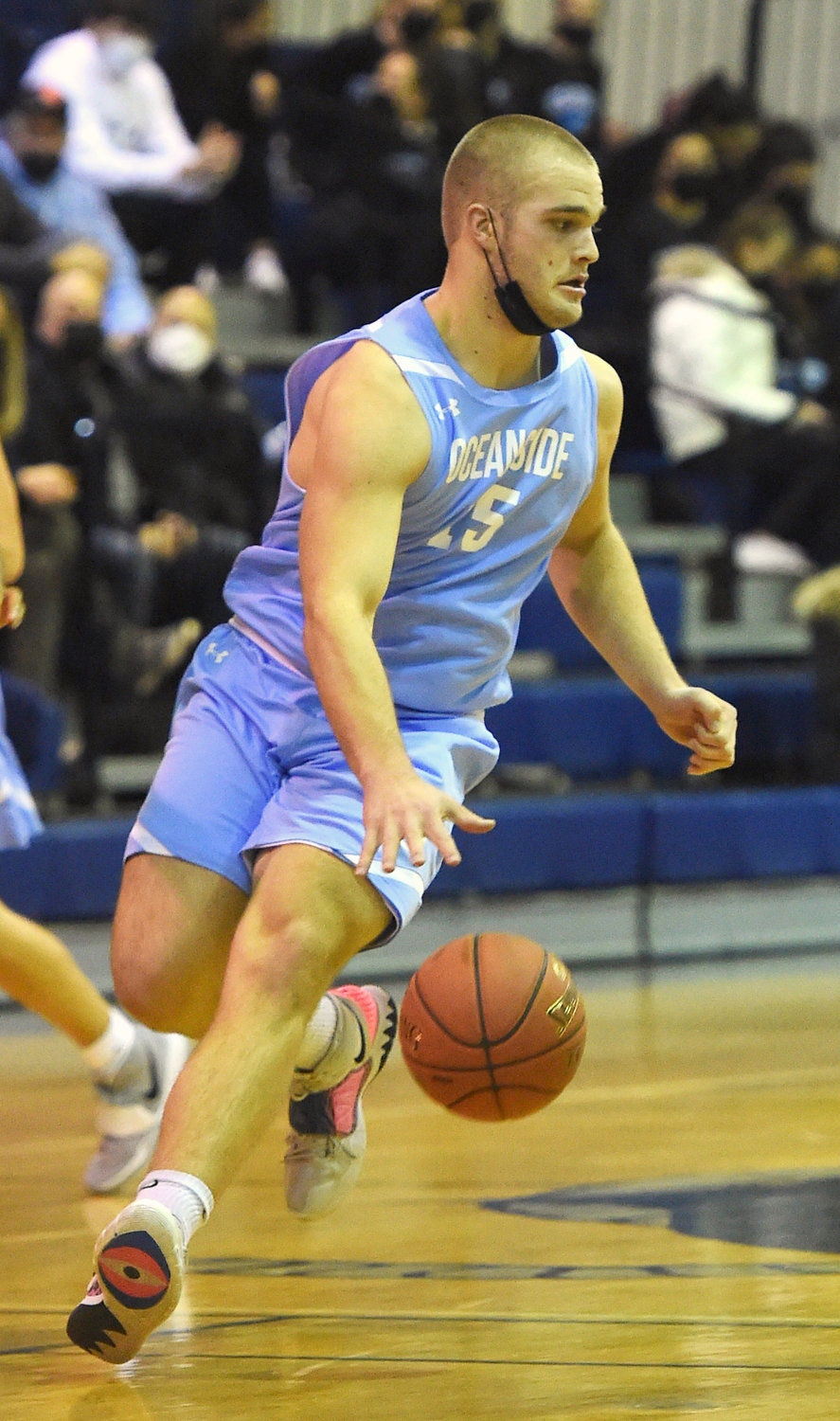 The Oceanside boys’ basketball team was the last man standing in a hard-nosed, grueling matchup with Uniondale, as the Sailors walked away with a 55-51 home victory on Jan. 11.
The low-scoring output and gradual pace is exactly how Oceanside head coach Ed Risener wanted to attack this game.
“We won playing our style of basketball,” Risener said. “We forced Uniondale to play our style, as we didn’t want to run up and down the court and made them play to our tempo.”
The score reflected the controlled pace, as the Sailors held Uniondale to just 30 points through the first 24 minutes. The team was able to withstand any runs Uniondale was able to make, as the Sailors maintained a 6-to-10 point lead for nearly the entirety of the fourth quarter. The team was able to clinch the game at the foul line, as the hosts went 7 for 8 from the stripe in the final quarter.
Junior Logan Lyson had 17 points and 15 rebounds. Junior Jacob Raphan scored 16 points, and also added 4 assists. Senior Liam Hannon was a mainstay on the boards, registering 10 rebounds.


As of now, treading through the COVID complications that have plagued all rosters alike has been the main issue for the Sailors.
“Overall, this season we’ve been battling injuries and COVID,” Risener said. “Three of our starters were out early with COVID issues and that was before we could reschedule so we played three games with JV guys.”
A positive aspect of the unfortunate confluence of circumstances has been the elevated roles of some who were not projected to handle heavy minutes. Sophomores Connor Haufler and Adam Elbehiry have stepped up admirably with the notable absences and have shown good flashes.
Heading into this week’s action, the Sailors are 5-5 overall on the season, and 3-2 in conference AA-1 play. They’ve been playing solid as of late, winning two of its past three. Considering the consolidations, the team has been forced to make in the early season, there is room for optimism regarding the second half.
“We’ve really only had our full team for the past three games, so we’re finally starting to get into a rhythm which has been good,” Risener said.
What’s been maybe most impressive about the Sailors output up to this point is how unselfish they’ve been on the offensive side of the floor. Lyson does lead the team with 11 points per game, but the Sailors have a cluster of rotation members who average between 8 and 10 points per game, including, Raphan, Hannon and junior Anthony Rodriguez. It’s a representation of a team with a multitude of scoring options and as Risener stated, “it could be a different guy every night.”
Prior to defeating Uniondale, the Sailors rallied from a five-point halftime deficit to knock off Hempstead, 47-44, behind 15 points from Rodriguez, 12 from Lyson, and 9 from Hannon.
Oceanside travels to Freeport this Friday for a 7 p.m. tipoff.