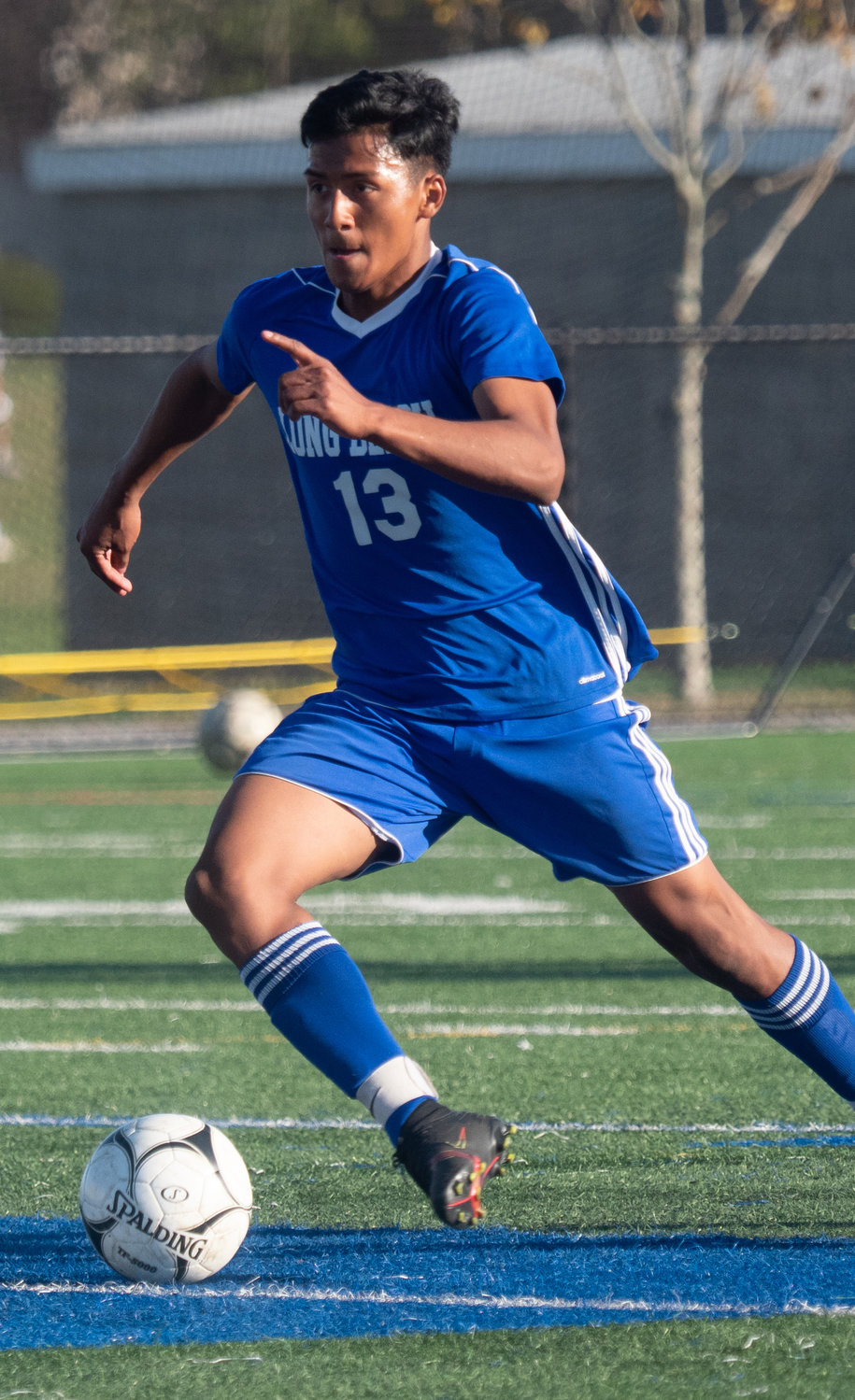 Senior Anthony Camas' efforts were a big reason why the Marines upset top-seeded South Side in a wild Nassau Class A playoff match last Friday.
Eric Dunetz/Herald
By Brian Kacharaba

Anybody who watched the Long Beach boys’ soccer team play down the stretch of the regular season wouldn’t have given them much of a chance in the postseason. The Marines didn’t score in any of their last four games and dropped to fourth in the conference to earn a No. 16 seed

Their fortunes would soon change in dramatic fashion.

In a span of three days, Long Beach went from also-rans to putting together a Cinderella run in the Nassau Class A playoffs after beating No. 17 Kennedy 3-0 on Oct. 20 and then shocking top-seeded South Side 3-2 in a thrilling shootout last Friday to advance to the Round of 16.

“Today, we played like we played in the beginning of the season,” Long Beach coach Leo Palacio said after that game. “We focused on scoring the last two days, getting the ball to the outside and get it back in. And that’s exactly how we scored today.”

Long Beach controlled the game throughout, and the defense limited Kennedy to just four shots on goal. Corbett’s goal was the Marines’ first since a 2-1 win over Great Neck North on Oct. 2.

“We’ve all been missing celebrating with the team when we score,” Corbett said afterwards. “We haven’t in a while, so that goal really meant a lot for everyone.”

But the best was yet to come.

Last Friday, Long Beach had a 2-1 lead with five minutes remaining on goals by Anthony Camas and Ryan Kalb before South Side tied it on a penalty kick. The game remained scoreless through two overtime periods, sending the match into a shootout.

Michael Contreras, Arthur Quezada, and Ryder Moore-Lukaszewski scored on their penalty kicks and goalkeeper Avie Mann made two huge saves during the session, which was tied 3-3 heading into the fifth and final shooter spot for the Marines. Because of injuries, Palacio had to decide who will take that shot and one of his players was convincing enough to be the unusual selection...Mann.

“After that confidence he had and the way he said it and the way he played in that game, I said, ‘You’ve got the fifth penalty,’” Palacio recalled the next day.

Mann, who helped Long Beach reach the shootout with two more clutch saves in overtime, backed up his plea by blasting the ball into the right side of the net, sending his teammates into a frenzy and leaving the Cyclone players and their home crowd gasping in shock.

“All week, I’ve had him shoot in that goal taking penalties, but for fun,” Palacio said. “But he made every single one in practice. And he scored for the win.”

Palacio said the win will be long remembered.