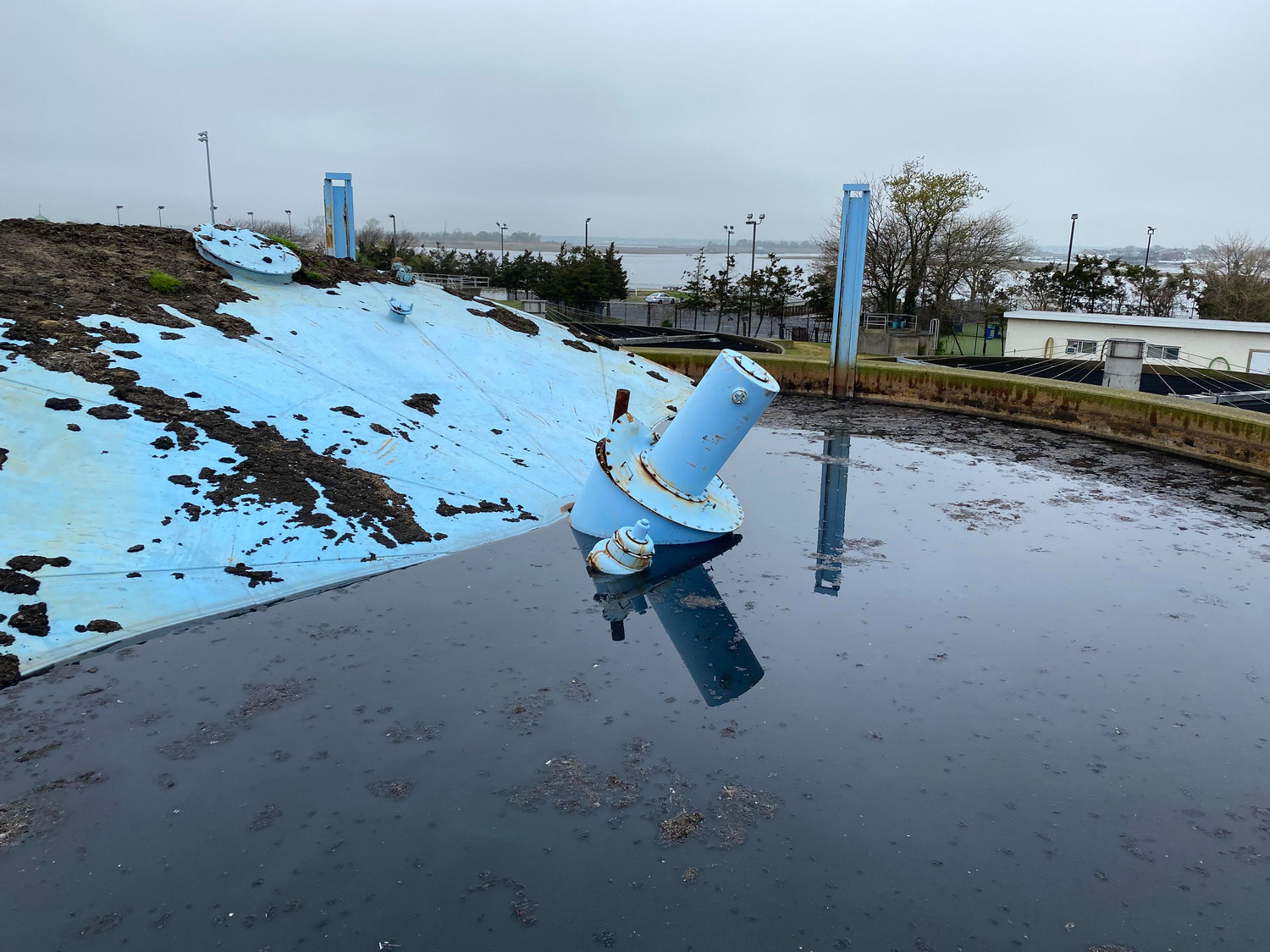 A key part of the Wastewater treatment plant is in need of repair.
Courtesy City of Long Beach
By James Bernstein

Long Beach’s public works commissioner said that a secondary digester – a key component of the Waste Water Treatment Plant-  has abruptly “tilted” and must be repaired, a situation he described as an “emergency,” requiring the city to spend $25,000 a week to temporarily haul undigested sludge to a site in New Jersey.

Commissioner Joe Febrizio told the City Council at its regular meeting Tuesday night that the digester “tilted at a 45 degree angle.”

The council approved emergency spending to have the waste trucked away. Febrizio said he has hired a waste firm, Tully Environmental, under a six-month contract.

There is discussion underway to haul the waste to Nassau County’s sewage treatment plant at Bay Park.

Secondary digesters process and break down waste materials. Solid wastes break down and settle out into a liquid. That process cannot now be done because of the failed part.

The council also approved a motion to borrow about $2 million in regard to the plant - $1 million to remove the 60,000-pound digester cover, and clean and drain the tank and $600,00 for the for temporary hauling of the sludge.

Councilwoman Liz Treston said she did not like the idea of borrowing, but that “This is an emergency and it has to be done.”

Eileen Hession, a resident and regular council-goer, asked when the city will have a permanent solution to the issue.

“We will have answers in a month or so,” Febrizio said.

City officials said the malfunction does not present a health hazard to residents.

The resident family plan will jump nearly 27 percent, to $115. The cost for non-resident families rises 20 percent to $225.

Beach passes were to go on sale Saturday, but John McNally, a city spokesman, said there will be a delay due to supply-chain issues. Such issues have been plaguing the delivery of goods across the country. McNally said passes will go on sale about mid-May.

Councilmember Roy Lester said he did not understand how the Ocean Beach Park could cost $5 million per year. He said he had repeatedly asked for answers, but never received them.

City Council President Karen McInnis took issue with Lester’s comment, saying the figures for the beach have been gone over a number of times. McInnis recommended – and the council agreed – to establish a subcommittee to study aspects of the beach, including fees. The subcommittee’s members will include Council members Tina Posterli, Lester and McInnis.

The council also held a public hearing on the proposed city budget.

City Comptroller Inna Reznik pointed out that, of every dollar spent, 57 cents goes to the school district, 18 cents to Nassau County, and 25 cents to Long Beach.

Only one person, Hession, spoke. She said salaries of some city employees are proposed to rise 10 percent.

“The average raise (among non-city workers) is about 3 percent,” Hession said. “Many of us have not gotten any raise at all.”

McInnis said she was not surprised more people did not comment on the budget, since, she said, turnouts for such hearings are historically low. She, however, she is “hopes” for a larger turnout May 17.