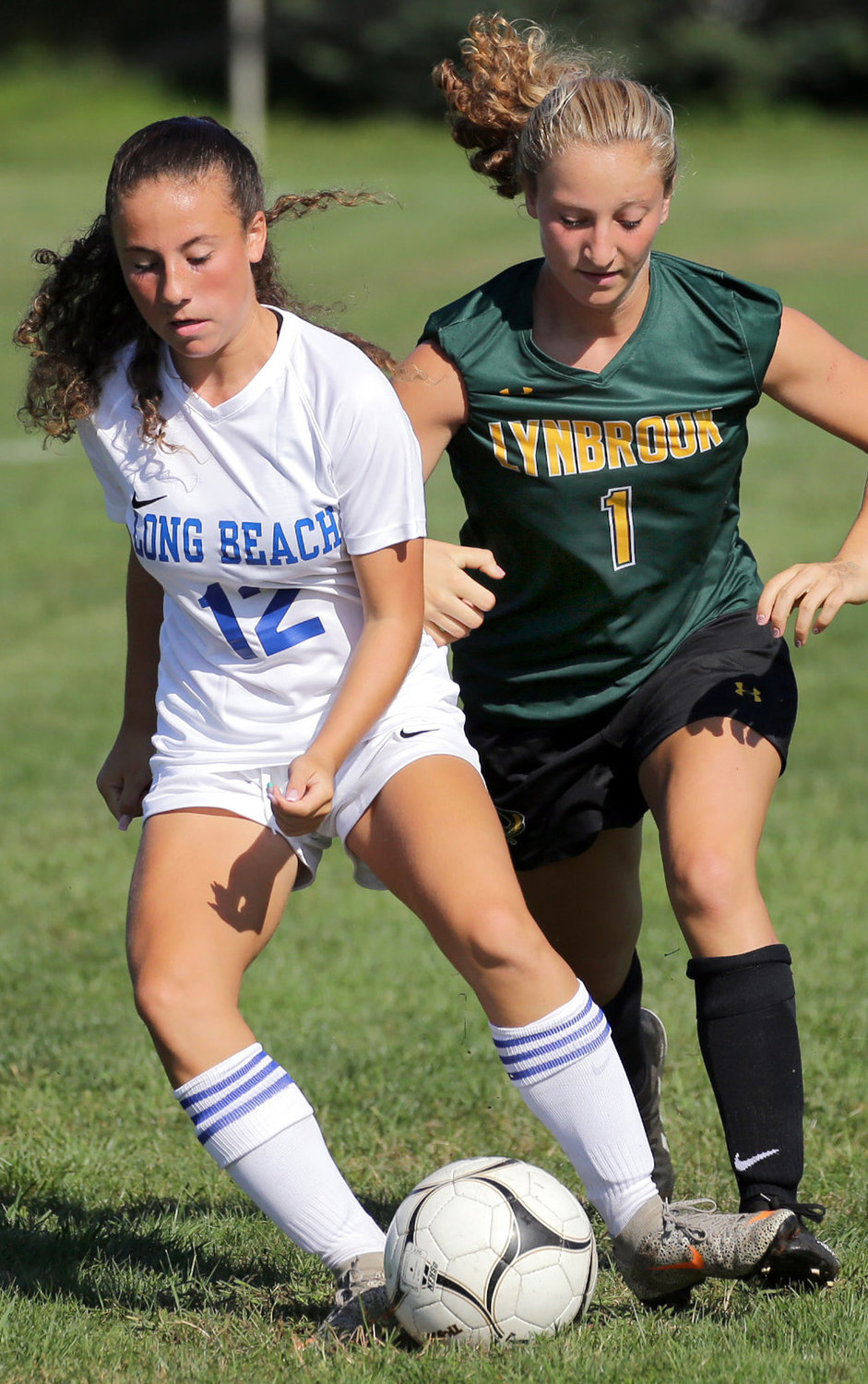 Eighth-grader Ava Kolb, left, contributed a couple of goals and 7 assists to help the Marines reach the playoffs and pull an upset over Friends Academy.
Brian Ballweg/Herald
By Brian Kacharaba

In a lot of ways, the Long Beach girls’ soccer team’s season mirrored that of their boy counterparts. Both started off strong, struggled down the stretch, made the playoffs and had a thrilling shootout win over a favored opponent after getting there.

The Marines’ 3-0-2 start seemed to be business as usual for the girls’ team that went 12-0 last spring, but a likely playoff appearance was in jeopardy after a 1-5-1 slump that dropped Long Beach in the Conference A3 standings. The team still controlled their own destiny but would need help from other teams if they lost the season finale.

Facing winless Island Trees on Oct. 15 seemed to be the perfect tonic for Long Beach, but the teams were tied 1-1 at intermission. The Marines recovered and scored four times the rest of the way for a 5-1 win. Samantha Kolb had three goals and two assists and Samantha Addeo and Sophia Roa also scored for the Marines, who finished in fourth place at 5-5-3.

“Basically, all that was said to them was, ‘You control your own destiny. Whatever you do in the next 45 minutes is up to you,’” coach Ashley Castanio recalled at halftime. “They worked together and got it done.”

Five days later, No. 18 Long Beach opened the Nassau Class A playoffs against No. 15 Friends Academy, the team that swept them in the regular season. Neither team scored in regulation and the first overtime period, but senior Samantha Addeo finished off a crossing pass from eighth grader Ava Kolb with just under three minutes remaining in the second extra session to put the Marines on the board.

But the lead was short-lived as Friends scored off a corner kick about a minute later to tie the game. Two five-minute “Golden Goal” periods also didn’t decide the match, so it went to penalty kicks.

Both teams converted four of their first five attempts, with Aysu Unver, Ava Kolb, Addeo and Samantha Kolb scoring for Long Beach. Goalkeeper Alexandra Hastings, who finished the game with 26 saves, made a diving stop on the Quakers’ next attempt, setting the stage for an unlikely hero.

Freshman Kylee Dowler, who was called up from the JV, was picked as the next shooter.

“Sometimes, some of your best players could feel like they have more weight on them then someone who could feel like it’s a nonchalant kind of thing for them,” Castanio reasoned. “I kind of went for a power move. I thought pressure-wise, she would step up and say, ‘I got this.’”

Dowler blasted the ball into the net, shocking the crowd.

“It was crazy,” Castanio said. “All of the girls piled on each other. It was super-exciting.”

The Marines lost to defending county champion South Side in the second round, but Castanio still lauded the girls for their efforts while in a new division.

“I was proud of them,” she said. “They pulled together, they believed in each other, and we got that [playoff] victory. That was good.”