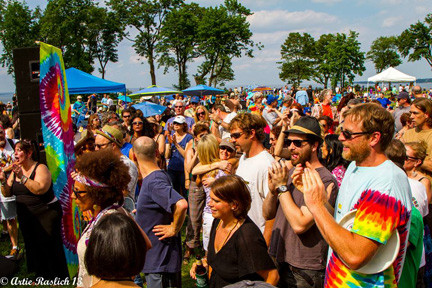 Rock Village Festival
Five of the area’s favorite tribute bands headline the Rock Village Festival, an all-day extravaganza at Madison Theatre’s Public Square. Abraxas, Half Step, Seven Turns, Soft Parade, and Who’s Next perform the classic tunes of Santana, the Grateful Dead, Allman Brothers, The Doors, and The Who. The event, produced by Rich Rivkin, is an arts “experience” that combines music with artists who simultaneously paint during the performances, while the audience wanders about. “This charged atmosphere becomes exciting entertainment, and makes for a uniquely cool vibe,” says Rivkin. “Fans move to the groove, while watching amazing works of art come to life before their eyes.”
Saturday, July 27, 2-11 p.m. $20; Madison Theatre’s Public Square Lawn, Molloy College, 1000 Hempstead Ave., Rockville Centre. For information, visit www.RockVillage.us or www.madisontheatreny.org.

Antigone Rising
The all-female ensemble, Antigone Rising, is ready to rock the beach, when the ladies perform a free concert at Nickerson Beach. Known for their soaring three-part harmonies and a driving and vivacious live show, the band is influenced by classic rock from the 1970s, along with a mix of country and pop elements. The band — comprised of sisters Kristen Ellis-Henderson and Cathy Henderson on guitar, Dena Tauriello on drums, and vocalist Nini Camps — has had a busy touring schedule, appearing with the Rolling Stones, Aerosmith, the Allman Brothers Band, the Dave Matthews Band, Rob Thomas, Joan Jett & The Blackhearts, Lucinda Williams, and the Bangles, among others.
Sunday, July 28, 7 p.m. Admission is free. Bring seating. Nickerson Beach, Lido Blvd., Lido Beach. (516) 572-0200.