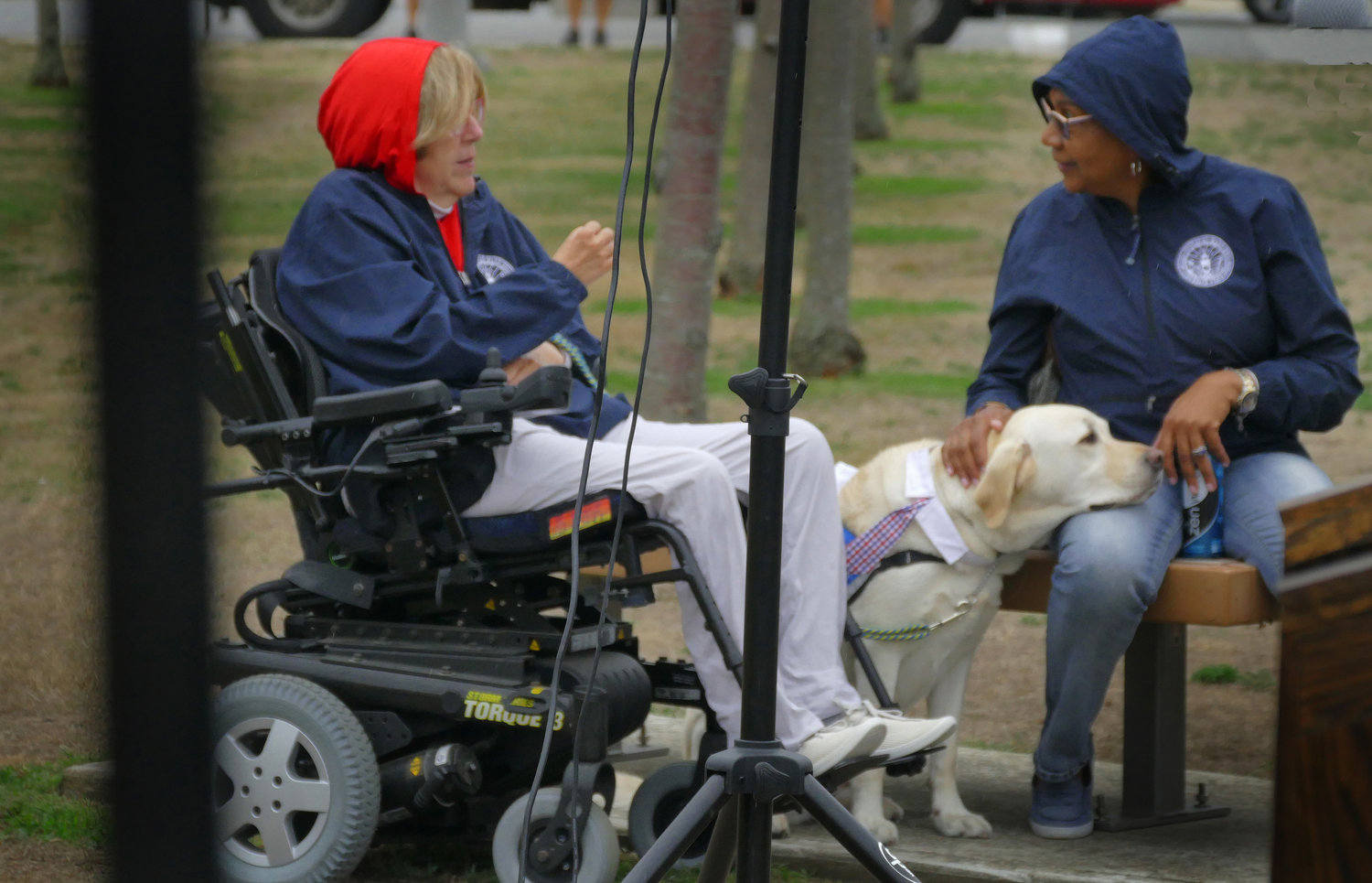 Ask anyone in Long Beach how many city council members there are, and they will say five. But there is one more, sort of.

But this one never proposes legislation, argues with other council members, voices an opinion, or bores audience members with tedious talk of government bureaucracy.

That’s because this one is a dog – MacGyver,  the service dog owned by councilwoman Liz Treston, who has used a wheelchair since a spinal cord accident 30 years ago.

MacGyver is a five-year-old white Labrador Retriever Treston received in 2019 from the Northeast Region of Canine Companions, a national organization that has an 11-acre, 30,000-square foot care center in Medford, in Suffolk County.

MacGyver rarely misses a regular council meeting or a work session and always accompanies Treston to events on weekends or at night in Long Beach. Only last Sunday afternoon, he accompanied Treston to Long Beach’s 21st observance for victims of those killed in the terror attacks on Sept. 11, 2001.

He is a busy guy.

“When I’m at a meeting and I drop a pen or a piece of paper, he will pick it up and put it in my lap,” said Treston, who is city council vice president. She took her council seat in January 2020 along with Karen McInnis, who is now city council president and Michael Delury who lost his re-election bid last year.

Treston uses an electric lift chair to get up to the dais at city council meetings. MacGyver will wait for his signal to join her, and then will sit by her side until all the hub-hub is over. He is a favorite among council members, city officials and attendees. Many come by to say hello and give him a pat.

There are members of boards or councils who use service dogs. But not many.

“It’s not unheard of,” said John Bentzinger, a spokesman for the Northeast Region of Canine Companions. “But it’s rare.” The Nassau County District Attorney’s office makes use of a Canine Companion dog during interviews, primarily with children, who have been victims of violent attacks. The dogs are used to calm the children, Bentzinger said.

“We had a Canine Companion in this office for many years. Her name is Mega. Was here for at least eight years or so,” said a DA spokesman Brendan Brosh. “

Her owner/handler just took a job a few days ago with Suffolk DA’s office. Mega’s last day was 8/31 or so.”

Before MacGyver, Treston had another service dog, Finney, a black Lab who retired in 2018, but remains living with the Treston family.

The process for training service dogs is exacting. After the dogs are weaned from their mothers, they are given to volunteers, who keep and socializing them for about 1 ½ years.

“After that, we ask them to do something hard – say goodbye to them,” Bentzinger said. They are then sent to Canine Companion training centers around the country, including in Medford, to work with professional instructors for six to nine months. They are taught to open and close doors, push wheelchairs, pick up papers or pens.

Not all dogs “graduate” to become service dogs. Bentzinger said last year, the Northeast region placed about 70 dogs. Nationally, about 400 were placed. The numbers that started professional training were double the 70 and 400, he said.

The cost of training one dog is $50,000. The organization is completely supported by private donations.

A thorough process is used to match process dogs with people. “If a dog is unhappy, the situation is not going to work,” Bentzinger said. Treston spent two weeks in training sessions with MacGyver before taking him home

“I knew after those two weeks I had to have him,” she said.”