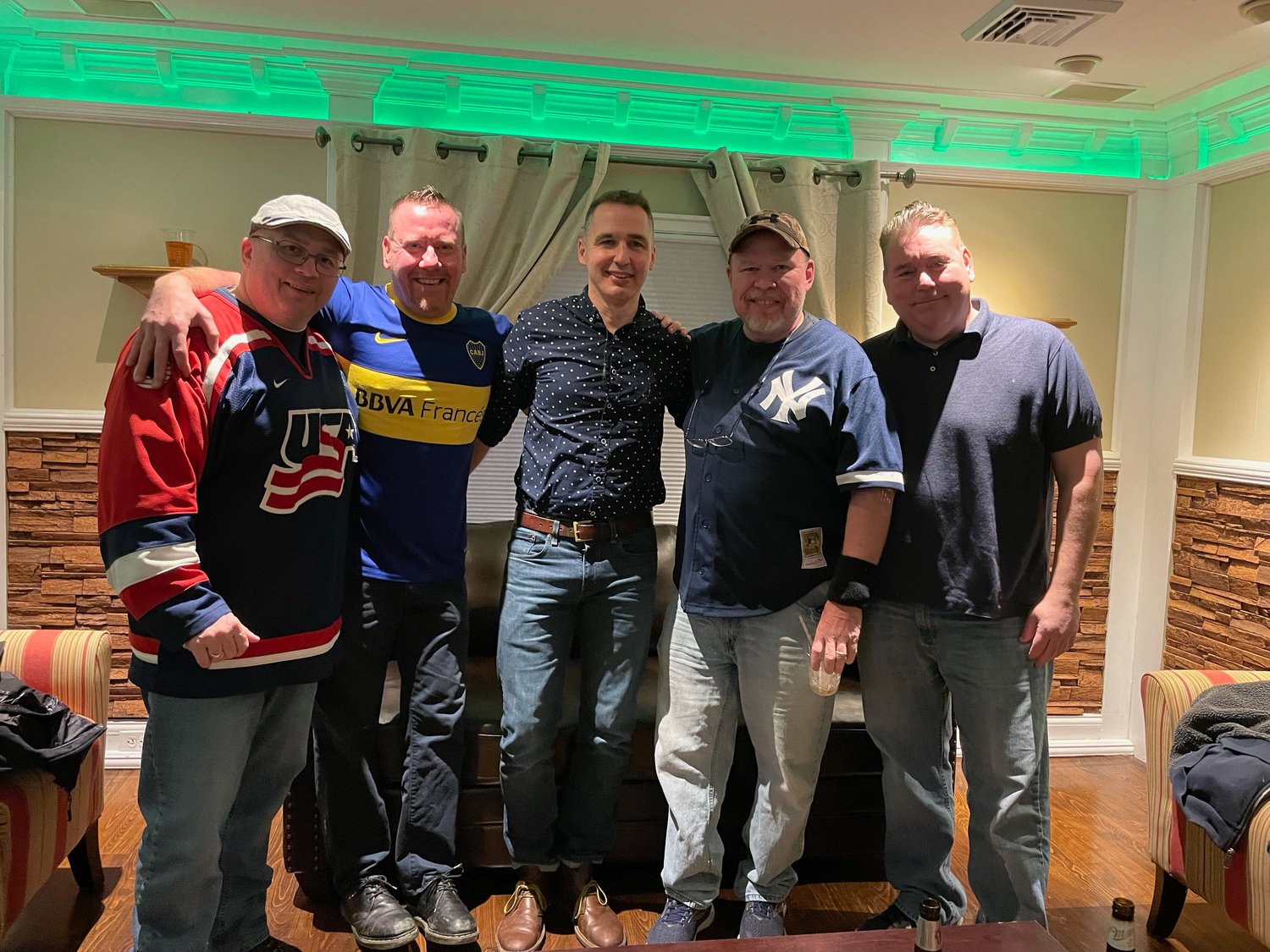 Irish band Shilelagh Law hosted a meet-and-greet prior to their performance.
Maria Cestero/Herald 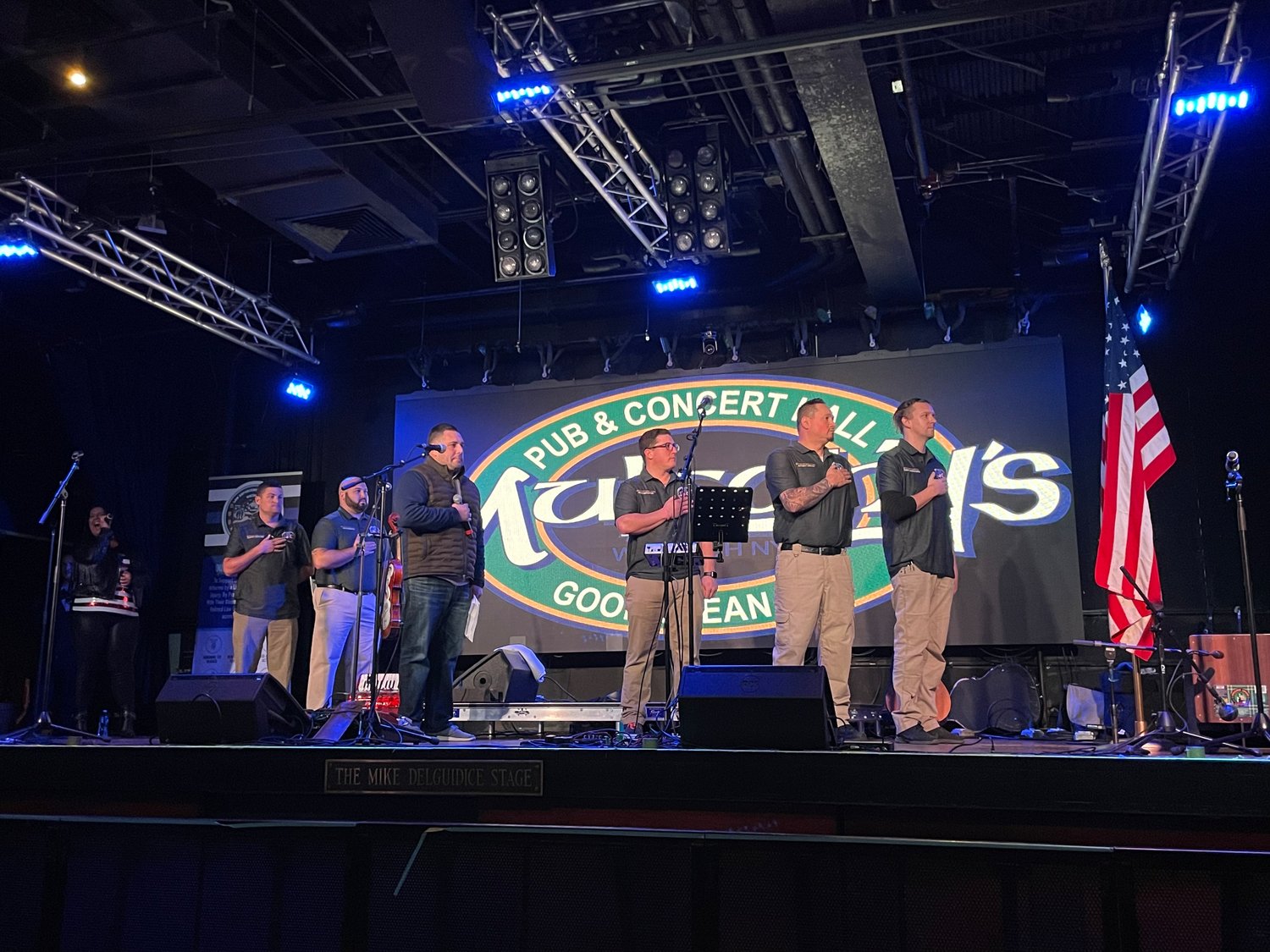 Members of LEO Weekend and councilman Anthony D’Esposito (center) stated the Pledge of Allegiance on the stage at the fundraiser.
Maria Cestero/Herald
Previous Next
By Maria Cestero

Festivities began at 7 p.m. with a live auction, prizes, food and drinks. The event was organized by LEO Weekend, a nonprofit group founded by New York City police officer Austin Glickman. The organization hosts around 14 events per year, all to benefit law enforcement. This was their first fundraiser at Mulcahy’s.

“The idea came to me in 2014 when I was still a police recruit for the NYPD Academy,” LEO Weekend president Glickman said. “It was during a time where there was a negative light on law enforcement and stress levels of law enforcement was through the roof.”

Glickman said he searched for organizations that funded retreats for police officers and he found none. He worked for about two years to create the nonprofit, and it launched its first event in 2017 at Lake George, NY.

It quickly became a collective effort between seven board members: all first responders. Born and raised in Long Beach, Glickman hoped the Mulcahy’s fundraiser earned more than the previous year.

“We’ve stepped up, especially through the pandemic, coming to work everyday to make sure we can continue to make our communities safe,” said president of the Suffolk County Corrections Officers Association Louis Viscusi, 45. “My hope is that the community will see us in a more personal light instead of just our uniform and see the good people that we really are and the hard work that we do to protect them everyday.”

As volunteers made their way through the crowd selling raffle tickets, LEO Weekend founding board members took the stage to thank members of the community for attending the event. Hempstead Town Councilman Anthony D’Esposito, an event co-organizer who is a former NYPD member, was introduced.

Oceanside/Island Park Herald 2021 Person of the Year, Chelsea Euliano, 35, performed the National Anthem. Dressed in a sequined American flag top, the crowd cheered for her as she finished the Anthem.

Councilman D’Esposito and Nassau County Police Department Commissioner Patrick Ryder gave speeches in support of law enforcement. They both thanked the community for attending the fundraiser.

Ryder introduced George Day, a 14-year veteran of the force, who had received a vacation from LEO Weekend after being the victim of a hit-and-run in Bellmore.

New York-based Irish band Shilelagh Law then took the stage. The group features two FDNY members and one NYPD officer. They were eager to support the cause, said band member Kevin McCarthy.

“We love it here, the staff is amazing, the people are great, and we love performing here,” McCarthy said. “It’s one of our favorite places to play, and we’re helping out a good cause.”

A close-knit group, the band members made jokes and laughed as the crowd took turns taking pictures with them during a meet-and-greet session. The band performs at Mulcahy’s about three times a year, usually in March, McCarthy said.

“I’ve known the LEO Weekend guys for a long time, and being a former PBA trustee, I know the outstanding work that they do for the families of those who are injured severely or killed in the line of duty,” Carini said. “I’m here to support a cause that I’ve known for years.” A police officer for 22 years, Carini also promoted the event alongside D’Esposito.

A frequent visitor of Mulcahy’s, Damien Gallo, 42, attended the event. A Wantagh resident for 45 years, Gallo said he was eager to help a good cause.

“The police are always there for you when you are in trouble, so I’ll help them out in any way that I can,” Gallo said. “The charity is the best part of this event.”