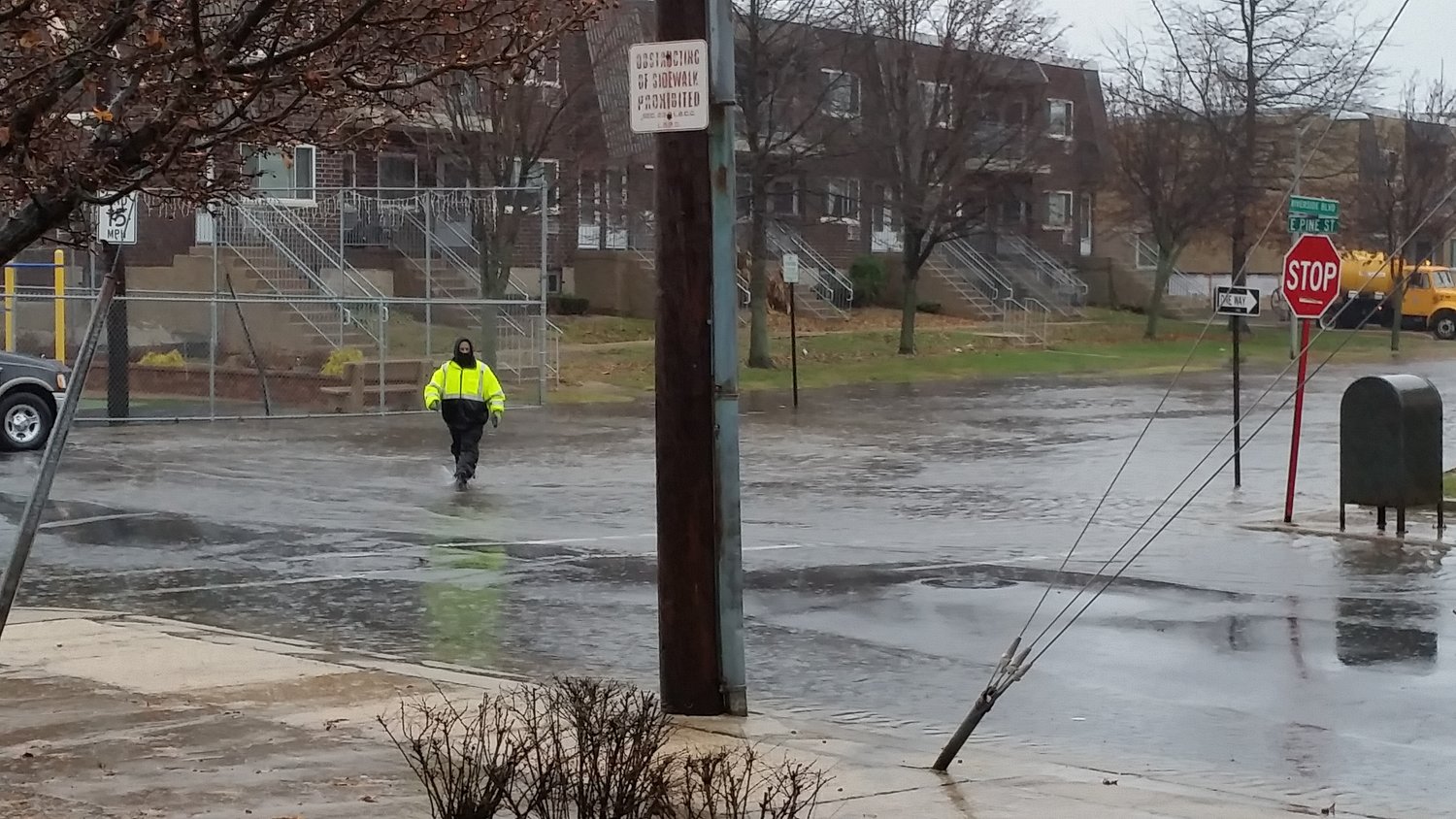 A maintenance worker slogged through the flooded streets of the North Park section of town after a rainstorm.
Courtesy Crystal Lake
By James Bernstein

Crystal Lake told the Long Beach City Council Tuesday night that, as a 60-year resident of the city’s North Park section, “I have sand in my shoes.”

That, Lake said, she likes. But, she said, she regularly has something else in her shoes that she doesn’t like — water.

Lake said the largely Black North Park section of town has been ignored over the years by the city when it comes to flooding problems. “There are flood protections, or measures for flood protections, in Long Beach,” she said, “with the exception of North Park.” She added that flooding has ruined dozens of her shoes.

Long Beach has two major projects earmarked to provide protection from flooding. The Federal Emergency Management Agency has pledged $39 million for what is being called the North Shore Critical Infrastructure Protection Project, which is to include new steel bulkheading along Reynolds Channel, from Monroe Boulevard to Memorial Park, as well as construction of a new pump station on Riverside Boulevard.

The other project involves drainage improvement on Pine Street, which is 95 percent complete.

During Hurricane Sandy in 2012, some North Park residents say, water rose to their front porches. But even during relatively light rain, they say, there is flooding.

Lake noted that the lowest elevation of the city is on its bayside, where North Park is. “There should be an uproar by the entire city,” she said. “That side of the city should have protection. What measures are being taken to move this project forward expeditiously?” she added of the FEMA proposal.

John McNally, a spokesman for the city, said that the city’s public works commissioner, Joe Febrizio, is currently negotiating with contractors to build bulkheads for the North Park area. “The project is about to commence,” McNally said.

James Hodge, a former board chairman of the Martin Luther King Center, in North Park, also weighed in on the area’s flooding problems. “For too many years, North Park has been under-served,” Hodge said. “The whole city has protection, but not North Park. We’ve got the money, but (city) administration after administration has done nothing.”

Lake asked that a public report be issued about progress on the project. City Manager Donna Gayden said she would ask Febrizio to provide an update at the next council meeting.

Is a pop-up party in the works?

At the council meeting, Police Commissioner Ron Walsh warned that the Police Department had received information that a “pop-up” party is planned for the boardwalk on Friday night. On at least one occasion last summer, a thousand or so young people crowded onto the beach, and had to be dispersed by police officers.

“I would advise them not to come,” he said, and added that coolers and bags people brought to the beach would be searched. Last summer, police headed off such a party by holding a news conference a few days before it was planned to take place, saying that it could not be held in Long Beach. Electronic signs posted on the Meadowbrook Parkway leading into Lido Beach said that the party had been “cancelled.”

In other action, the council set July 19 for a public hearing on whether to allow inline skating on the boardwalk, after a resident, at the June 21 meeting, asked why skating is not permitted.