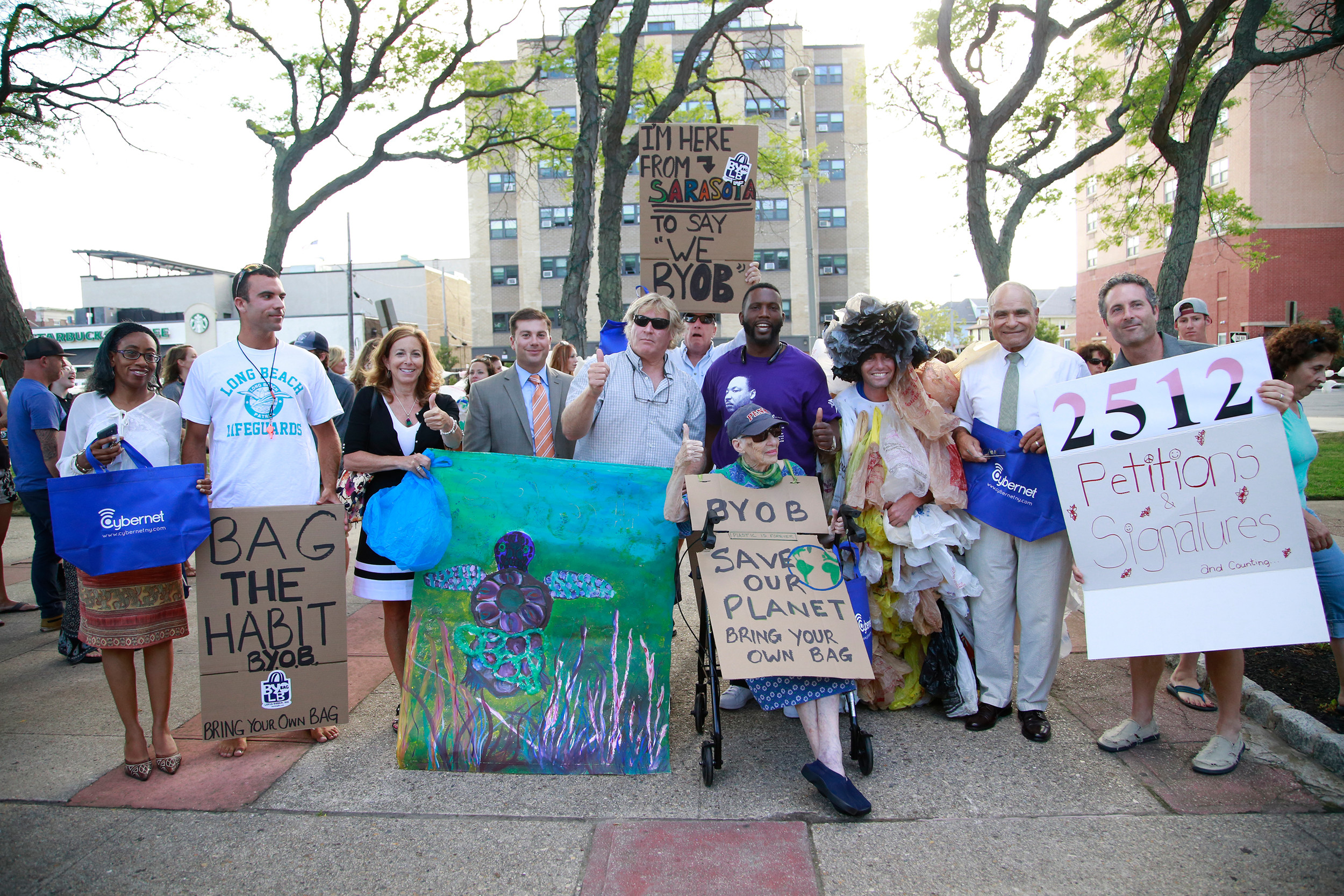 Residents and city officials gathered on July 19 at Kennedy Plaza in support of a ban on plastic bags, that scatter by the thousands into Reynolds Channel and elsewhere.
Sue Grieco/Herald 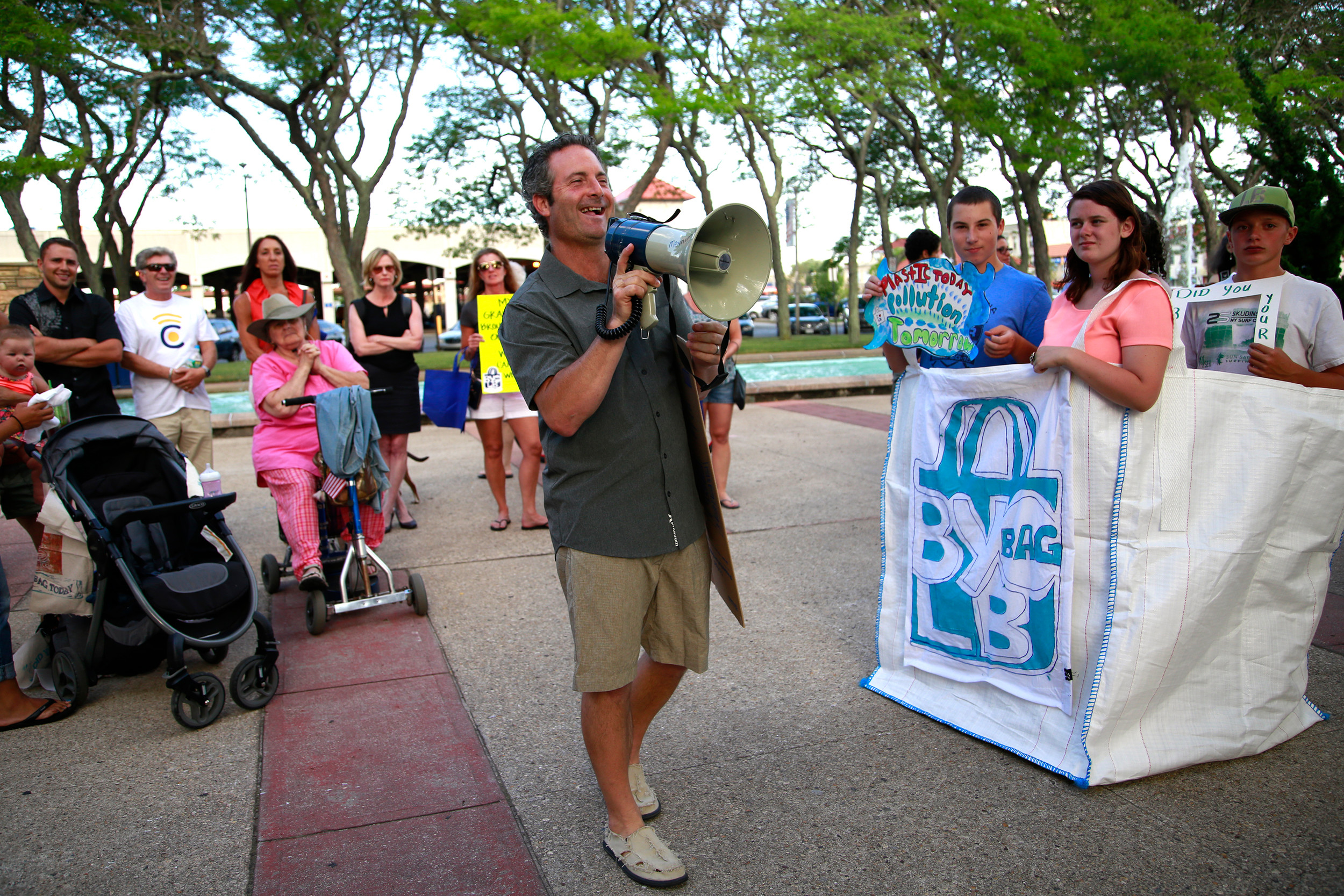 George Povall, of All Our Energy, led the rally, which called for a city ban of single-use plastic bags.
Sue Grieco/Herald 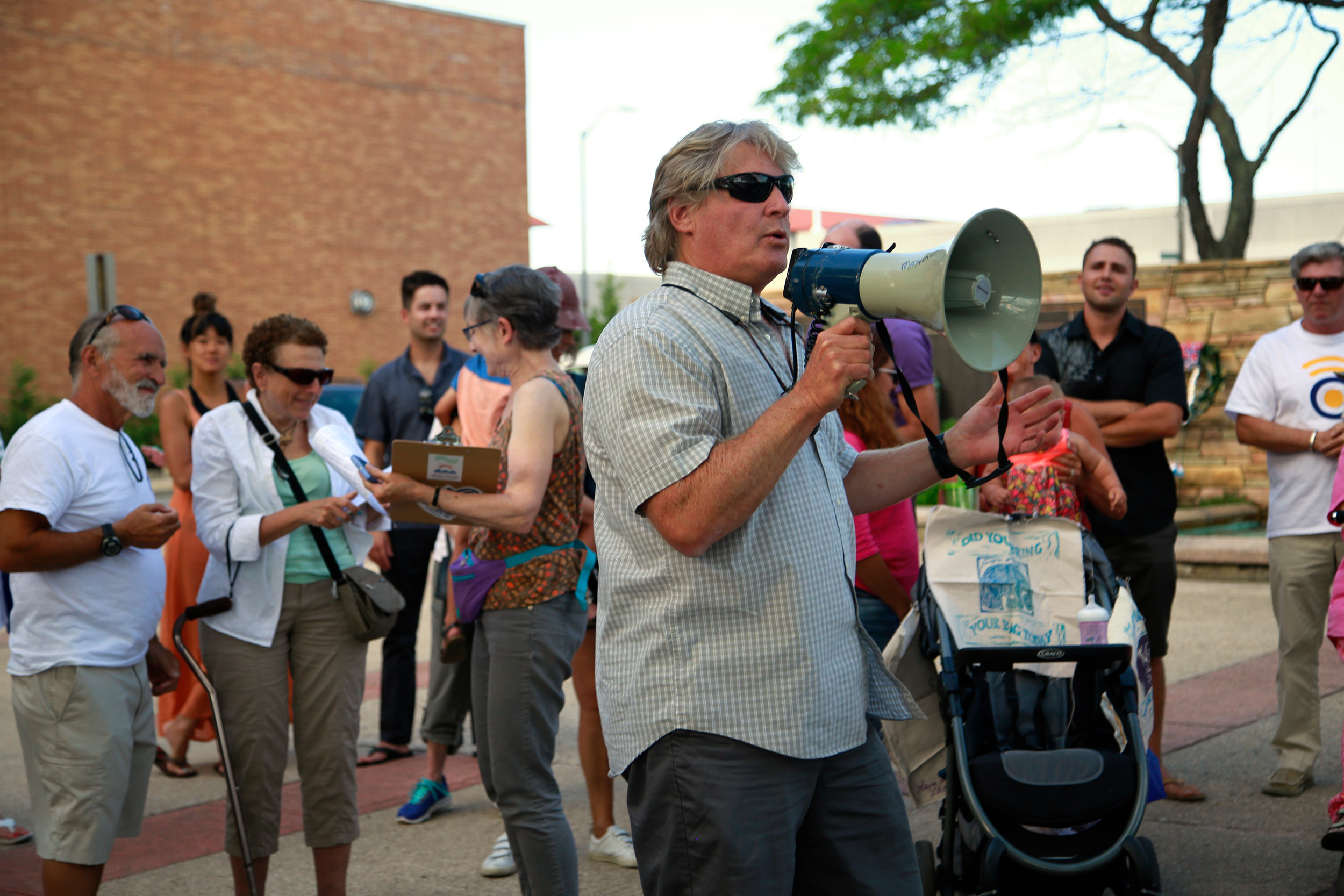 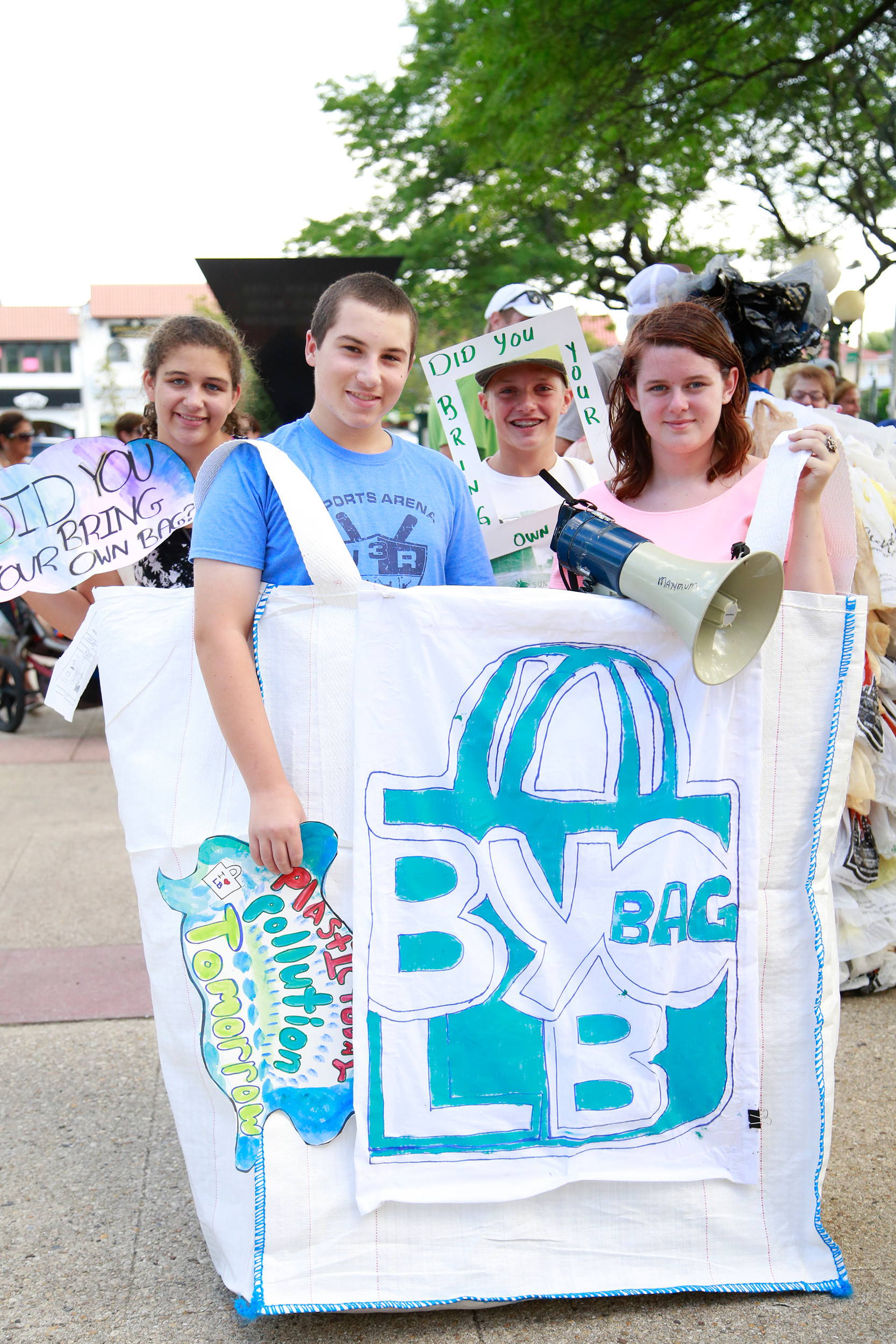 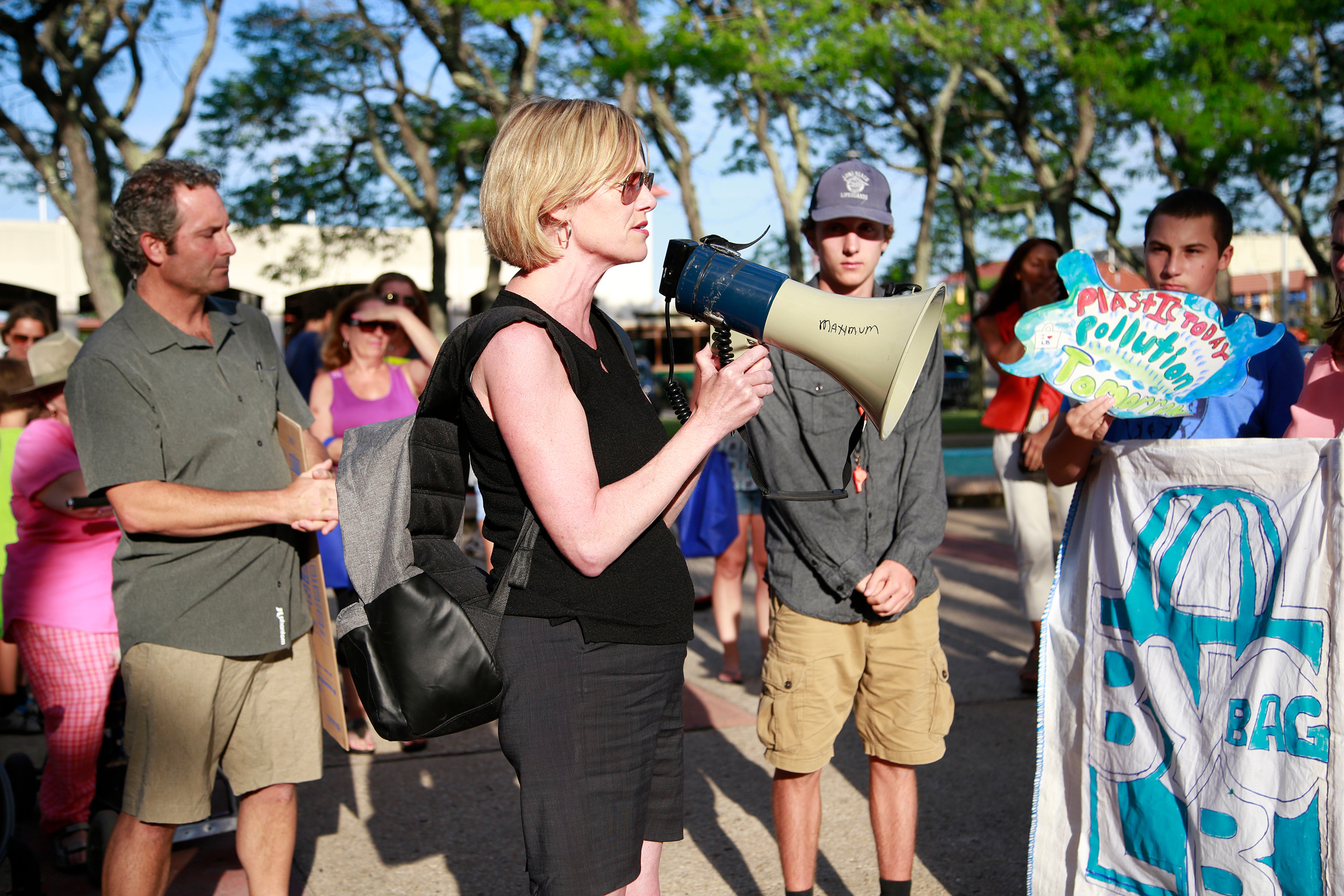 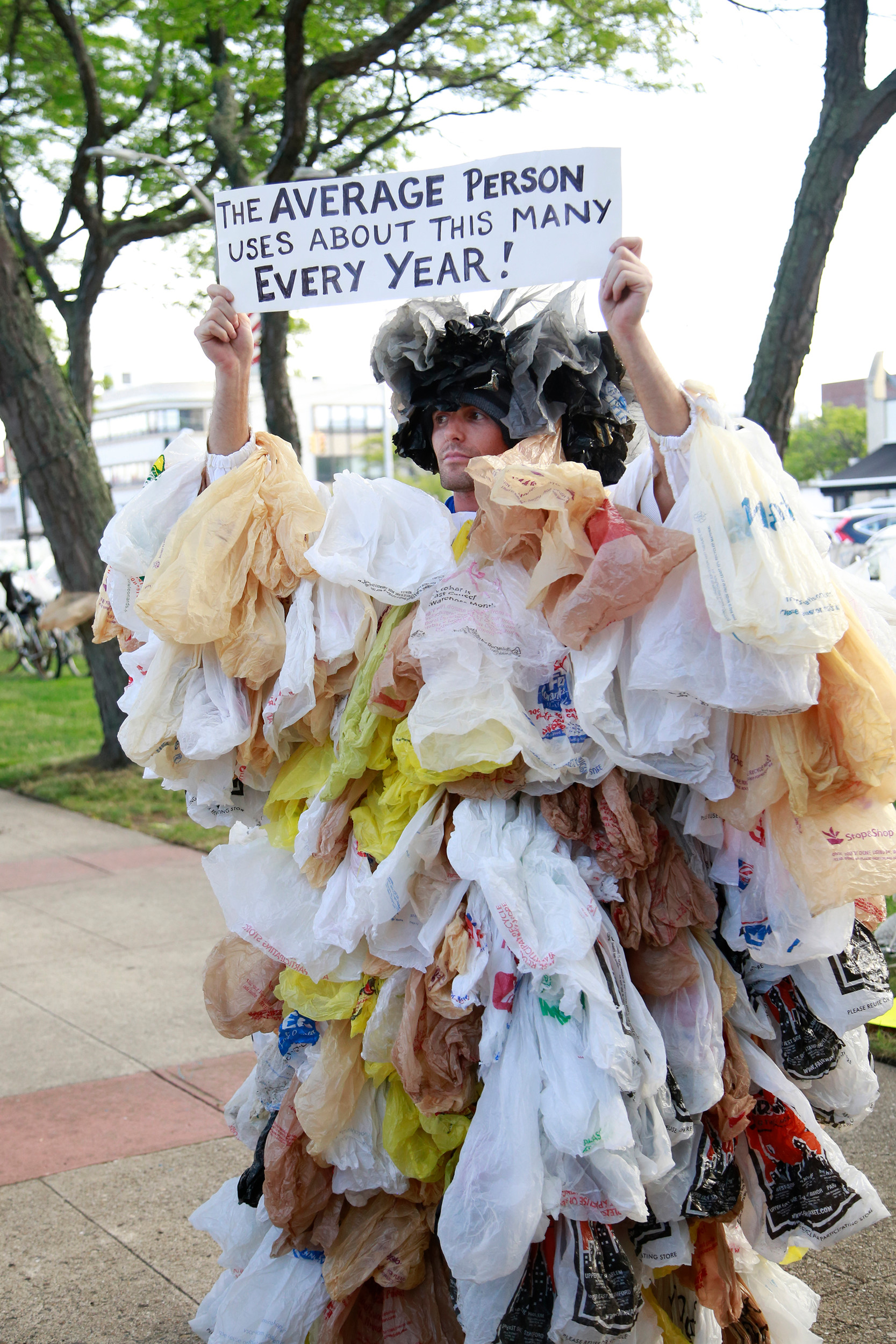 Long Beach resident Joseph Naham stuck hundreds of plastic bags to his body to show how many bags the average person uses in a year.
Sue Grieco/Herald
Previous Next
By Ben Strack

Residents and community leaders joined members of the Long Beach City Council in Kennedy Plaza on July 19 to rally for city legislation that would ban single-use plastic bags.

George Povall, of All Our Energy, said his non-profit began organizing people passionate about the issue, and has spearheaded a “bring your own bag” campaign to raise awareness of the damage disposable bags do to the environment.

“The issue is, can we cut back or eliminate plastic bag usage in Long Beach, like they’ve done in so many places, and the answer, resoundingly, is yes,” Povall said. “This is to let [the city] see that people are very into this and that it’s time to act. It’s time to take it to the next level.”

Gasps and groans filled the plaza when Povall told the dozens in attendance that the city uses 11 million plastic bags per year. Scott Bochner, a local environmentalist who sits on Long Beach’s Environmental Advisory Board, said that 9,500 plastic bags were removed from Reynolds Channel last year. He, Povall and others repeatedly pointed out that the solution to the problem is as easy as bringing reusable bags to stores, and a city ordinance would help solidify such a change.

“I think that it’s a really positive change that will actually not only make Long Beach stand out as the premier place to live, work and visit, but we’re also going to be protecting the things that make Long Beach great, which is our natural environment,” Bochner said.

City Councilwomen Eileen Goggin and Anissa Moore pledged their support, as did Council President Len Torres, who said that about four years ago, his bulldog puppy became sick and wasn’t eating. A veterinarian’s X-ray revealed a plastic bag in his stomach.

“That made me so angry, and that was really, for me, one of the beginnings of my position against plastic bags,” Torres said. “And of course, when I saw the bill for the dog, too, I became even more angry.”

Long Beach resident Joseph Naham stood out in the crowd, with hundreds of plastic bags stuck to his body to show how many the average person uses in a year — around 500. Children rushed up to Naham to pose for pictures with the “plastic bag monster.”

“It’s not about me, it’s about the species that cannot even have a voice for themselves,” said Naham, who addressed the City Council at its meeting later that evening. “I’m coming here trying to visually give people a reality check of what’s really going into our environment, and I think this does a good job of it.”

More than 2,500 people have signed a petition in support of banning plastic bags in the city, including representatives of 82 businesses, and Povall stressed that both residents and merchants are backing the campaign. But Adrienne Esposito, executive director of Citizens Campaign for the Environment, said that supporters would have to battle opposition from plastic lobbyists to successfully impose a ban.

City Manager Jack Schnirman said his office had worked with the Environmental Advisory Board and many other supporters for almost a year, and the city has extensively researched the issue and helped educate the public about it. “Bag It,” an award-winning 2010 documentary that details the impact plastic bags and other consumer goods have on land and marine environments, as well as the human body, was shown at City Hall and Bridgeworks, a local co-working space, earlier this year, and attracted residents to National Boulevard beach last Friday, where the city offered another free screening.