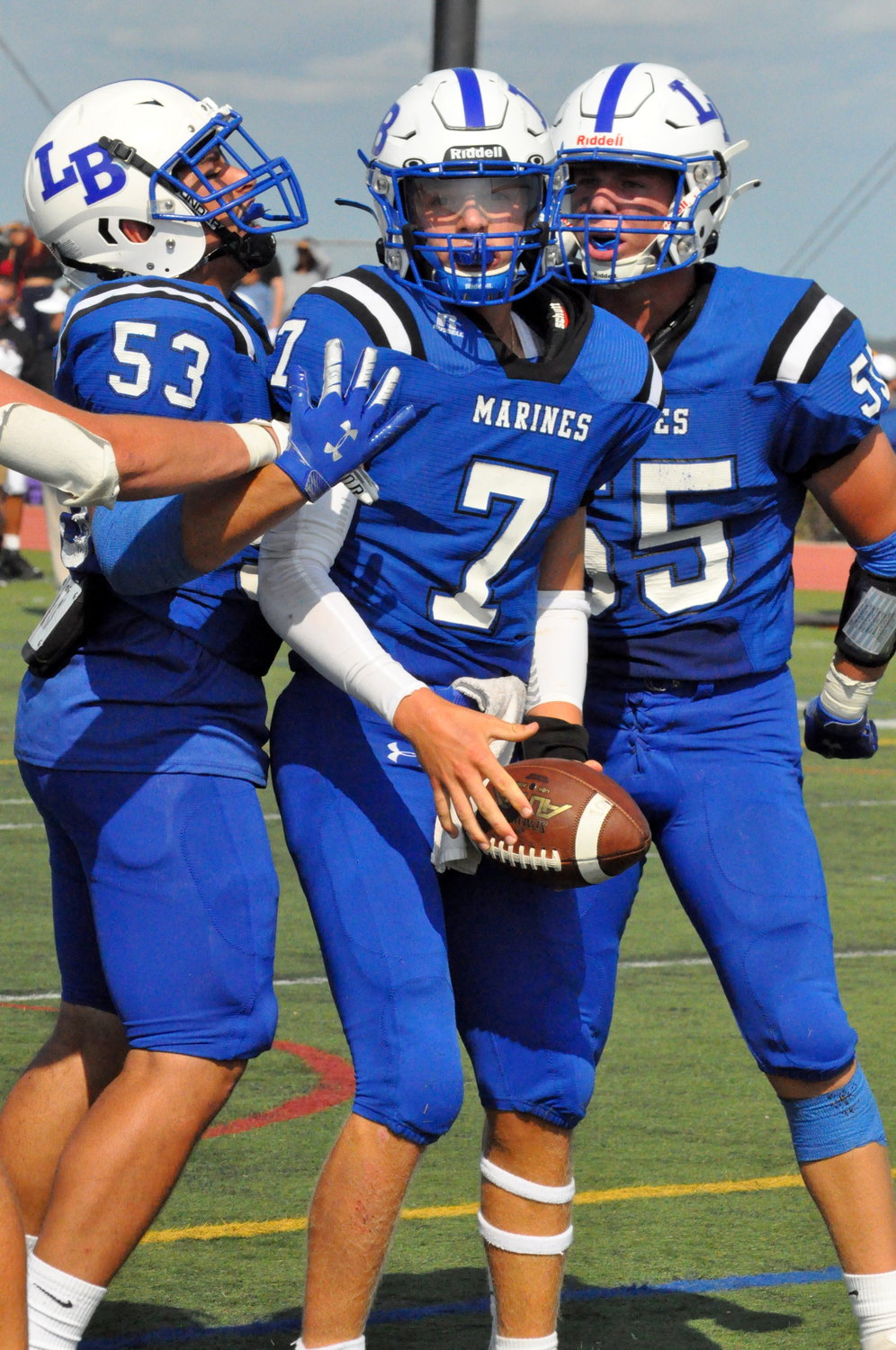 Conway threw for 200 yards a pair of touchdowns and also ran for a score to lead the Marines, who managed two huge takeaways in the third quarter to protect a 17-7 halftime lead. Senior Jack Miller recovered a fumble in the end zone and junior Luke Hartman picked off a pass in the red zone to keep the Indians from making it a one-possession game.

“The kids couldn’t see beyond last week’s loss for a while, but they got back to work and made some big plays on both sides of the ball today,” said Long Beach head coach Scott Martin, who’s squad was coming off a 21-14 loss at Garden City.

Five plays following Hartman’s interception, the Marines faced a fourth-and-5 from the Sewanhaka 13 when Conway was flushed from the pocket by an all-out blitz. He kept the play alive with his legs and made one of the biggest plays of the afternoon with his arm, finding a wide-open Hartman in the end zone for a 24-7 lead with 3:35 remaining in the third quarter.

“All the kids have done a great job picking up an entirely new offense,” Martin said. “It’s a passing offense. Conway does a nice job of buying time with his legs and he has a good arm.”

Long Beach opened the scoring early with a 27-yard field goal by Nico Kanganis, who starts on the offensive line along with fellow juniors Tucker Bogacki, Julian Mercado and John Sofield, and senior center Mhasyn Rowland.

Conway hooked up with senior tight end Jack Skarren on a 65-yard touchdown pass down the middle late in the first quarter and it was 10-0. The Indians answered when a long kickoff return by senior Michael Staiano set up senior quarterback Dominick Balletta’s 8-yard scoring strike to senior Jermel Heard Jr. early in the second, but the Marines answered with a 2-yard touchdown run by Conway to lead again by double digits.

“It was back and forth most of the game and for the most part I was really happy with how we played,” Sewanhaka head coach George Kasimatis said. “We just had a few mental breakdowns that cost us. Long Beach is a very good team and we hung with them. We’ve got a lot of young kids and we’re hoping we grow and improve each week,”

The Indians, who defeated Herricks 13-9 in the opener, squandered a couple of golden opportunities in the second half to make Long Beach sweat. A leaping 30-yard catch by senior Kamari Denhart set up a first-and-goal that went uncashed. Their next possession began at the Marines 24 but lasted just one snap as Hartman stepped in front of a receiver and intercepted Balletta.

Junior Ihiem Blackwell had an interception and fumble recovery and freshman Hezekiah Faison added a fourth-quarter touchdown run for Sewanhaka, which visits Kennedy this Saturday. Long Beach travels to MacArthur. Kickoff for both games is 2 p.m.