Improv theater comes back with a bang 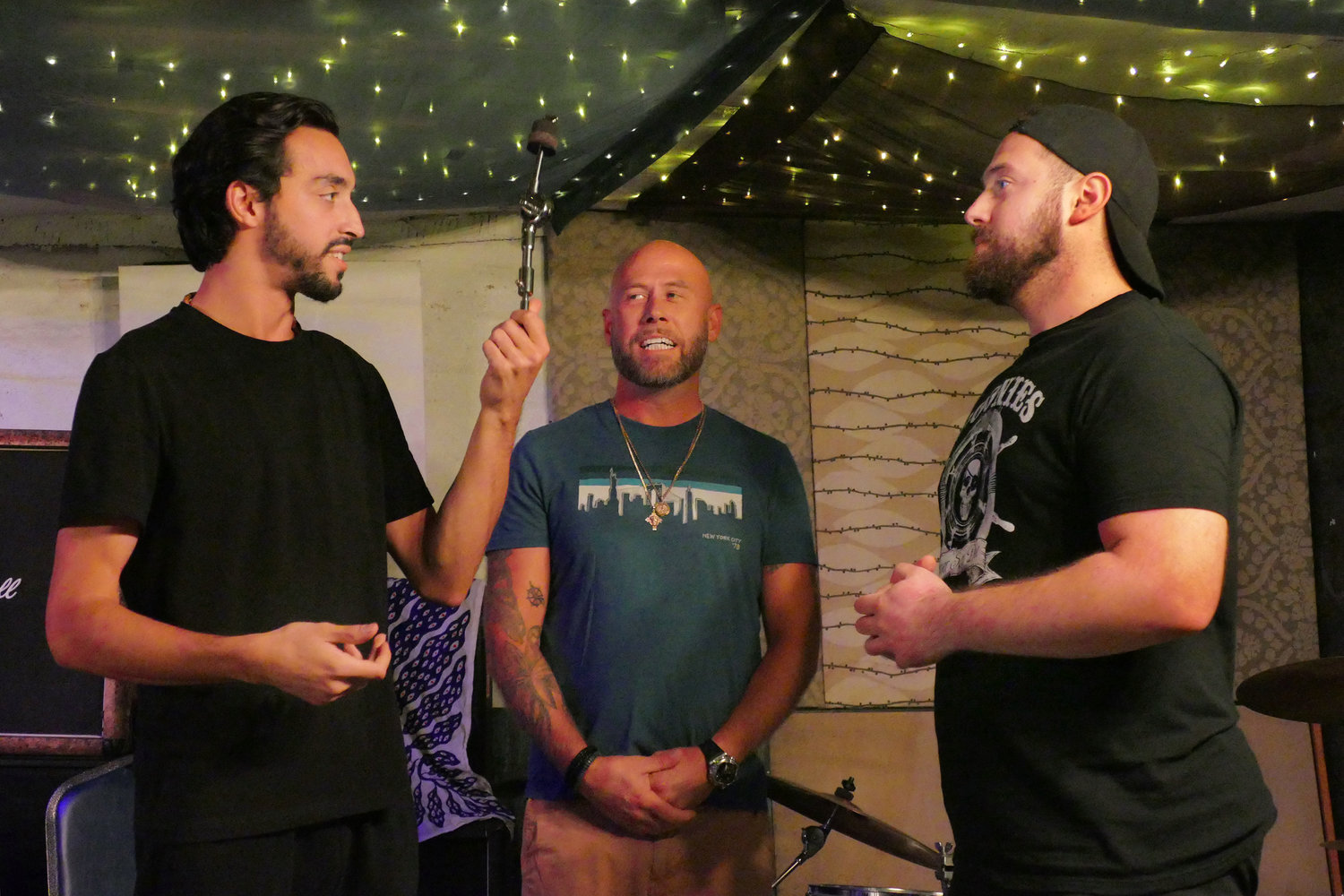 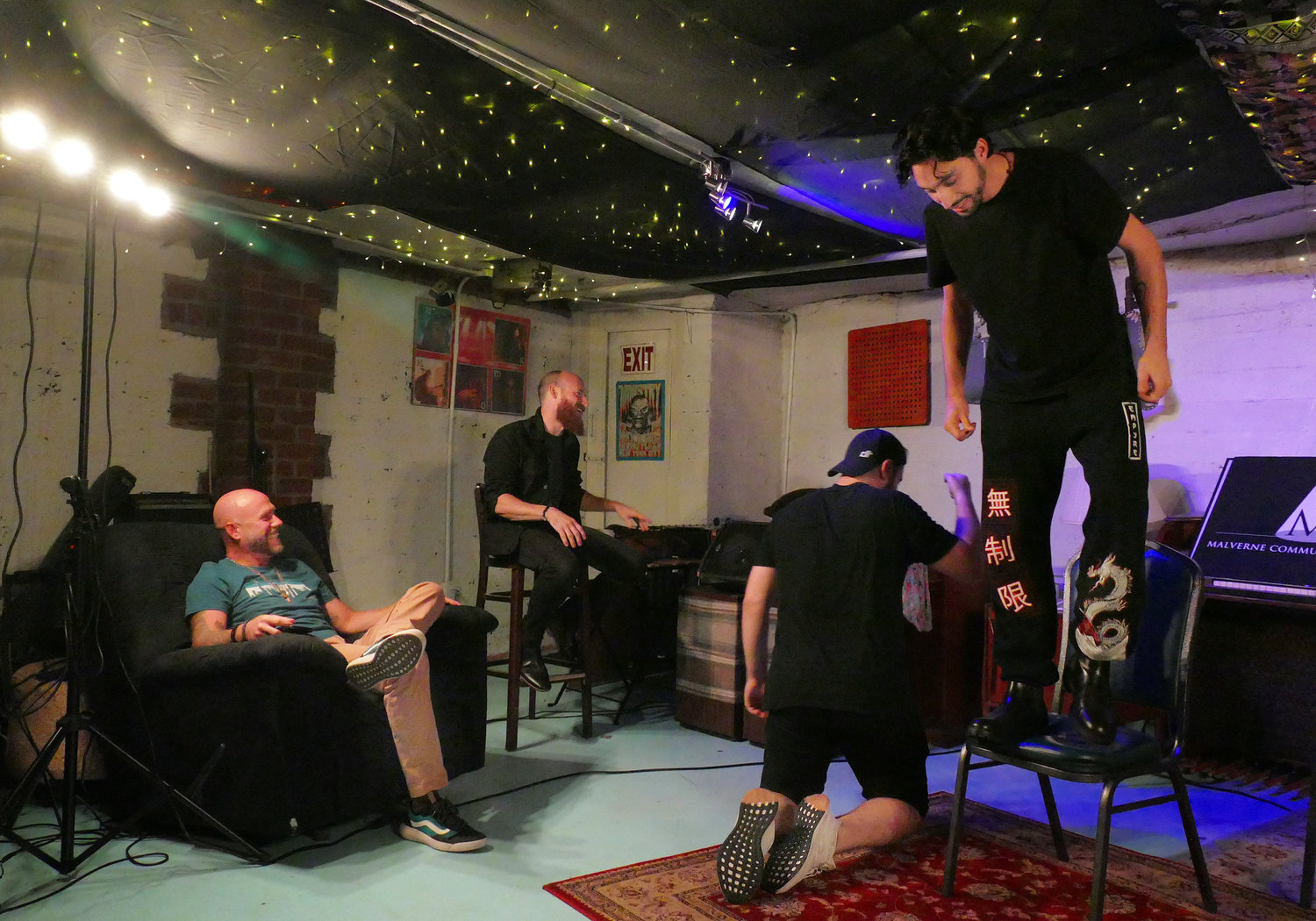 Billy Callahan, David Coonan, Joe DiGirolamo, and Mike Pagano acted out a violent takeover of the Wheel of Fortune set by crazed koalas in their final sketch on Sept. 29.
Joe Abate/Herald
Previous Next
By Kyle Chin

Chaos reigned in the depths of Creative Corner in West Hempstead as Mprov, a branch of the Malverne Community Theatre, made a triumphant return to live performance on Sept. 29.

Performers Billy Callahan, Mike Pagano and Joe DiGirolamo bounced around the walls of Dollie’s Garden, a basement performance venue beneath Creative Corner, an art and music space in West Hempstead.

The ringleader of this merry band was David Coonan, director of Malverne Community Theatre and theater director at Malverne High School.

The performers share a long history: Coonan and Callahan went to high school together in Malverne, and Coonan taught Pagano and DiGirolamo at Hicksville High School.

Thursday’s performance was broken up into a number of sketch games, each having unique rules, themes or scenarios the three actors had to act out.

The three actors portrayed a host of wacky characters throughout the performance. Some characters and elements even carried through from sketch to sketch.

In the first segment, the three performers were tasked with portraying experts in random fields. Callahan became a nerdy stamp collector, while Pagano played a pretentious German mime connoisseur.

In the same sketch, DiGirolamo took on the persona of sea shanty singer Seamus O’Houlihan O’Patrick O’Houlihan. He recalled that his favorite shanty was called “Ariel Mermaid of the Sea.”

“All she wants is to be a part of your world, and if you drink enough beers, she will appear,” he said.

In one sketch DiGirolamo portrayed influencer-turned-nature documentarian Jordi B. A tribe of sentient koalas with a taste for human flesh, as portrayed by Pagano and Callahan, would attack Jordi B, as he explored the Australian outback. The koalas would make a terrifying return in a final television surfing sketch, violently seizing control of the set of Wheel of Fortune.

Coonan said he was pleased to return to this zany and over-the-top style of performance after the pandemic had placed the group on a two-year holding pattern. In the interim, the four men and other members of Malverne Community Theatre still kept busy virtually.

“When the pandemic hit, we still wanted to make theater,” Coonan said. “So we figured we would try some virtual stuff. We did a lot of old radio plays. Everyone met on zoom and we would give out parts and perform. We did a couple of variety shows and one-act play stuff. We just really tried to play with the virtual space.”

Coonan said he was glad to meet audiences in person again. “Small stuff like this is the stuff that we love, where you just have a small, intimate audience of friends, and people who just enjoy the chaos that we create doing stuff like this,” he said.

Malverne Community Theatre was initially founded in 1967 and only functioned for about three years. However, technicalities of state law kept the organization alive on paper for more than 40 years while the group lay dormant. In 2011, Coonan decided to revive the troupe.

One of its first performances was a 2012 staging of Edgar Allan Poe’s writings reworked into a play. Coonan said he hoped to mark the 10-year anniversary of this occasion with another performance of Poe’s work sometime later this month.