'Ninjas' give local veterans special thanks 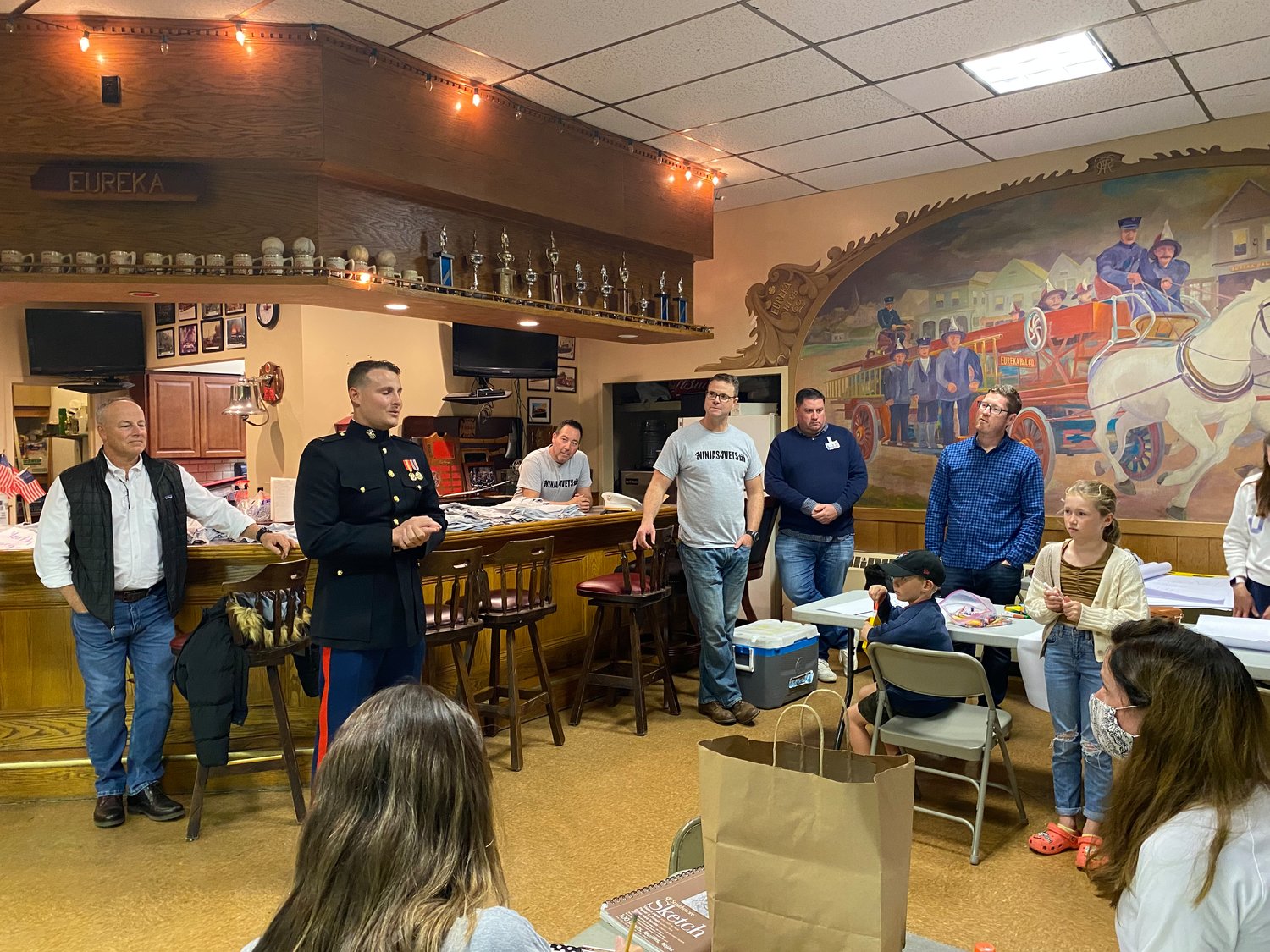 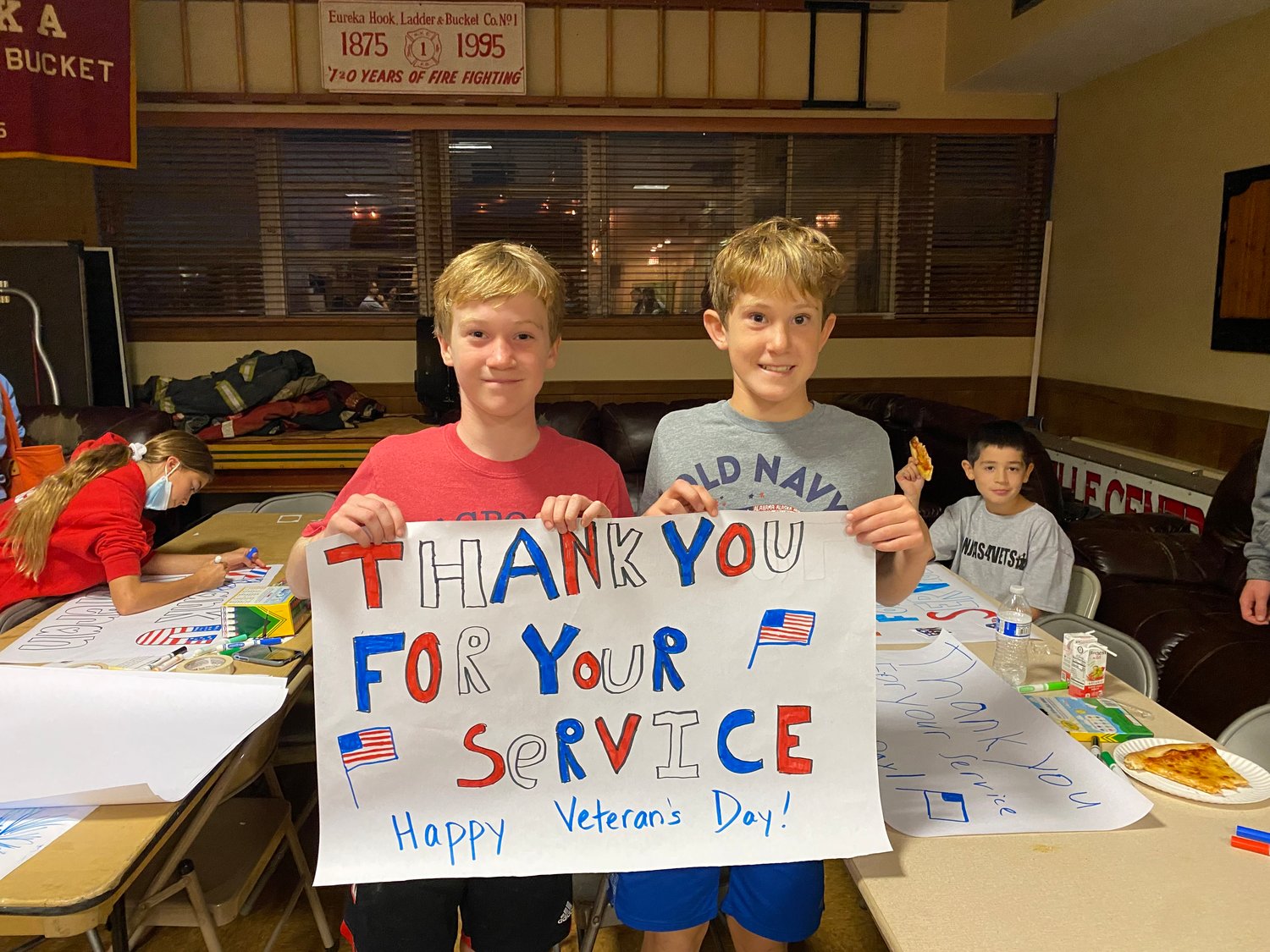 Brothers Brendan and Kevin Whaley created a poster for a veteran.
Tom Carrozza/Herald
Previous Next

Every poster is made just for that one veteran, so I think that neighborly, personal touch goes a long way. It certainly did for me.”
Tom Heptig, Member, Ninjas 4 Vets
By Tom Carrozza tcarrozza@liherald.com

The Rockville Centre-based movement Ninjas 4 Vets took to the streets on Nov. 10, with a mission of spreading joy to service members on the eve of Veterans Day. Families drove around to the homes of veterans and left surprise goodie bags and personalized thank-you signs at their front doors.

The night began at the Fire Department’s Maple Avenue firehouse, where dozens of children had a pizza party catered by Mother Kelly’s and made signs to thank local veterans. The children used markers, colored pencils and stickers to customize messages according to the military branch of their assigned veterans, and filled bags with candy for them as well.

The “ninja” part of the event came when the children, driven around by their parents, secretly delivered the packages so the veterans would be surprised to find them the next morning. Some 30 to 40 families took part throughout the night.

Before they set out, the participants were treated to a guest speaker, Rockville Centre native and Marine Corps Capt. Paul Wolfrom. Wolfrom, 26, comes from a military family: His grandfather and father served in the Marines, and his younger brother, Patrick, is now training for the Marines in Virginia. Paul was an artillery officer stationed at Camp Lejeune, in North Carolina, and most notably was de-ployed to Okinawa, Japan, for six months.

“We kind of call it the family business,” he said. “It’s something I always wanted to do.”

Tom Heptig, a Navy veteran who was one of the first to receive a poster and candy as part of Ninjas 4 Vets in 2015 and is now a member, contacted Wolfrom and asked him to be the program’s first guest speaker.

“It’s a charity that’s not raising money, but it’s about appreciating sacrifice,” said Heptig. “Where this starts to differ from a lot of other Veterans Day events and organizations is that this is so personal. Every poster is made just for that one veteran, so I think that neighborly, personal touch goes a long way. It certainly did for me.”

The movement continues to grow, as the Long Beach Waterfront Warriors voted in early November to form another chapter of Ninjas 4 Vets. It is something of a full-circle moment for the group, because founder Gene Vassel, a teacher at Woodland Middle School in East Meadow, cited the Long Beach veterans group as one of the main inspirations for him nearly a decade ago. Vassel befriended a veteran named Levi Crawford, from Arkansas, when Crawford gave a talk at a Waterfront Warriors event, and learned about the difficulties veterans face when they come home.

“The big vision is to have one of these in each town across America,” Vassel said. “I think as the word gets out, hopefully it continues to grow.”