Nothing sophomoric at South Side 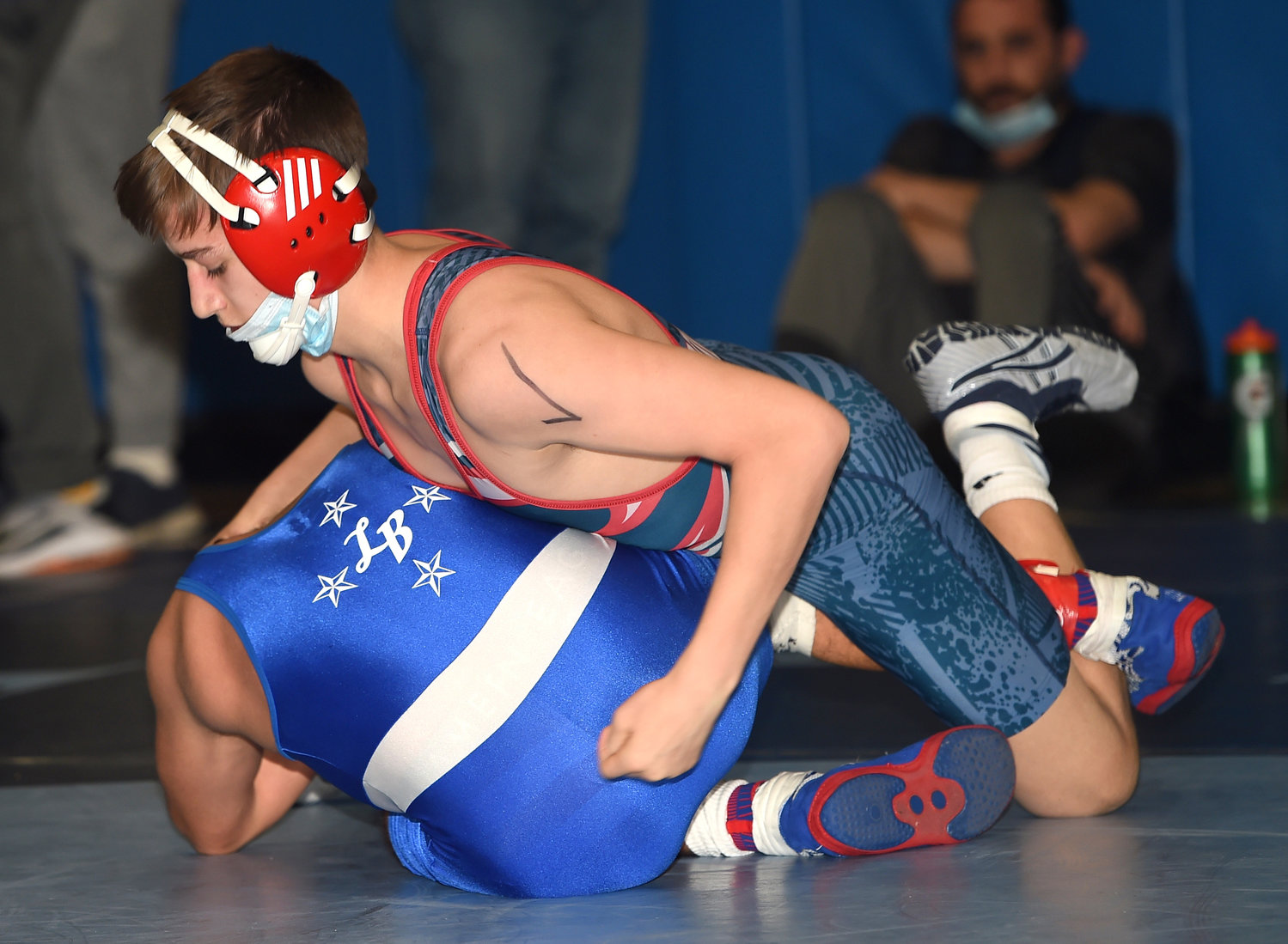 Thomas Wagner is off to a strong start for South Side including a first-place finish (132 pounds) in its host tournament on Dec. 18.
Donovan Berthoud/Herald
By Brian Kacharaba

eams with younger rosters usually experience some growing pains and this year’s South Side/East Rockaway wrestling squad is no exception, but the potential of these underclassmen point to a brighter future in Rockville Centre.
The roster is loaded with sophomores, and some of them shined in a 40-36 dual match win over Hicksville on Dec. 21 for the team’s first victory of the season. Joe Souto recorded a two-minute pinfall in his 110-pound matchup and Bobby Galindo needed just 44 seconds more to secure his victory in a 285-bout, but it was Nate Modico’s win in just under four minutes of his 126-pound bout that keyed the victory.
“Nate Modico came up big for us in that match,” coach Mike Robinson said. “I had him go up a weight class to 126. He came up big with a big pin.”
The Cyclones were without injured seniors Ryan Alfano and Andrew Cancel for most of the season so far and Robinson said he spent the first month of the season figuring out his lineup and his young wrestler’s tendencies, but things began to come into focus against Hicksville.
“The sophomores are the core right now,” coach Mike Robinson said. “They didn’t have last year, so they’re basically like freshmen. I think we’re going to go through some growing pains, but I think we have some good athletes and they’re going to help the program.”


The coaching staff is also high on sophomore James Beatty (215), a coachable and athletic JV callup who is “going to be a good wrestler,” according to Robinson.
The veterans also shined against Hicksville as Thomas Wagner (132) continued his stellar senior season with another pinfall win, as did Cobh Ferrick (215). Junior Logan Kelly (172) was dominant in a 12-4 major decision win.
Wagner has two tournament championships under his belt this season, taking the Frank Giampaolo Cyclone event at South Side High School on Dec. 18 before capturing the Massapequa Holiday Tournament after pinning his final opponent in just 56 seconds. At the Sprig Gardner event on Dec. 10 and 11, he had an upset loss in the first round before rallying to pin his next four opponents for a third-place finish.
“He’s got a real good shot at the state qualifier,” Robinson declared.
Souto won the Sprig Gardner with two decision wins by a combined score of 17-0 for his first career tournament victory. He finished fifth at The Battle of Long Beach the previous week and won his consolation final bout at the Giampaolo event.
“Joey’s that kid that worked hard in the off-season and is one of the hardest workers in the room,” Robinson said. “He’s very intense and really stepped up his game this year.”
Kelly also finished fifth at the Cyclone tournament and recorded a pinfall win in under two minutes against Oceanside on Dec. 1. Ferrick and heavyweight Rolph Brutus (285) both advanced to the semifinals at Long Beach and won their respective third-place matches.