Initiative to encourage neighbors to discuss ‘what makes them uncomfortable’ 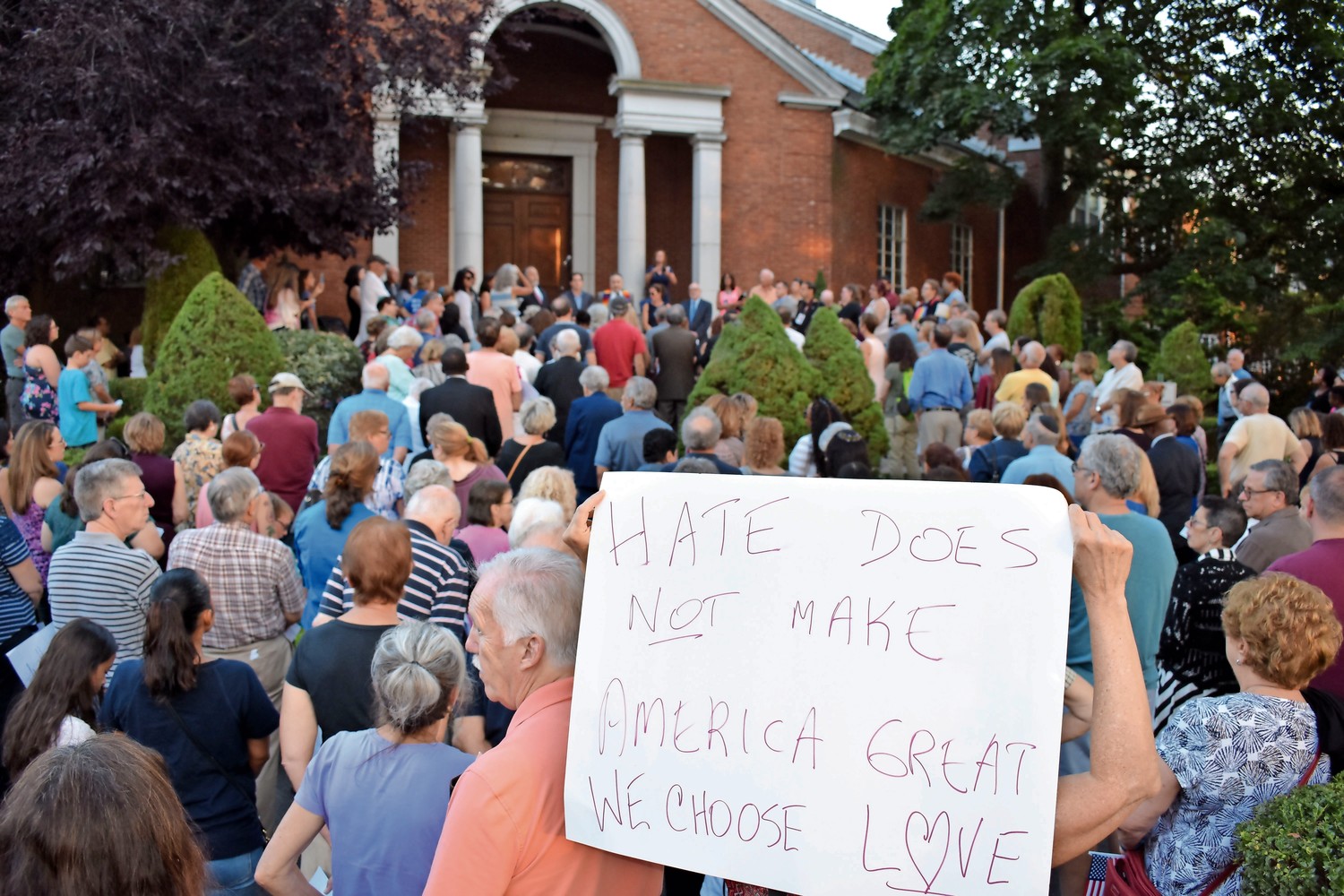 Residents gathered at Central Synagogue-Beth Emeth a year ago this week to denounce hatred in response to violence that grew out of a “Unite the Right” protest in Charlottesville, Va.
Ben Strack/Herald 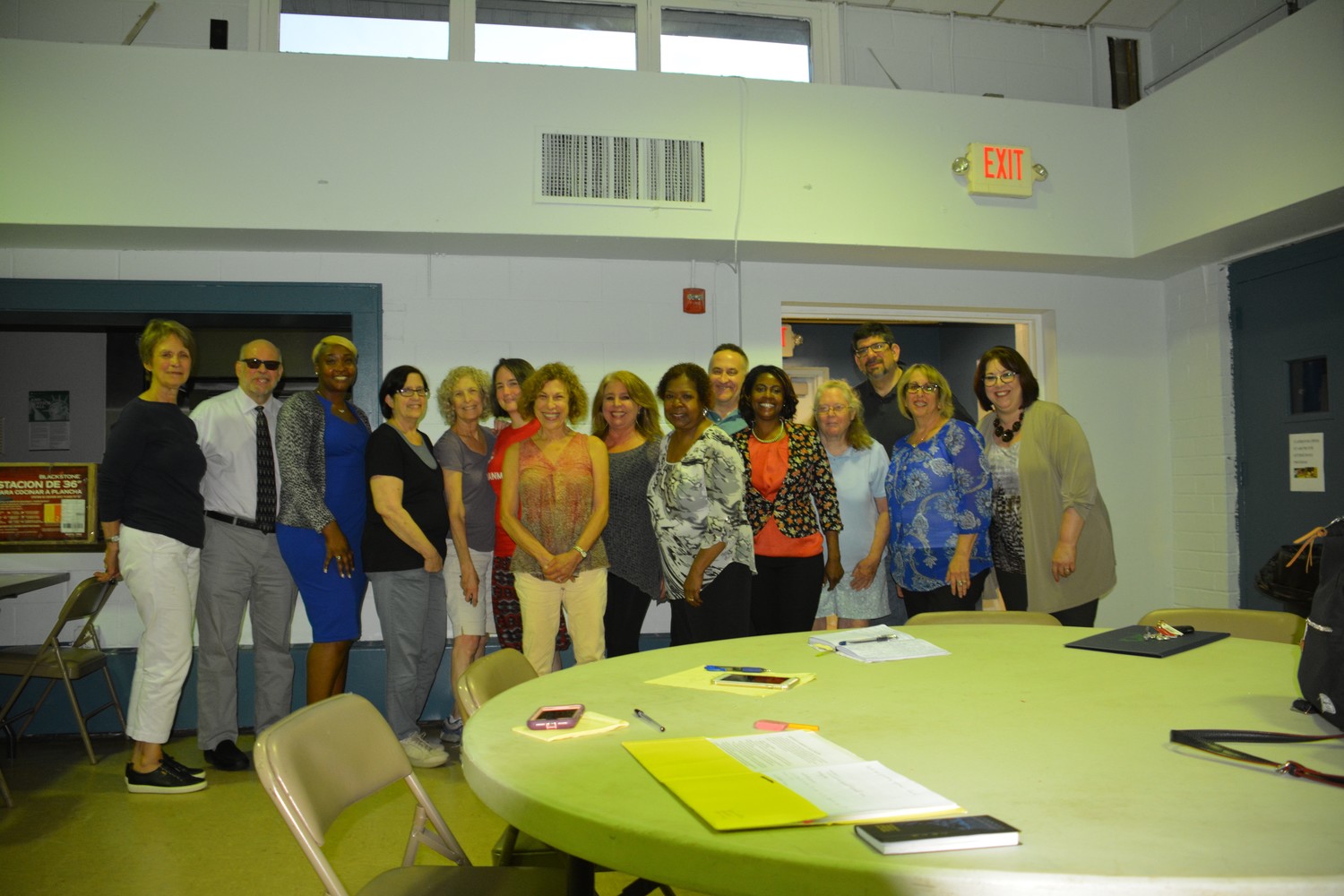 Members of various local organizations met over the past year in preparation for launching the Anti Racism Project, a free eight-week program that will begin in October, and encourage dialogue among neighbors.
Courtesy Rena Riback
Previous Next
By Ben Strack

“Do I see every day signs of overt racism?” said Rena Riback, who is leading the charge on the Anti Racism Project in Rockville Centre. “No, but you have to look beyond that.”
A year ago this week, South Shore residents gathered outside Central Synagogue-Beth Emeth to denounce hatred in response to violence that grew out of a “Unite the Right” protest in Charlottesville, Va. A year later, Rockville Centre community leaders are preparing to launch a free eight-week anti-racism program as part of an effort to start a dialogue among neighbors.
“We want to create a safe space where people can really dig down deep and discuss what makes them uncomfortable,” said Riback, who serves as Unity and Diversity Committee co-chairwoman for Raising Voices USA, a local advocacy and civic engagement group that formed shortly after President Trump was elected.
In April 2017, an unknown person drew a swastika on one tree and the N-word on another tree in white paint in front of a Brower Avenue home near Capitolian Boulevard, according to Rockville Centre Police Commissioner James Vafeades. He noted that the tree graffiti was the only recorded bias incident in the past three years.
In response, Emma Travers and Cindy Vaupel, co-founders of Raising Voices, gathered a group of community leaders to discuss how to take action against such hatred. “As always, we were trying to create a different narrative,” Travers recalled. “We’re trying to say that’s not how we define ourselves. We are going to choose how we define ourselves and make something very positive out of that.”


Around the time of the graffiti incident, Riback had taken a two-day seminar organized by Erase Racism New York that focused on institutionalized and internalized racism. She was determined to share what she had learned with others. “Add Charlottesville on top of that,” she said, “and it brought everything to fruition.”
Over the past year, local leaders from Raising Voices, the Hispanic Brotherhood of Rockville Centre, Central Synagogue-Beth Emeth, the United Church of Rockville Centre, the Sisterhood of CSBE and the village’s Dr. Martin Luther King Jr. Center have met to develop a curriculum for the Anti Racism Project, which will be open to a few dozen members of the public beginning in October.

Racism in Rockville Centre?
Riback was also driven to lead the Anti Racism Project to better understand what her adopted daughter, Gillian Geffen, who is Latina, went through growing up in Rockville Centre.
Geffen, 24, said she was raised Jewish and noted that her parents, who are both white, were involved at Central Synagogue. But because of her darker skin, people assumed the synagogue wasn’t where she belonged, and that she was the child of the custodian, who was Hispanic.
“As soon as they would find out who my parents were, it would completely change the attitude,” Geffen said, “and that’s kind of how it was . . . in town.”
Other students in school would mention that Geffen looked different from them, she said, and as she got older, it got tougher. In elementary school, she added, families of her peers knew her parents, so she did not face as much prejudice. In middle and high school, Geffen noted, “You just see people, see what they look like and make judgments based on that.”
Teachers assumed she spoke Spanish, and even some of her friends made racist jokes. If she didn’t react well to the joke, “People were just like, ‘Oh shoot, I forgot you’re not white,’” Geffen recalled. “‘My bad.’”
Riback said her daughter, through her experiences, taught her about white privilege, which is included in the Anti Racism Project curriculum. “We take for granted our place in the society based on unearned acceptance, based fully on our skin color,” Riback said.
Marguerite Keller, co-director of the Hispanic Brotherhood of Rockville Centre, said the Latino community around Long Island, and perhaps around the country, is currently facing a “hostile climate.”
Though she couldn’t recall any specific instances of racism in the village aside from the tree graffiti last year, Keller said she has noticed that fewer Latinos — documented or undocumented — come to the organization for help.
“People are very scared in this neighborhood,” she said. “They’re fearful of where their information would be [and] who could come to find them.”
According to the 2010 census, about 78 percent of Rockville Centre residents are white, 12 percent are Hispanic or Latino, nearly 6 percent are African-American and about 4 percent are mixes of two or more races. Riback noted the segregation of Rockville Centre — between the “West End” and the rest of the village — which she said is much like Long Island as a whole. Sharon Sheppard, of the village’s Dr. Martin Luther King Jr. Center, who Riback noted was involved in the project, had not responded to the Herald’s request for comment.
Rabbi Elliot Skiddell, of Central Synagogue-Beth Emeth, said there is a perception among people outside the village that it is what he called a “homogeneous community,” adding that he was unsure whether that perception was based on race or civic pride. He noted that Rabbi Marc Gruber, also of Central Synagogue, has greatly contributed to the anti-racism program, though he could not be reached before press time.
But racism exists nationwide, Skiddell said, and the graffiti last year raised concern. “It’s indicative of a need to discuss all of this . . . I don’t even know what to call it,” he said, pausing. “It’s more than prejudice. It’s a deep-seated almost fear of the other.”


A hope for understanding
With help from a group called Cultural Bridges to Justice, the Rockville Centre organizations are now putting forward a curriculum for the Anti Racism Project to the public during free sessions that are slated to begin on Oct. 9.
Six volunteer facilitators are expected to lead three 12-member groups of residents interested in participating in the program, Riback said. The initiative, which will be interactive and involve homework and readings, will delve into the history of racism in the United States, and address topics such as black identity, white privilege, building allies, and the ideas of institutionalized and internalized racism.
The Rev. Scott Ressman, pastor of the United Church of Rockville Centre, said he sees the program as a non-intimidating place to explore one’s own feelings and discover potential hidden traits that can be considered racist by others. He added that the goal is to “walk in someone else’s shoes” and see other people’s perspectives.
“I think racism is all throughout our society and our institutions everywhere, and we’ve become so used to it,” Ressman said. “As a white person, I just sometimes don’t see it like someone who is of color would see it and experience it, of course.”
Those interested in signing up for the program can visit www.antiracismproject.org. Participants will be chosen on a first-come, first-served basis, Riback said, and must commit to the eight weeks. To give a donation, which Riback said would be used for supplies, venue costs and refreshments for the program, visit www.gofundme.com/antiracism-community-education.
Geffen said she hoped the project would help bring to light issues that people often shy away from. “It’s just a really good opportunity to be exposed to the fact that racism does exist,” she said, “even if it’s not explicit.”