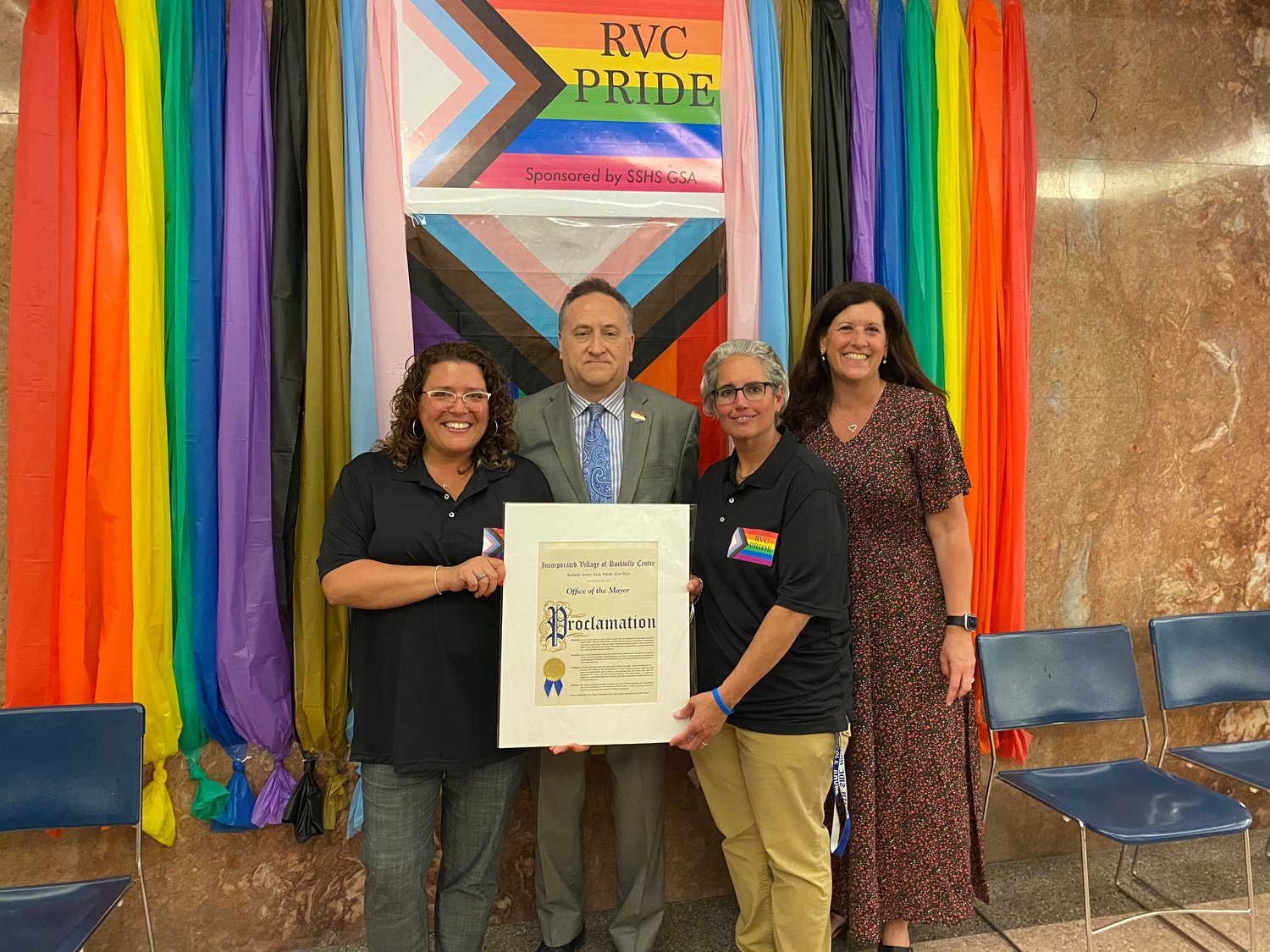 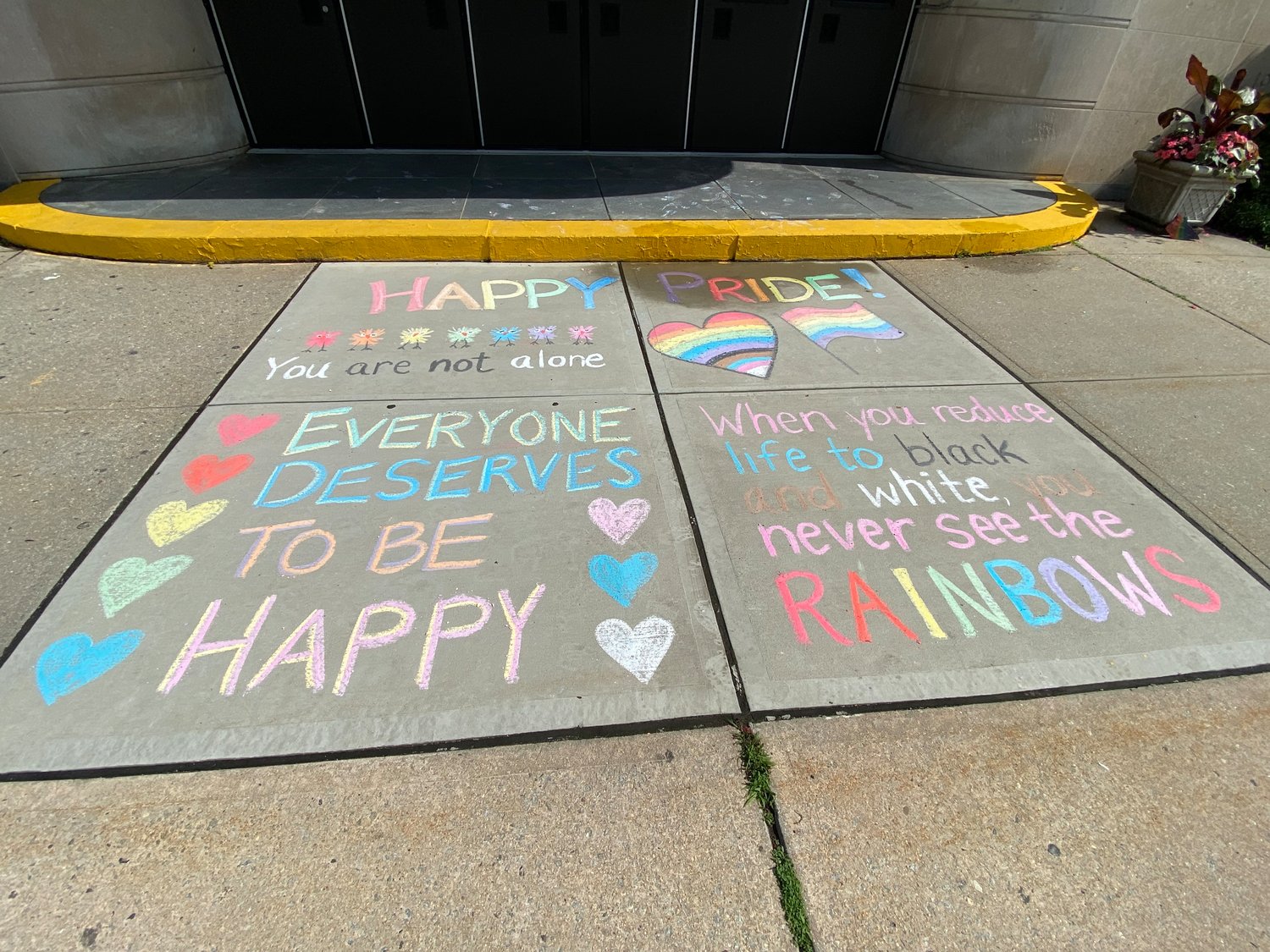 South side High School students created encouraging messages for the LGBTQIA+ community outside the school in recognition of Pride Month.
Tom Carrozza/Herald
Previous Next

"Nothing is more important than for students' voices to be heard."”
Christine Brown, Gay/Straight Alliance
By Tom Carrozza

As acceptance of the LGBTQIA+ community has grown, South Side High School and community groups have worked to continue to make students feel more welcome. On June 2, the RVC Pride Committee and the high school’s Gay/Straight Alliance received a Pride proclamation from Rockville Centre village officials.

RVC Pride members, South Side students and administrators and village officials packed into lobby of the high school with a large pride flag serving as the backdrop. The RVC Pride Committee is a small group of village residents who came together six months ago with the goal of promoting Pride Month and improving visibility for the local LGBTQIA+ community.

The Rev. Scott Ressman, of United Church on Morris Avenue, a member of the newly formed committee, said he planned to close Pride Month on June 26 with his annual pride service at 9:30 a.m.

At the high school on June 2, Ressman used his oratorical skills to stress the importance of acceptance and support for the LGBTQIA+ population. “It is a historic day for Rockville Centre,” he said. “An official recognition of the diversity of the village, and a powerful statement for those of us in the LGBTQIA+ community who worked for inclusion and witness to it by living each day with authenticity and courage. Rockville Centre Pride not only affirms you, but celebrates you for being wonderfully made. And our hope is to create a safe, caring and supportive environment, no matter where you are on life’s journey.”

Ressman said he hoped that RVC Pride could one day grow Pride Month in the village to mirror larger celebrations across the country and around the world. Last week’s event represented a dream he has had, he said, since he was in high school. “My gratitude to you is immense, as is my admiration,” he told GSA students.

GSA Co-administrators Christine Brown and Nicole Knorr, both South Side teachers, said they were excited to have official recognition from the village. Brown said that GSA students recommended the wording of the proclamation by doing research on similar proclamations around the country. The two have spent the past 19 years working together on the group since it was first called Students Making It a Little Easier, or SMILE.

Knorr and Brown commended South Side Principal John Murphy for his support of the club through the years, and for making the building a “safe and affirming place for the faculty to work.”

“Thank you so much for hearing their voices,” Brown said, addressing Deputy Mayor Kathy Baxley and Village Administrator Nancy Howard through tears. “Nothing is more important than for students’ voices to be heard.”

Former GSA member and 2021 South Side graduate Jackson Bacci, who was on hand for the event, said he was happy to see the current GSA students get the recognition they deserve. “It’s surprising,” Bacci said. “You never really see this kind of stuff in this town. It makes this town feel a little more welcoming, step by step.”

To conclude the event, the South Side Chamber Singers, led by Doreen Fryling, performed “Love is Love” for the dozens of attendees.

RVC Pride and the GSA spent the past month distributing pride flags to be displayed in the windows of participating businesses in the village, and worked with local houses of worship, like Central Synagogue-Beth Emeth, to display the flags at their entrances. Students distributed more than 150 flags and stickers throughout the village.

“Those of us who have been around a little longer know how important this is,” Murphy said of the proclamation event. “I know it’s important for you and I know it’s made great strides, but how great a stride it is here and now, I can’t put words to it. It’s a big deal.”