RVC church property repurposed in memory of a ‘Backyard Player’

Space behind St. Mark's for those of all abilities 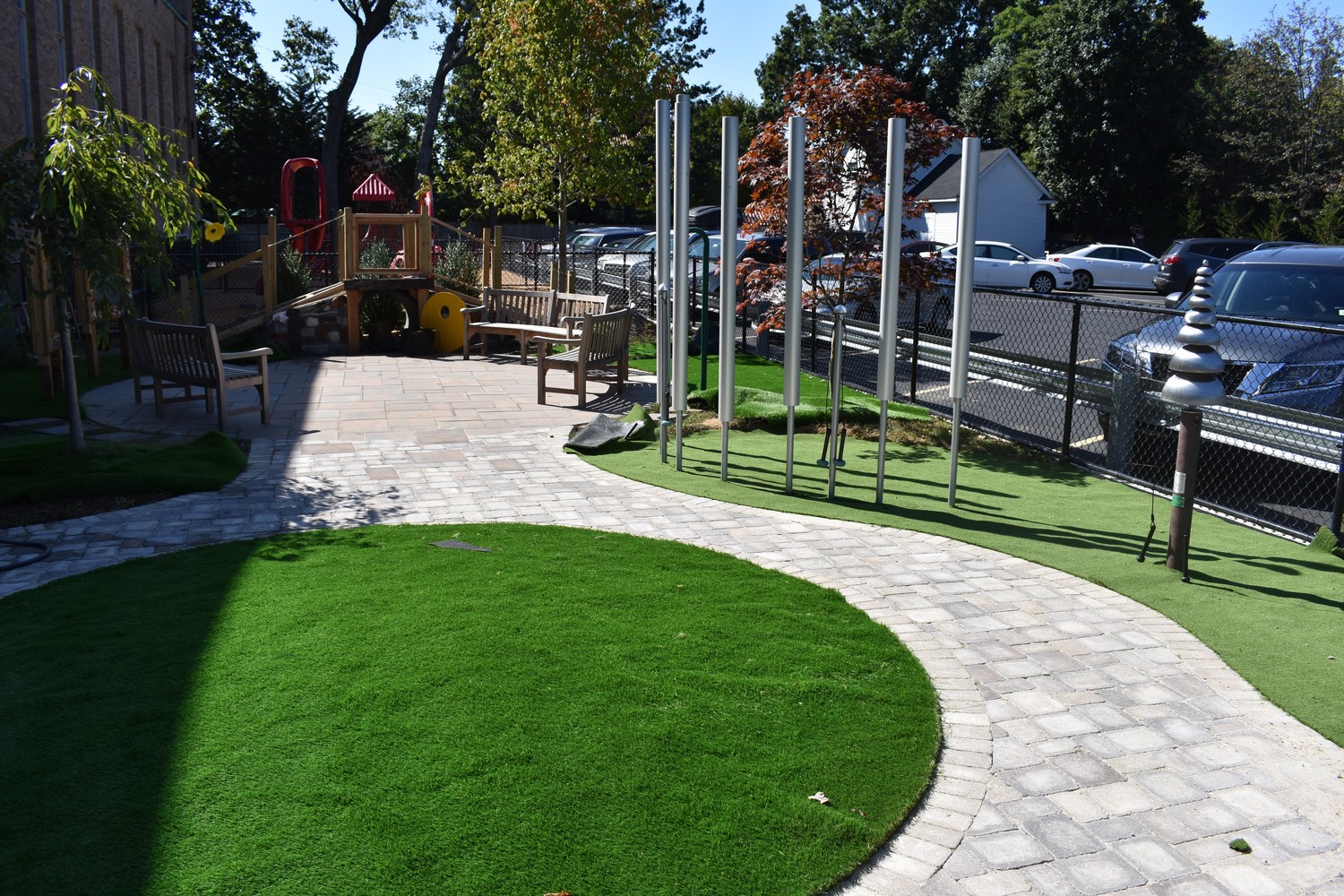 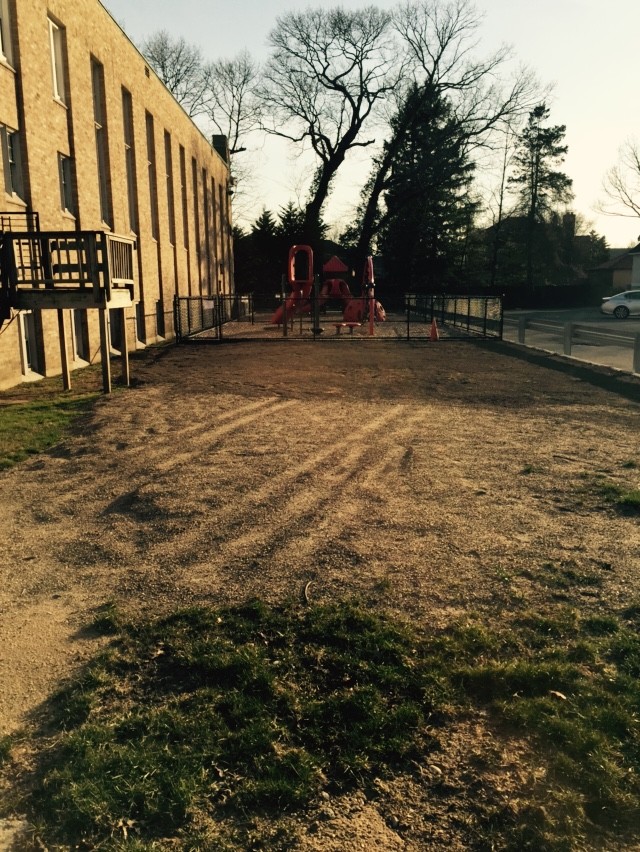 Before the project, the land sat vacant.
Courtesy Ellen White 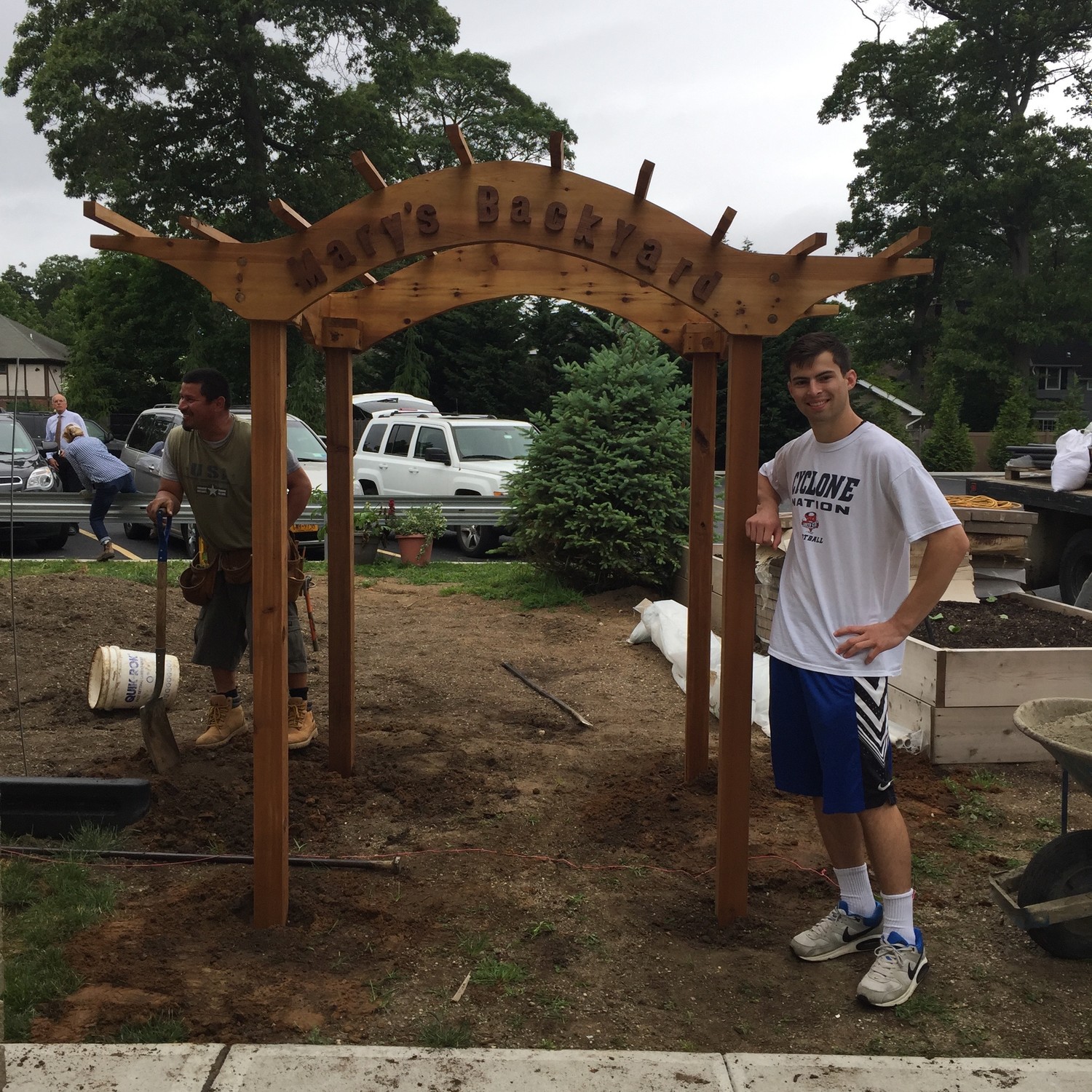 Tyler Wukitsevits, a freshman at Bucknell University who graduated from South Side in the spring, built the archway to Mary's Backyard.
Courtesy Ellen White 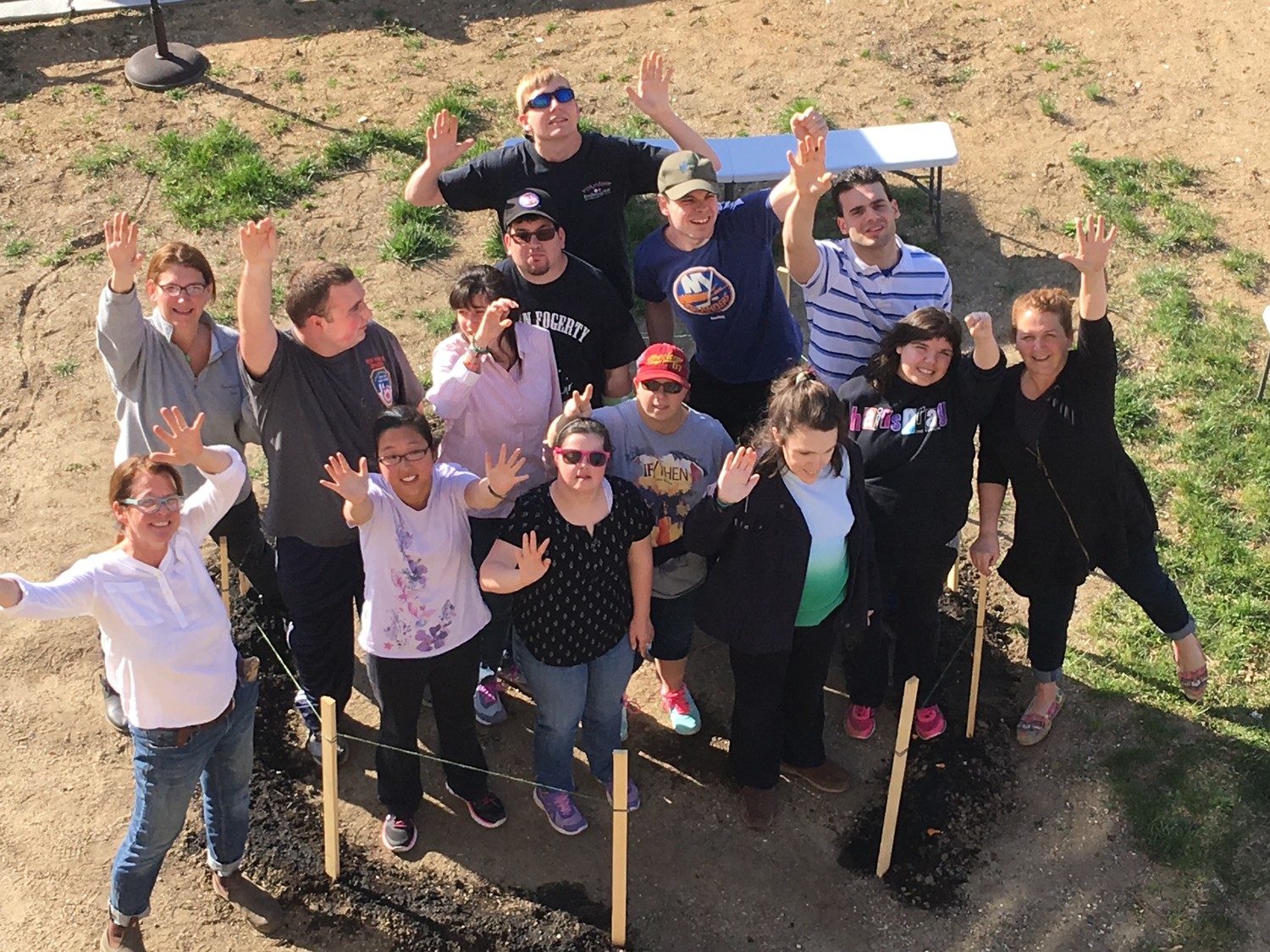 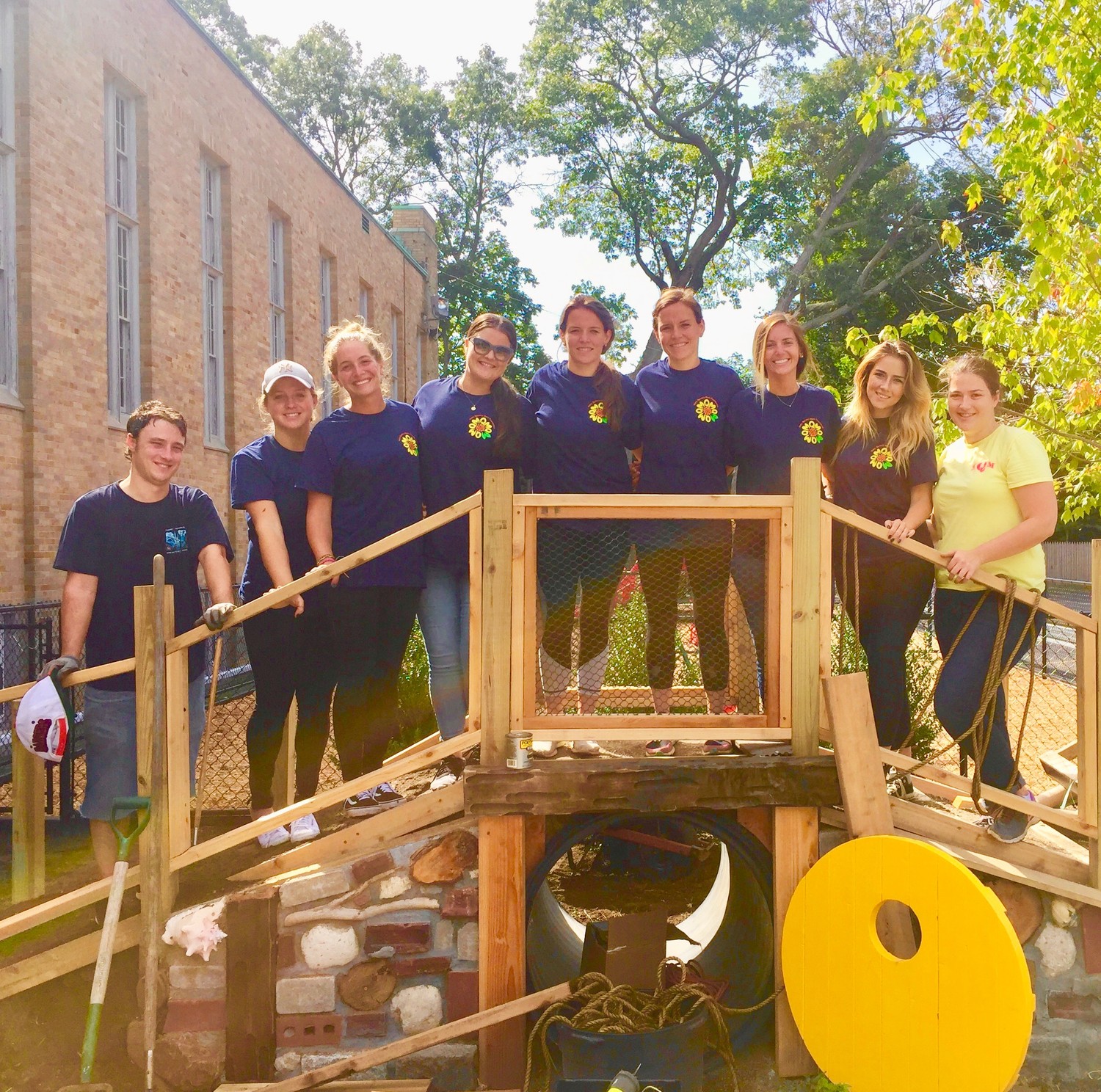 The Mary Quinn's Mark Foundation contributed $25,000 to get the project started, as well as time and effort.
Courtesy Ellen White
Previous Next
By Ben Strack

Ellen White, founder of Rockville Centre’s Backyard Players & Friends, picked up a rock painted with the word “Peace” while sitting in a 30-by-80-foot plot behind St. Mark’s United Methodist Church. “There’s a lot of crazy things going on in the world,” she said, pointing to another that read “Love.”

“Sometimes you think there’s nothing that you can do,” White continued. “But you know what? You can do something in your own community that can make a change or start a conversation, or just bring people together for no other reason than just to create community.”

She looked around the space, which sat vacant a year ago, now named Mary’s Backyard in honor of Mary Quinn, a Floral Park girl actively involved in Backyard Players. She was born with Down syndrome, and died in 2015, at age 16. “That’s what this is going to do back here,” she said.

White, who directs South Side High School’s Centre Stage, a program in which general and special-education students collaborate to put on performances each spring, formed Backyard Players about five years ago, recognizing the need for more services for those with developmental disabilities after they graduated. It officially became a nonprofit organization in 2015.

What started as five people in a small theater program now offers a variety of programs for more than 100 teenagers and young adults. Mary was one of them, joining Backyard Players’ yoga and theater programs.

“She was just hilarious,” White said. “She was sassy and sparkly and just added so much to everything that we did, especially in the theater.”

The group hosts programs at Molloy College, the Rockville Centre Recreation Center and St. Mark’s, and one day nearly two years ago, White recalled, she saw the empty land behind the church, at 200 Hempstead Ave., and thought it would be perfect for the outdoor space she had wanted to create to facilitate more programming. St. Mark’s agreed to let White use the area, and she teamed up with the Quinn family, which formed the Mary Quinn’s Mark Foundation shortly after her death. Its first big fundraiser last year in Floral Park raised about $25,000 to fund an inclusive space for people of all abilities.

“The whole mission of that space is that it’s going to house programming for not only people with disabilities, but people who are typical,” said Mary’s sister, Kathleen Quinn, “so that you can foster that relationship between a typical peer and an individual with a disability, and it can be a natural friendship.”

Mary attended Our Lady of Victory in Floral Park, Kathleen explained, and became one of the first students with a disability to be “mainstreamed” into a Long Island Catholic school. Her infectious personality gained her friends, many of whom were typical, Kathleen added, which helped Mary show how a child with a disability could be included in the community.

“She was basically like the definition of inclusion,” Kathleen said, adding that the space will symbolize that sentiment for those who visit. “We basically treated her as if she didn’t have a disability and it really helped her long-term.”

Rockville Centre resident Maggie Gray, a horticulture specialist for the Long Island Children’s Museum who designed the space, said it encourages visitors to enjoy the outdoors and use their senses. The plot, covered with brick and artificial grass, is adorned with small trees, and features drums, tall bells that visitors can play with mallets, an art station and a bridge over what White called a “hobbit hole,” meant to inspire imagination.

“In trying to incorporate Mary Quinn’s spirit into this space … there was an opportunity to provide a sense of wonder, or a place where people can come and connect in a positive way with a snippet of nature,” Gray said.

The space will be open to the public, and can be used for Backyard Players programs and workshops, White said, as well as musical performances and other community events.

“Everything that’s here has been touched by a lot of different groups,” White noted as she scanned the property.

The selection of Backyard Players as the beneficiaries of Rockville Centre’s St. Patrick’s Day parade last March, in part, accelerated support for the organization. Since then, White has received donations from many groups and individuals, including the RVC Conservancy, the Tommy Brull Foundation, the Jillian E. Daly Foundation and Marty Bevilacqua, owner of Oceanville Mason Supply in Oceanside, to build Mary’s Backyard.

South Side High School’s Habitat for Humanity club donated planters and helped build the hobbit hole, and members of the boys’ soccer team also lent a helping hand. Tyler Wukitsevits, a freshman at Bucknell University who graduated from South Side in the spring, constructed the cedar archway — with mahogany letters spelling out “Mary’s Backyard” — for his senior project over the course of about seven weeks.

“It was a very special thing,” he said. “It was heart-warming to see it go up, and once the playground opens, it’s going to be awesome to visit.”

Brian Birk, president of St. Mark’s Church’s board of trustees, said the church was happy to donate the land, which has sat vacant for as long as he could remember. “It’s absolutely beautiful; it’s stunning,” he said. “It’s much more than I ever could’ve imagined. …When it comes to life the way it has, it’s extremely exciting.”

The space also includes a free library box, where people can share books, and a circular patch of grass in the middle where community art projects will be displayed. White said the possibilities for the space, which will have its official opening on Oct. 21, from noon to 3 p.m., are endless.