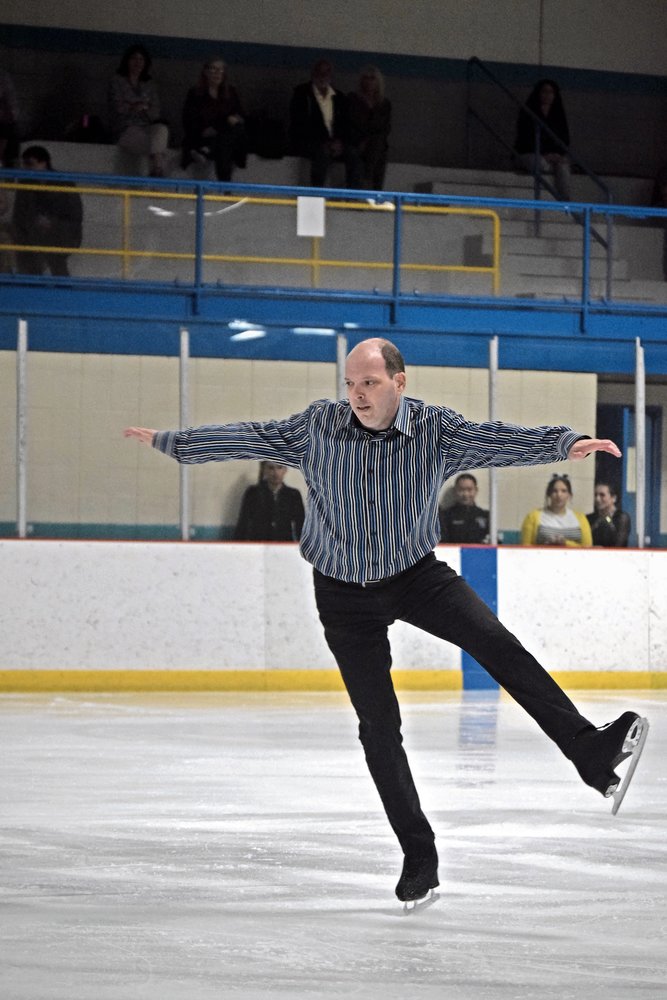 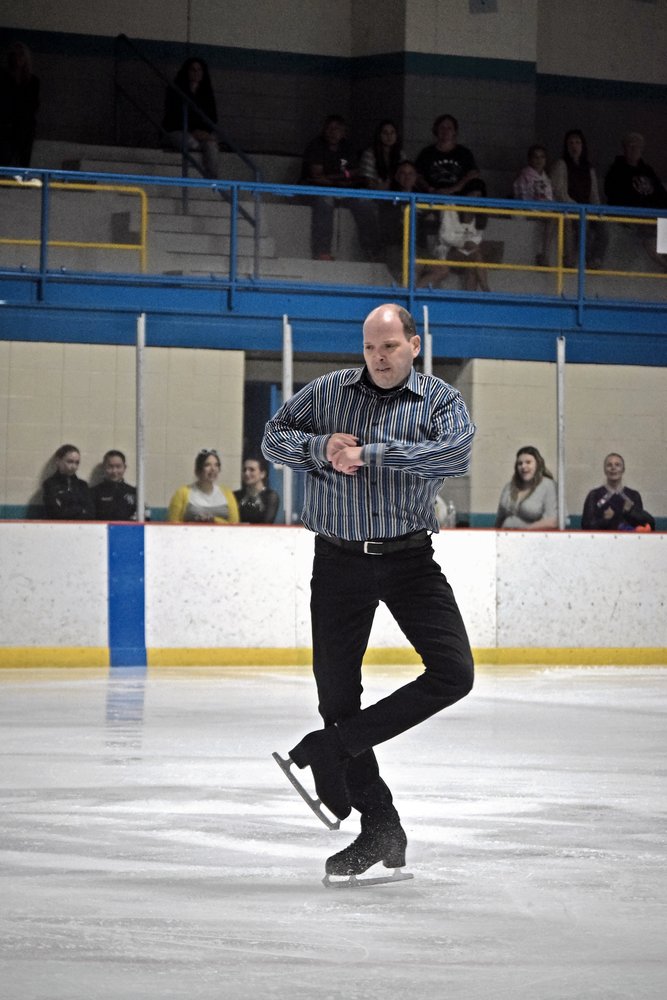 Mark Getman shook off the rust from a 30-year hiatus and performed at The Rinx in Hauppage in July.
Jeffrey Bessen/Herald
Previous Next
About adult figure skating in metro area

“The New York City and Long Island adult skating community is a close-knit group that welcomes skaters of all ages and abilities,” Levine wrote in an email. “The community is vibrant and very active in competitions, exhibitions, clinics and the Skating Club of New York events.”

“Clinics such as Skate & Sculpt and the Ice Dance Social are popular programs for the community,” Levine stated. “All of the programs combine skating with the opportunity to socialize with those who have a common passion — ice skating.”

More than 30 years after Mark Getman was on the ice in front of a crowd to figure skate, the nearly 50-year-old Cedarhurst resident took part in the Summer Celebration Exhibition hosted by the Skating Club of New York at The Rinx in Hauppauge last month.

Getman, 49, was the tallest and largest skater as nearly every other person who hit the ice was female and younger, with five adults taking part. However, during the program, Act 3, that Getman skated in he received the largest applause.

“I heard the applause, I heard the crowd,” he said laughing only a few minutes after he finished his skate program. “I guess because I was the only guy, adult guy. I guess you could say I’m unique; it’s not common. I’m guessing they were glad to see some diversity.”

A competitive figure skater in his youth, along with his twin brother Steven, Getman had a hankering to return to the sport. He remained tied to skating, skating in regular skates, he said. Seeing adults competing, his competitive flame was relit.

“It means a lot, coming back because I did this 30 years ago and it just reminds me how much fun it could be, how exhilarating it could be,” Getman said. “Just great to be part of all the skaters and see them all going out there and doing their best. It’s not a competition, but there’s a little stress, but it was good to be out there.”

In Act 3 of the three-act July 10 program there was at least one person taking part who could emphasize with Getman. Belarus native Elena Skavinskaya, who now lives in Port Washington, has also returned to the sport of her youth.

Figure skating when she was 6 and 7, Skavinskaya said with everyone figure skating in the former Soviet Union she did not reach the higher level and eventually her parents withdrew her from the skating program.

“I haven’t done it for a long, long time,” he said about figure skating. “I was actually a swimmer. Was on the national team as a swimmer. Then I moved to the states, I picked it up in Chicago. Went for outdoor skating one, ummmmm I like it. Went a few times. Bought some skates, asked some lady to teach me. Started to take lessons.”

Skavinskaya moved to New York City I 2004 began skating seriously two to three times a week. During the Covid pandemic, she moved to Port Washington and began figure skating at Iceland in New Hyde Park, in Syosset and occasionally in Great Neck.

With a field coach and a style coach, Skavinskaya has taken part in competitions and has placed fifth in nationals, second in sectionals and captured the top spot in two events, including the Boston Colonial. “When I started to skate it was a bit more difficult,” she said. “I think adult skaters were not taken seriously, but now I think it a bit better. There are more adult skaters. There is a community and I feel good about it.”

Getman is aiming to be a part of that community. He has his U.S. Figure Skating card for 2022-2023 and plans to enter the competitions that begin in the fall. Getman returned to his practice schedule a week after the showcase.

“I felt that I did pretty good for my first ice skating showcase in 30 years,” he said. “Some slips may be the ice or may be nerves, but I kept going. I made a mistake somewhere, but I just kept going and I finished the program.”