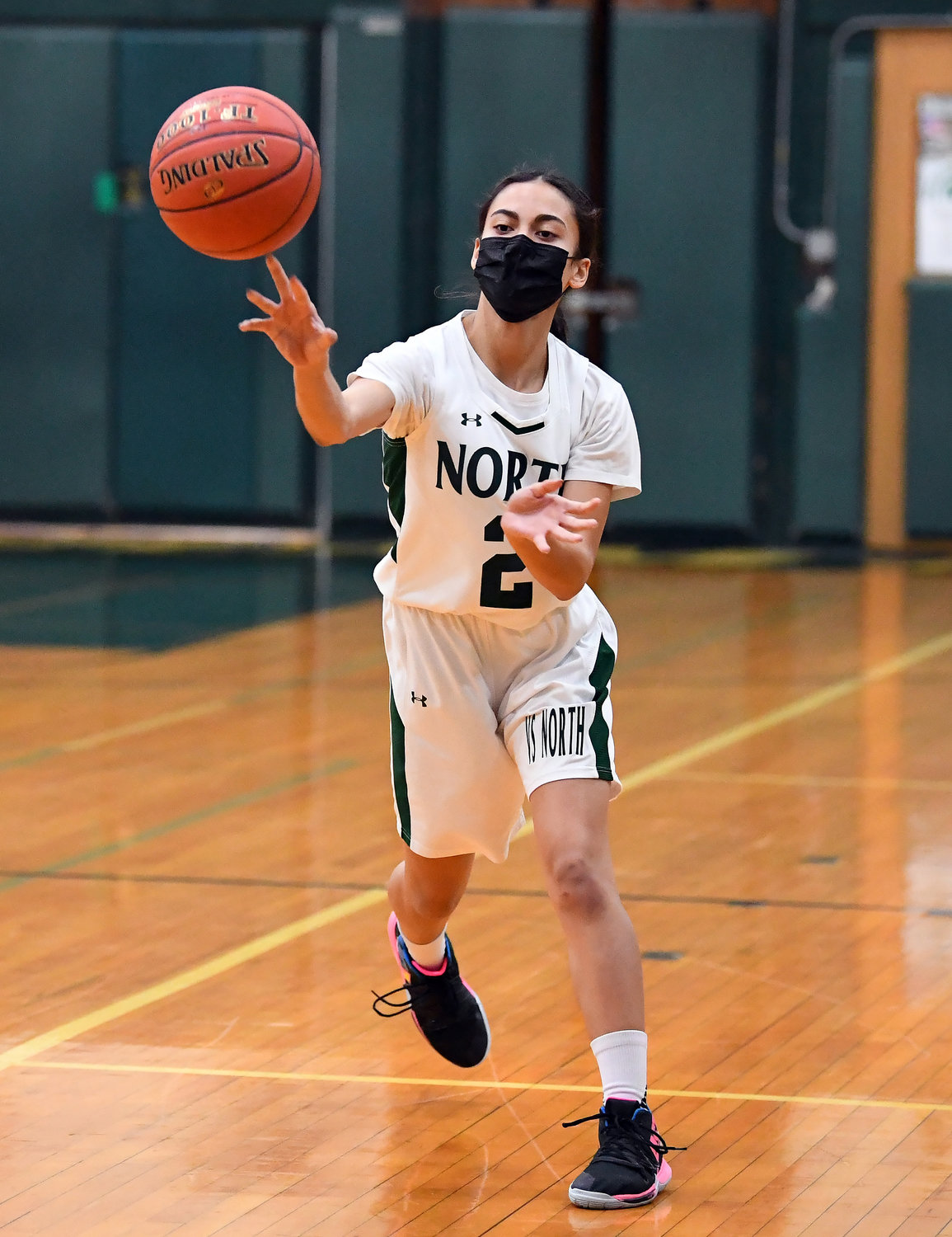 Sophomore Alyanna Nadal scored 10 points on Jan. 20 as the Spartans improved to 5-7 overall with a non-conference victory over Glen Cove.
Neil Miller/Herald
By Brian Kacharaba

Juliana Russell was at the right place at the right time to help give the Valley Stream North girls’ basketball team its most thrilling win of the season.
Russell put back an offensive rebound with less than a second left and Isabella Feldman had her best game as a varsity player with 20 points as the Spartans won for the second time in three games following a four-game losing streak with a 49-47 win at Glen Cove on Jan. 20.
Alyanna Nadal scored 10 points and Kayla Santo returned from a lengthy injury absence to record eight for North (5-7, 1-5 Conference A-3), whose point total was seven more than their previous two games combined.
“It was such a great environment,” head coach George Karahalios said. “It was a back-and-forth game. They would go up by five points and we would go up by five points and then they tied it at the end and then Juliana Russell came up big.”
Nadal’s two free throws gave the Spartans a 47-44 lead with 21 seconds left in regulation and Glen Cove frantically tried to tie the game as the clock wound down. The Big Red missed their first two attempts from long range but maintained possession before banking a third off the glass with six seconds left.


Karahalios called a timeout to get the ensuing inbound pass at the halfcourt stripe and didn’t sense a defeatist attitude in the huddle because the basket only tied the game.
“They remained positive because we weren’t down,” he said. “It was 0-0 with six seconds left. They had a good mindset. Six seconds was more than enough time.”
On the winning play, Feldman inbounded the ball to a streaking Nadal up the right sideline. The sophomore cut towards the paint, where she appeared to lose her footing as she attempted a shot. The ball bounced off the right side of the rim before falling to Russell, who quickly volleyed the rebound through the hoop.
“We got the ball to Alyanna, Alyanna was able to drive to the hoop and she had a pretty decent look and then Juliana was there to follow to clean up,” Karahalios recalled. “Sometimes that’s all you need.”
Feldman, an offseason JV callup along with Nadal, buried six 3-pointers in the game, including two in consecutive possessions early in the fourth quarter that gave North a 36-29 lead. Her previous best point total was nine against Hewlett on Dec. 21.
“She’s finally doing what she’s capable of doing,” Karahalios said. “She was in a slump for a bit, but she knows what she can do and she was able to drain six 3’s.”
Santo and junior Elena Magno both had “major” injuries in the Hewlett game. Magno was producing just over 14 points a game before her season-ending setback and the offense overall averaged just under 26 points during the four-game losing streak which followed a 3-1 start.
Nadal has tried to pick up the slack with three double-digit point games in her last four appearances.