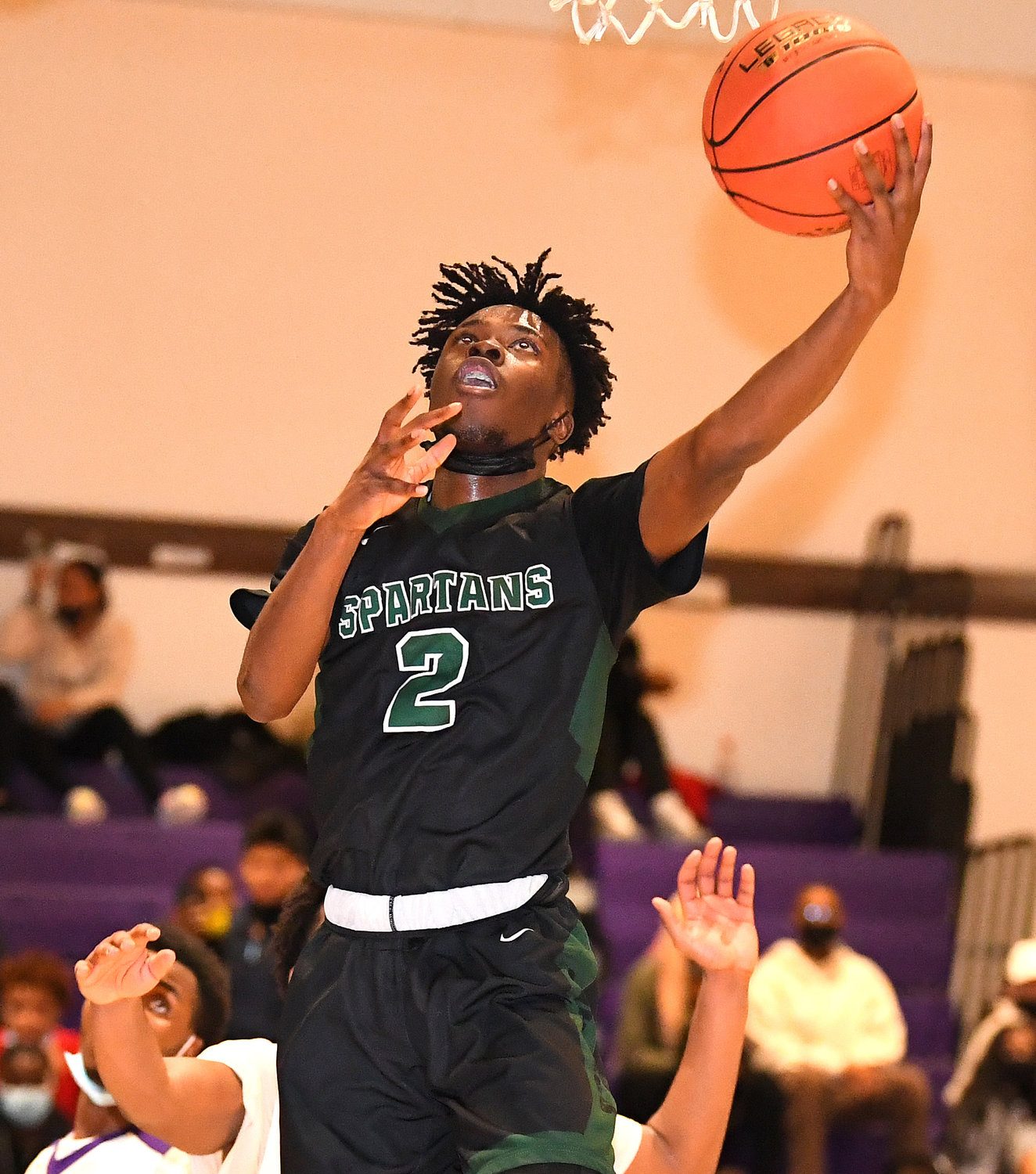 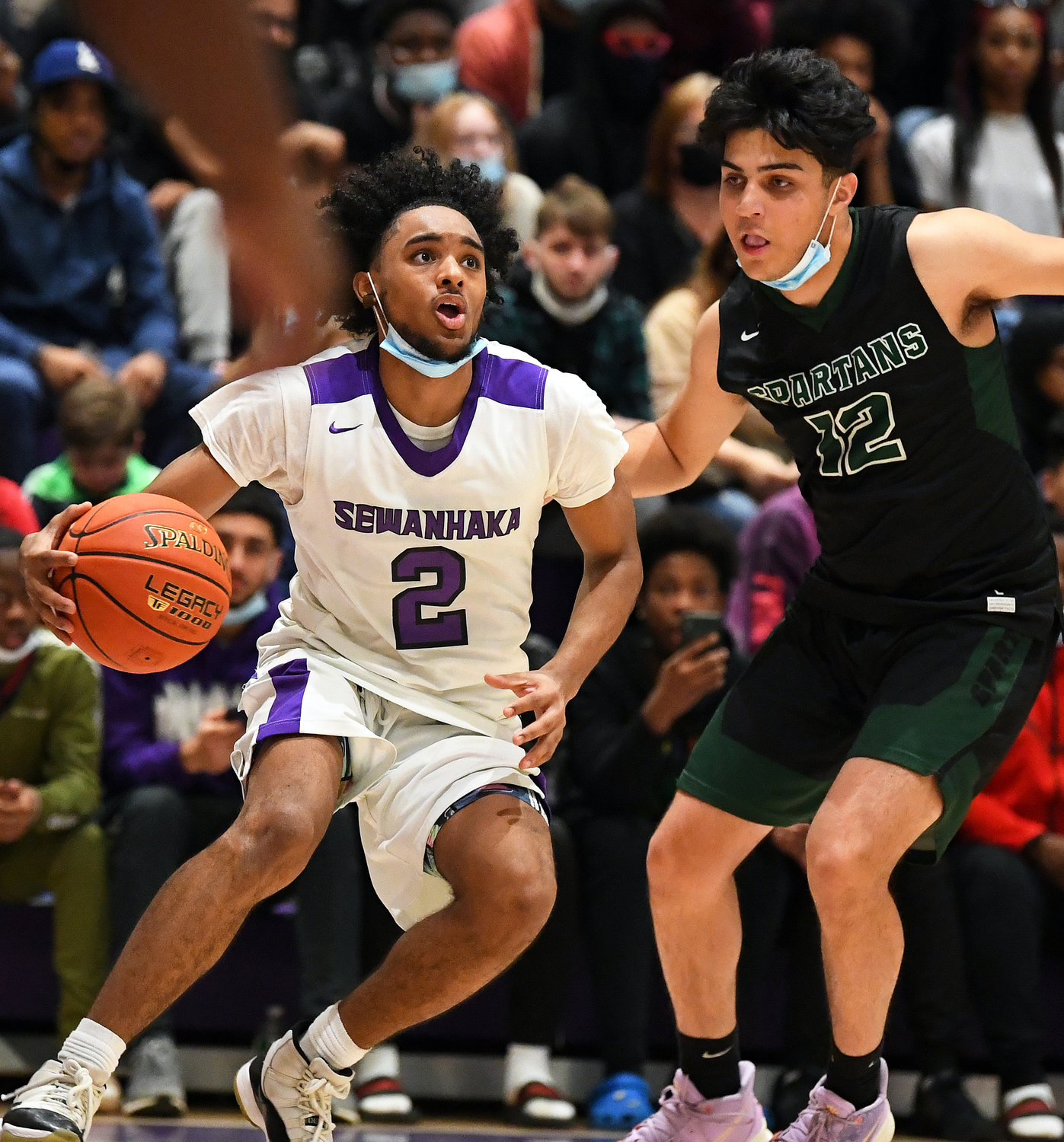 Behind seniors Godwin Eyiuche (17 points) and Malcom Harrington (16), No. 10 Valley Stream North upset second-seeded Sewanhaka in a thrilling Nassau Class A boys’ basketball quarterfinal playoff matchup Feb. 23, 58-44.
It was the epitome of a playoff atmosphere, with both fan bases as vocal and emphatic as a school could ask for. Valley Stream North head coach Michael McVeigh thought this win represented the selfless and hard-nosed attitude the team has demonstrated this season.
“We don’t care who scores,” McVeigh said. “We are going to play defense and we are going to play together and that’s what we did.”
Defensively is where the Spartans shined, as the team’s zone defense prevented Sewanhaka from ever finding a rhythm or from generating easy looks. The Spartans held the Indians to only 16 first-half points. This gave the Spartans enough cushion for them to secure the victory in the end.
Offensively, North’s ball movement and shot making ability was a night and day difference following the halftime break. Eyiuche was the central playmaker, as his fearless takes to the basket were a central catalyst in the Spartans’ third-quarter run. Eyiuche thinks this win embodies the team’s strong and resilient demeanor.


“We were the underdogs coming in,” Eyiuche said. “We weren’t scared from the jump, and we just wanted to show everybody how hard we play and that we were ready for the moment.”
Eyiuche was the game’s leading scorer and added five assists, but it was a balanced effort for the Spartans. Harrington was a steady presence at the rim. Sophomore Dom Obukwelu had 12 points and senior Gio Grey added 7.
Valley Stream North, which edged No. 7 Lynbrook by a point in the first round, will face third-seeded Garden City in the semifinals on March 1 at 6:30 p.m. at Hofstra University. The winner will face either top-seeded Manhasset or No. 5 South Side in the county title game this Saturday at 5 p.m. at Hofstra.
For Sewanhaka, it was a premature ending to what had been a terrific season. The team played hard all afternoon, but the shots just didn’t fall. Indians head coach Jay Allen had nothing but respect for North’s performance.
“All the credit goes to coach McVeigh and their players, they played a great game from beginning to end,” Allen said. “They were well prepared and ready for the moment, and they played extremely well.”
Sewanhaka dug too deep a hole. The Indians, who entered the game on a 14-game winning streak, attempted a late comeback but couldn’t generate enough offense.
Senior J’Den Lloyd was a beast on the interior, as all of his 14 points came from well-earned buckets at the rim. Senior Chris Cherry had 11 points and was seemingly the only player for the Indians who could get anything going from beyond the perimeter. The senior backcourt duo of Tyler Harts and Kamren Denhart assumed much of the ball handling responsibilities as they have all season and finished with 9 and 10 points respectively